This house was once home to Frank R. Lillie, a renowned zoologist and pioneer of embryology. He was also the first president of the Woods Hole Oceanographic Institution. He began working as an Assistant Professor at the University of Chicago in 1900 and was appointed to chairman of the Department of Zoology in 1910. In 1931, he was appointed to Dean of Division of Biological Sciences. He was born in Toronto, Ontario, Canada in 1870 and moved to the United States in 1891 to spend the summer studying at the Marine Biologicak Laboratory (MBL) in Woods Hole, Massachusetts. He passed away in 1947. 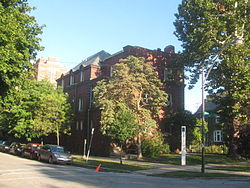 Diagram of a human embryo 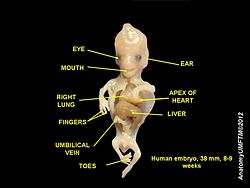 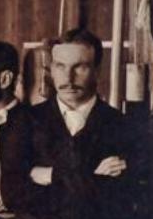 Embryology is the study of th development of embryos and fetuses. This includes studying the development of gametes (sex cells) and fertilization. The field also includes the study of disorders that occur before birth. Embryology in some form has existed essentially as long as science itself. However, great strides in embryology occurred during the time Lillie was living and working. Up until the eighteenth century, it was largely thought that miniature embryo existed in semen and simply became larger during development.
Lillie's early embryological research focused on the beginning stages of development in invertebrates and egg cleavage. Cleavage is the term for the division of cells in an early embryo. Between the years 1910 and 1921, his research focused on fertilization in a type of annelid, scientific name Nereis limbata and the sea urchins Arbacia  punctulata, Stronglyocentrotus franciscanus, and S. purpuratus. Lillie's research argued that the substances fertilizin and antifertilizin were secreted by the egg and sperm. This work was significant because he applied concepts used within immunology to fertilization by proposing that gametes interacted similarly to antibodies and antigens.
Lillie retired from the University of Chicago in 1935; however, he continued his research tirelessly. He served as the president of the National Academy of Sciences from 1935-1936 and as the chairman of the National Research Council from 1935 to 1936.