The members of the Nurse Corps were the first women to be recognized members of the United States Army on February 2, 1901. On that date, the Army Nurse Corps became a permanent part of the Army Medical Department under the Army Reorganization Act. This historical marker commemorates the history of the women who served in the Corps at the U.S. Army General Hospital of the Presidio, the very first military facility to employ Corps nurses. Two buildings were constructed in 1915 and 1916 to house the San Francisco Nurse Corps; one of these was later named Thompson Hall in honor Dora E. Thompson. In addition to being one of the first and longest-serving members of the Corps, Thompson achieved the rank of captain and served from 1902-1932. 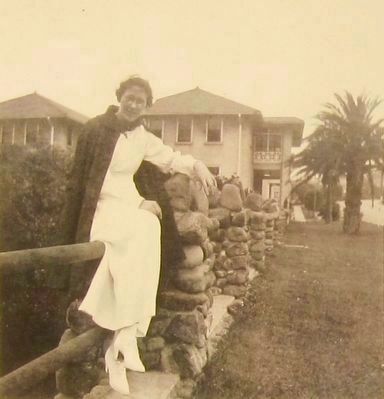 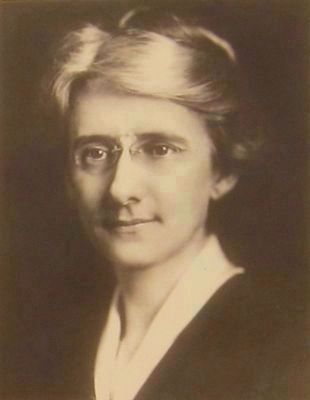 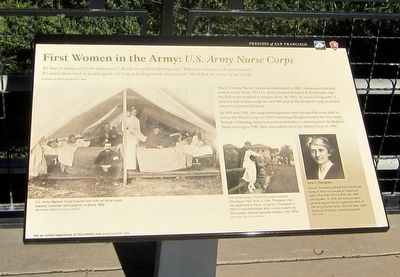 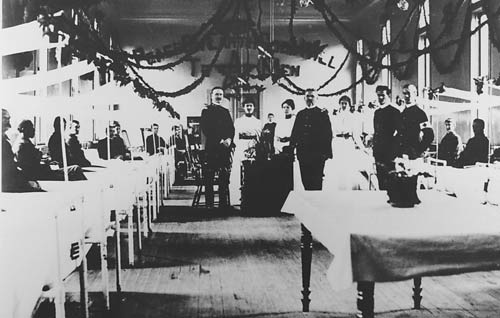 Nursing shortages during the Spanish-American War (April-August 1898) inspired military leaders and the Surgeon General to create a reserve corps of nurses in 1899. The all-female Army Nurse Corps became a permanent part of the Army Medical Department under the Army Reorganization Act on February 2, 1901. Though female nurses had volunteered their services to the military from the first days of the American Revolution, the members of the Nurse Corps were the first women to officially be part of the United States Army.

Between the creation of the Nurse Corps and 1911, the members of the corps served at three locations: the Philippines, Fort Bayard in New Mexico, and San Francisco. The U.S. Army General Hospital of the Presidio of San Francisco was the first to employ Corps nurses. Later, more branches of the Corps were opened and the Red Cross enrolled additional nurses.

One of the buildings that housed the San Francisco Nurse Corps was named Thompson Hall in her honor of Captain Dora Thompson. Thompson was born in the state of New York in 1876 to a Canadian-born father. Thompson's mother died when she was only five years old, and she was raised by her aunt, Alma Armstrong. Thompson trained as a nurse and, in 1897, graduated from City Hospital, Blackwell's Island, New York City. She took postgraduate courses on operating room methodology, practicing private nursing on the side. In 1902, she joined the Corps and was assigned to the Army General Hospital at the Presidio of San Francisco. Three years later, she was promoted to chief nurse. During the 1906 San Francisco earthquake, it was Dora Thompson who led the Corps in disaster relief. She transferred to Manila in 1911 and was named superintendent of the Nurse Corps on September 22, 1914.

When the United States entered World War I in 1917, the Army had only 403 active nurses. A year later, with joint efforts by the Army Department of Medical Relief and the American Red Cross, there were 21,460 members of the Nurse Corps, 10,000 of them serving overseas. The Army School of Nursing opened at San Francisco's Letterman Hospital on May 25, 1918. African American women were admitted for the first time, though segregation policies delayed their deployment until after armistice was declared.

Dora Thompson, as superintendent, guided the Corps through the war, but afterward spent a month of sick leave at a nurse's rest home, Greystone, in New York. She was awarded the Distinguished Service Medal by Secretary of War Newton D. Baker in November of 1919. The following month, Thompson resigned as superintendent and applied for the position of chief nurse at the Department Hospital in Manila. Julia Stimson succeeded her as superintendent and requested Thompson be appointed as the assistant superintendent. Thompson accepted and returned to the United States in 1922, as chief nurse of Letterman General Hospital in San Francisco's Prisidio, the only standing building of the hospital complex now houses the Tides Thoreau Center. Other buildings were razed to create the current Letterman Digital Arts Center, headquarters of Star Wars' LucasFilm, LucasArts, and Industrial Light and Magic.

Though Army Nurses were paid roughly half that of their male counterparts and continued to be addressed simply as "Miss", they were granted rank (Second Lieutenant to Major) and insignia in 1920. During the '20s, Corps nurses lobbied for full military status and were partially rewarded in the following decade with full pay and allowance for attending postgraduate courses.

During World War II, 57,000 Army Nurses (the largest number of active Corps Nurses in the history of the organization) served on ships, trains, flying ambulances, and hospitals. Some became Japanese prisoners of war, others cared for patients in foxholes at Anzio, and others served in evacuation hospitals at Normandy. In the aftermath of the war, Army nurses cared for victims of the atomic bombing of Hiroshima, displaced people in camps at Munich, women, and babies at Hamburg, and psychological patients at Heidelberg. The Nurse Corps achieved full military status in 1947.

Dora Thompson retired on August 31, 1932, but continued to live in San Francisco on money made in a Philippine gold mine investment. She died on June 23, 1954, and the women officers' quarters of Letterman General Hospital were renamed in her honor the following year.

The U.S. Army Nurse Corps was established in 1901. Nurses were the first women in the Army. The U.S. Army General Hospital at the Presidio was the first Army hospital to employ them. By 1902, 41 nurses along with 11 military and civilian surgeons and 180 men of the Hospital Corps provided care at Letterman Hospital.

In 1915 and 1916, two large buildings were built beyond this stone wall to house the Nurse Corps. In 1918, Letterman Hospital hosted the first Army School of Nursing. Army nurses received military commission to the Regular Army starting in 1947. Men were admitted to the Nurse Corps in 1956.

Dora E. Thompson joined the Nurse Corps in 1902 and played an important role in the relief efforts after the 1906 earthquake. In 1914, the Army surgeon general appointed her superintendent of the Army Nurse Corps. She was later Chief Nurse at Letterman General Hospital. Note also that she held the relative rank of Captain, and that she retired in 1932 after more than 30 years of service.

Built in 1916, Thompson Hall was dedicated in honor of Dora E. Thompson in 1955. It was demolished after nurses moved into the modern medical barracks nearby in the 1970s. Note that the nurse depicted is sitting, approximately, at the marker site. It should be noted that Thompson Hall was not actually demolished until 1988.