Built around 1810, this farmhouse was the home of Isaac Norfleet, US marshal of the district, and now serves as a museum, library and classroom for the Historic Preservation program at Edgecombe Community College. The house was renovated by students in the program and the family cemetery is across the highway.

The exterior facade of the (ca 1810) farmhouse with a replicated front porch based on ghost marks discovered during the renovation. 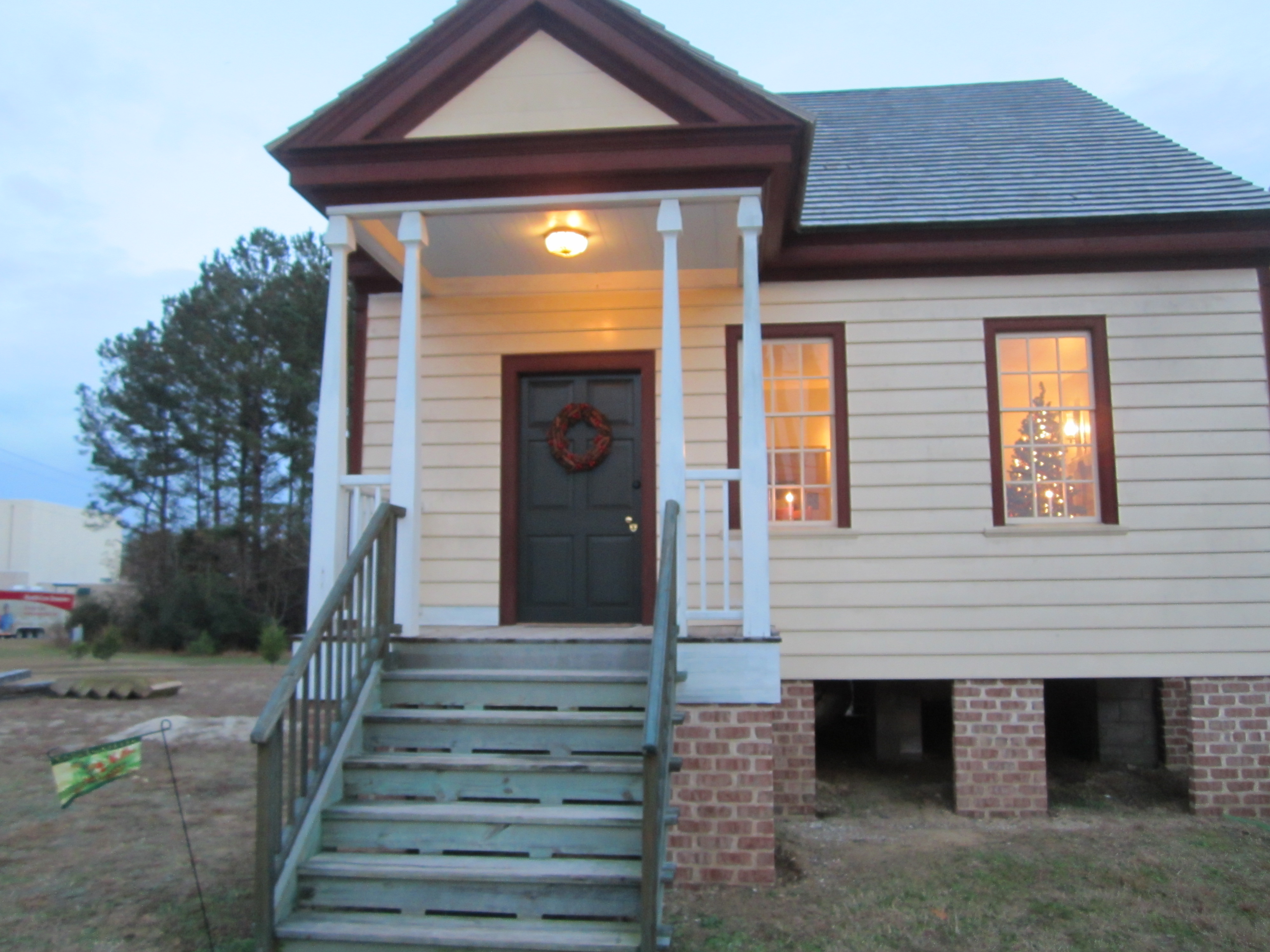 The east facade showing the rear addition added around 1840 which is currently a classroom. 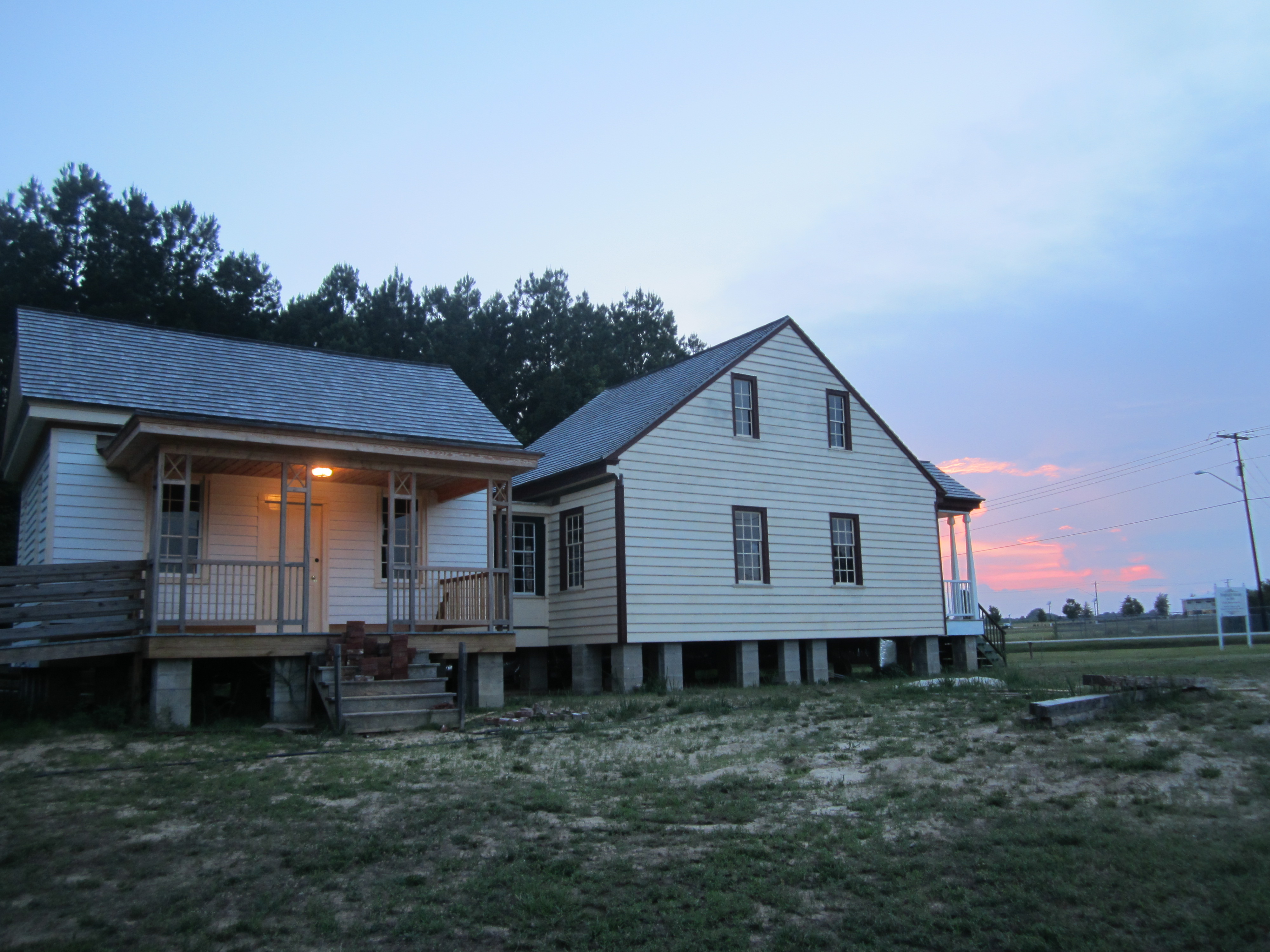 The sign out front on the highway identifies the house and the preservation program that is restoring the structure. 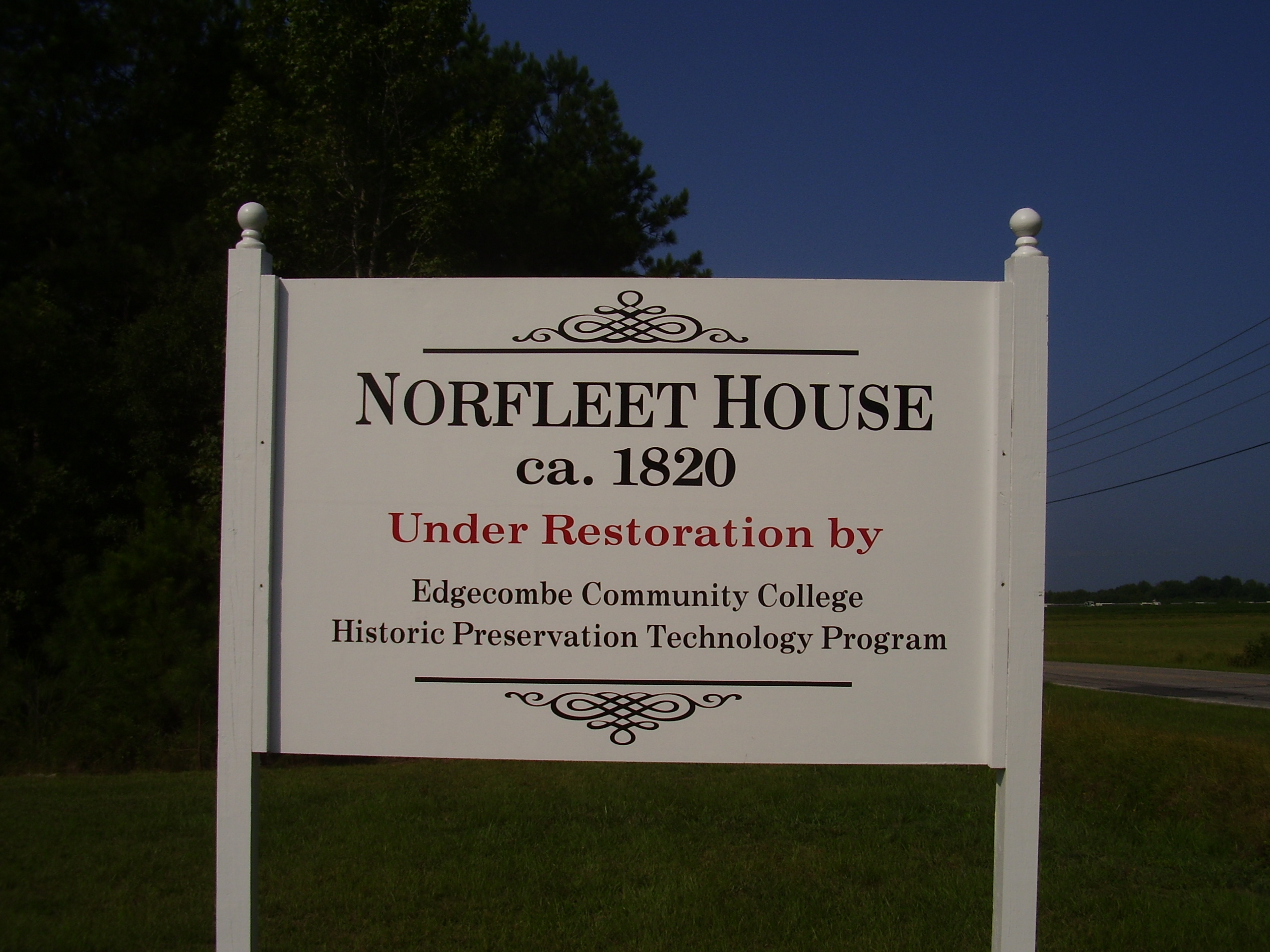 The original parlor of the house has been restored with museum era furnishings. The mantle, the windows and the wainscoting were all constructed by students to replace the missing items. 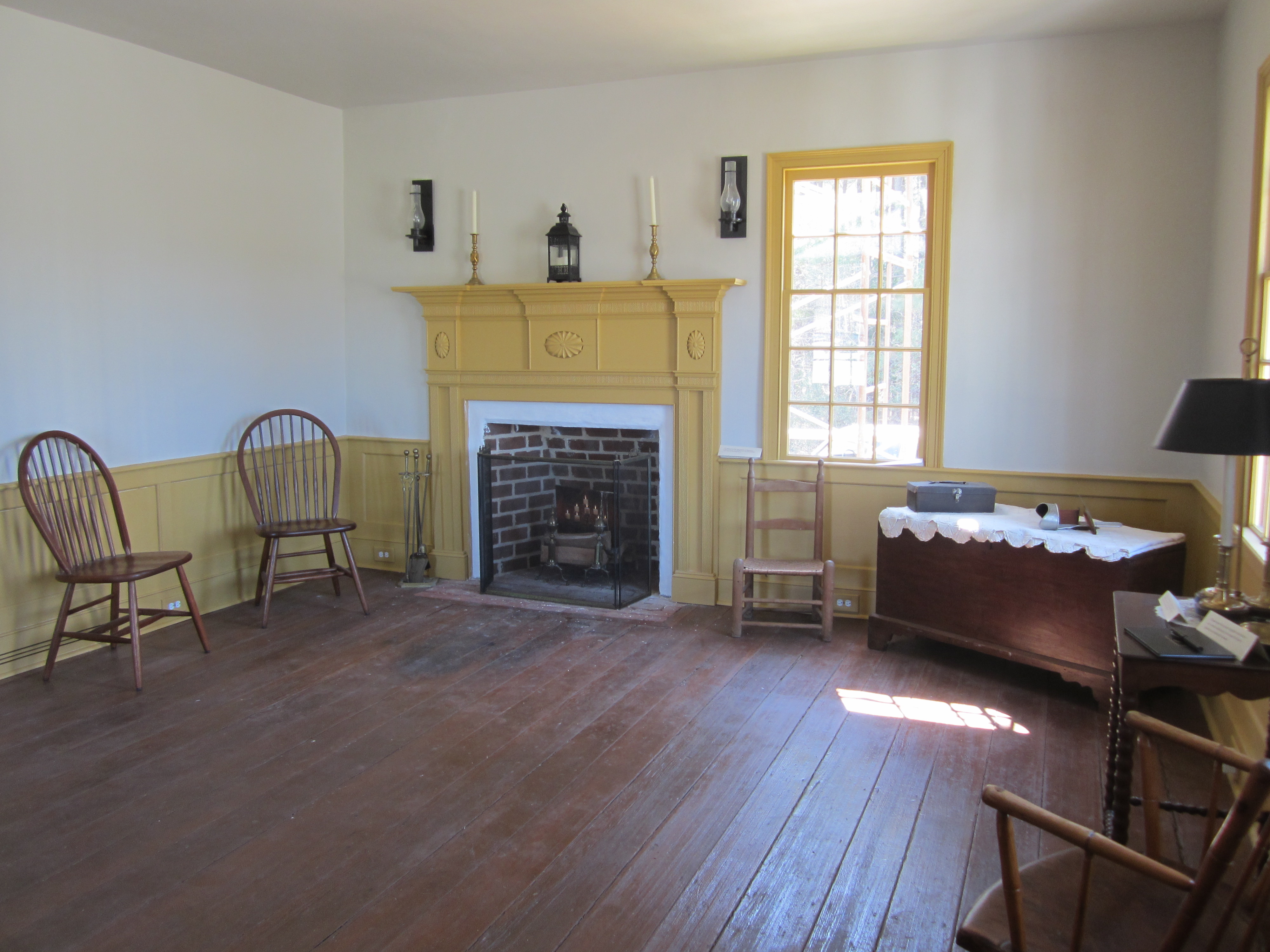 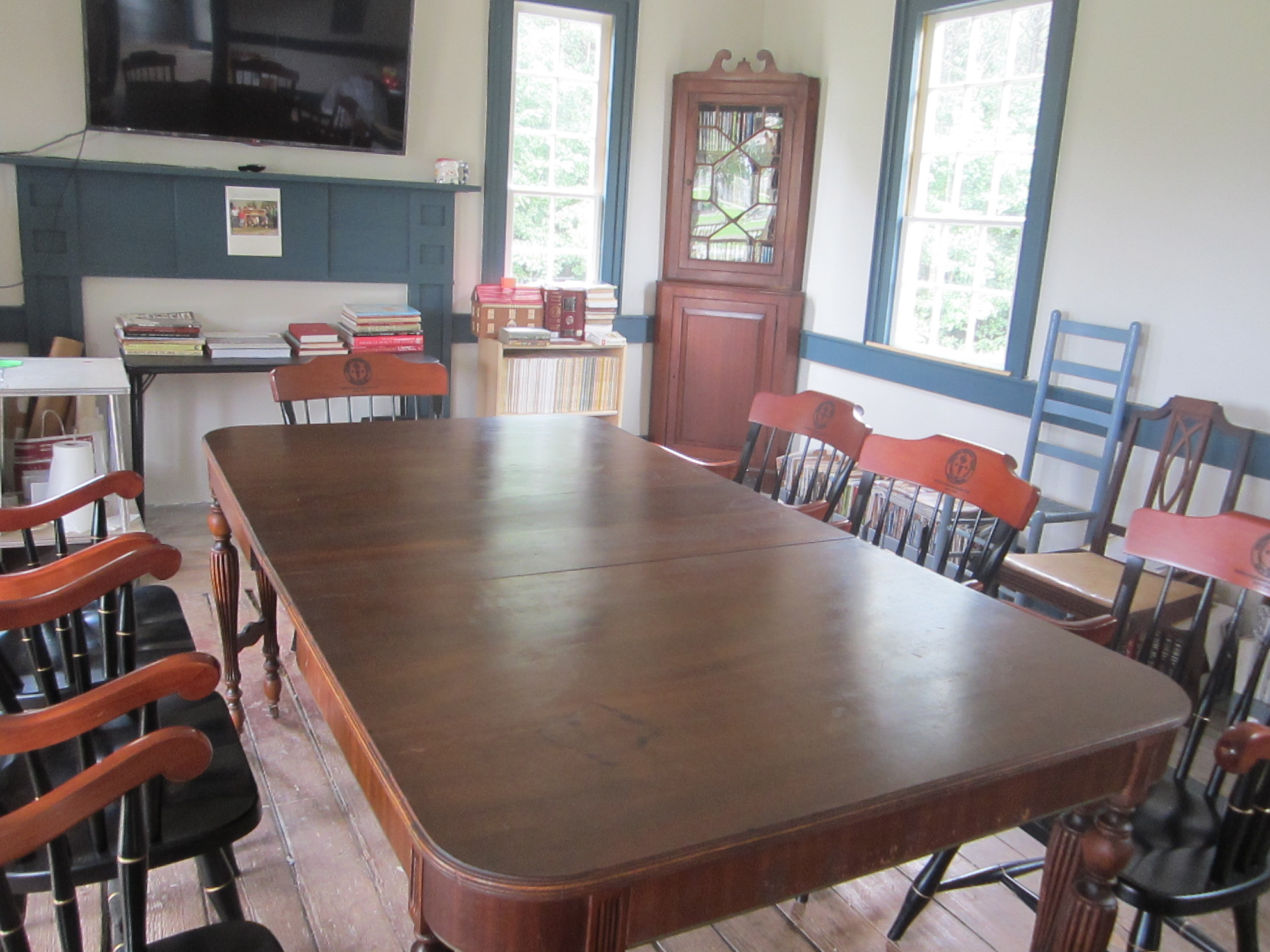 The Norfleet Library and archives has reference materials on area families, historic homes, cemeteries and related aspects of architectural history. It is open to the public. 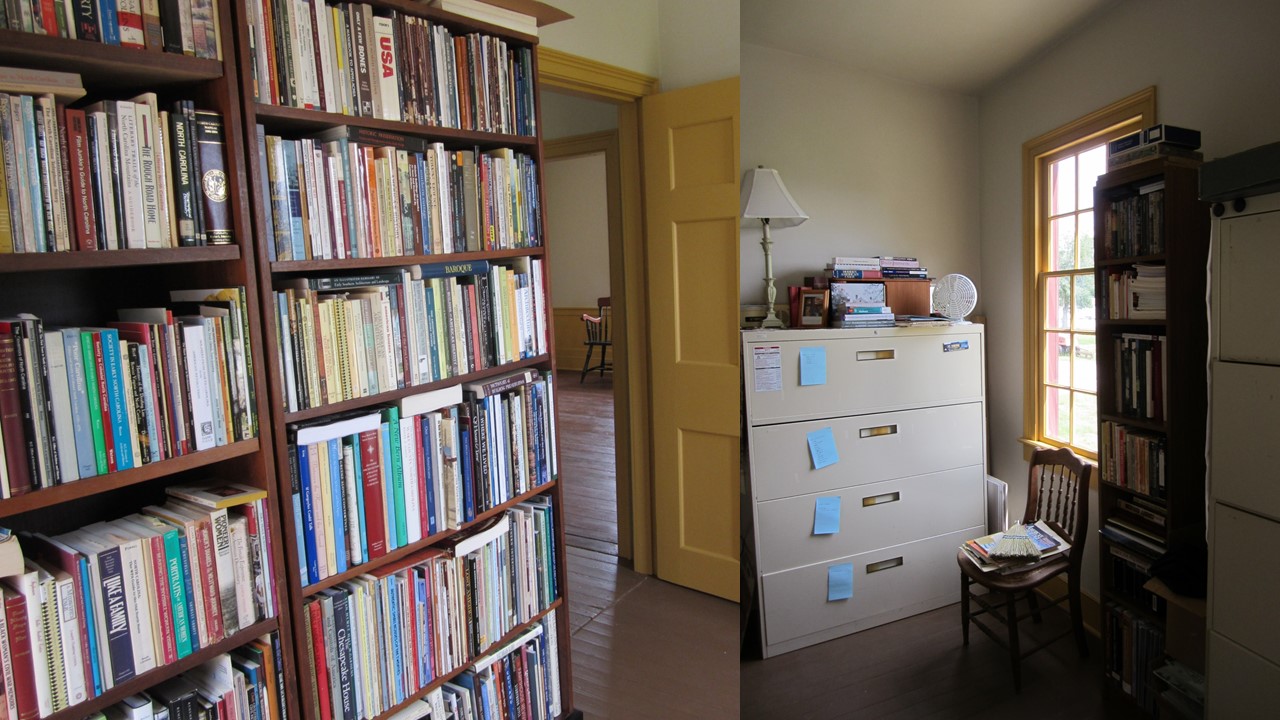 This is located about a quarter of a mile from the current location of the house and is on the original property of the Norfleets. Isaac, Christiana, and 8 of the 10 children are buried in this cemetery. 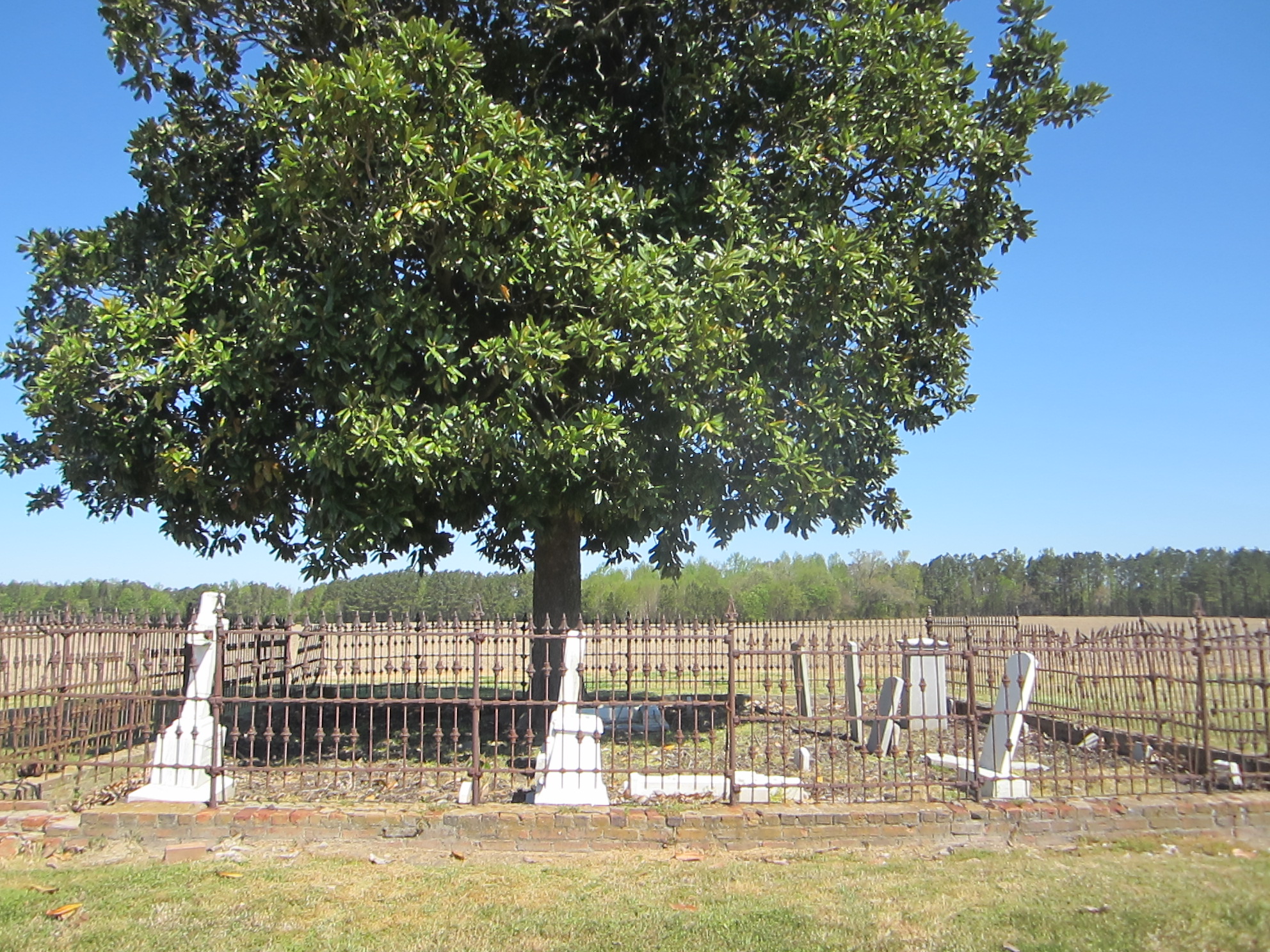 This is the earliest known photo of the Norfleet House, taken by Francis Benjamin Johnston in 1936. The photo is from the Library of Congress Carnegie Collection on Southern Architecture. 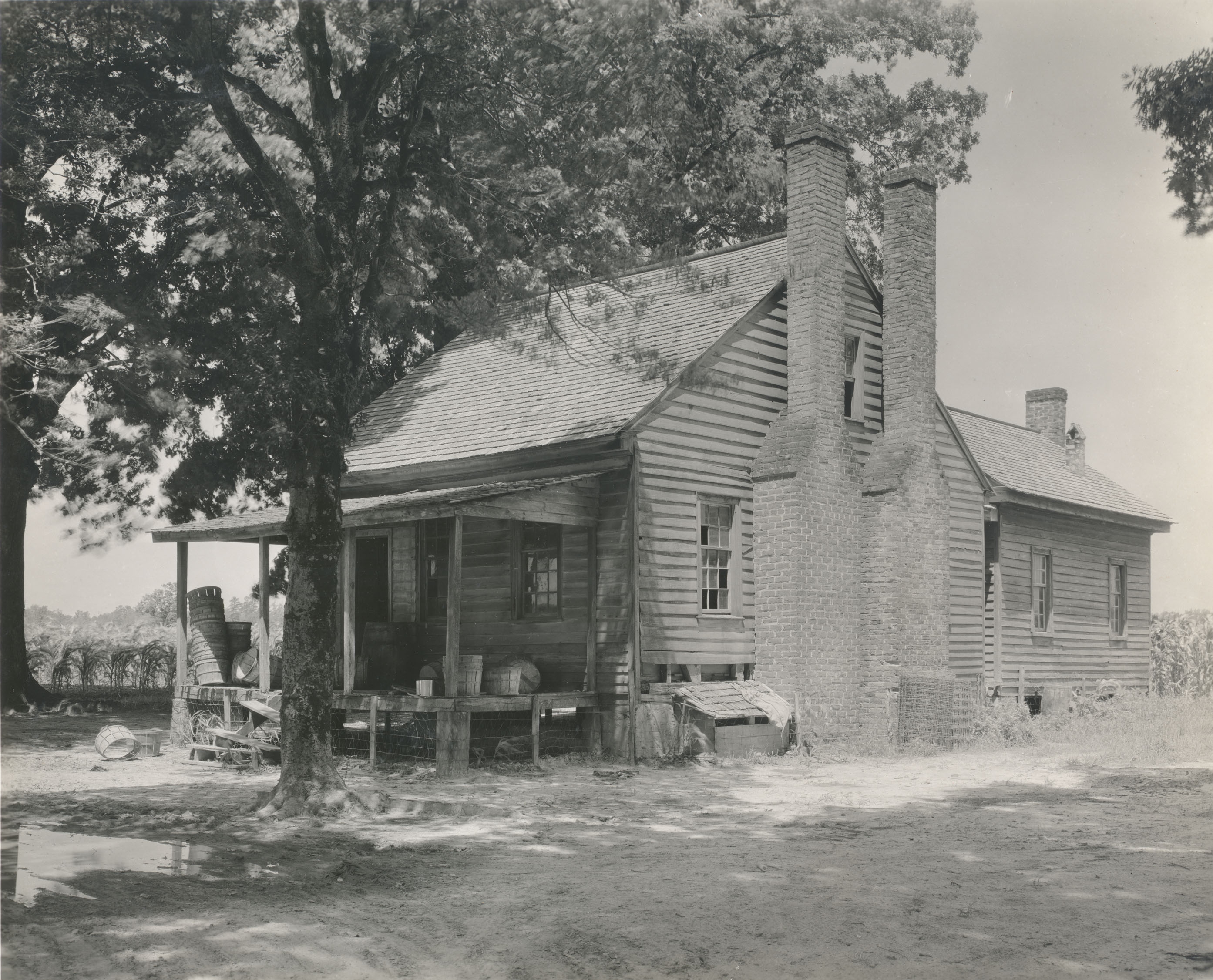 The House
The Norfleet House is believed to have been built around 1810 by Isaac Norfleet after his move to Edgecombe County. The house originally set on a farm with the family cemetery nearby. The original structure was timber framed and had three rooms downstairs and an open area upstairs. It originally had a wooden shingle roof and had two fire places on the north side of the house. The original heart pine floors remain in the front room and the upstairs. The front room has restored wainscoting, windows and a mantle. An addition was added around 1840 which possibly served as a dining room. The detached kitchen has not survived. An original chair rail was found in the dining room and was used to determine the paint color for that room.
The family owned the house until the early 20th century. Photographed in 1936 by Frances Benjamin Johnston, it was a tenant farm house at that time. Shortly after it was renovated and became the home of the superintendent of the local prison in 1939. That renovation included adding electricity, indoor plumbing and exterior paint to the structure.  After World War II, the property was sold and used again as a tenant house. In the late 1990s, plans for an industrial park caused the house to be moved across the county. The flood of 1999 damaged a part of the relocated house. In October 2009 the house was moved to the campus of Edgecombe Community College where it became the center of the Preservation program. So the house has been moved twice and has about 40 miles on it in its 200+ year history.
The Family
The Norfleet family was the first family to live in the house. Isaac Norfleet, who bought the land where the house was built, was born in 1783. He moved to Edgecombe County from Bertie County around 1810. He moved to Edgecombe with his second wife Christiana Ward. Isaac Norfleet was an active member in the community. He served as the clerk of court, was assistant marshal, and was an Edgecombe county census taker.
Isaac and Christiana had 10 children who at some point in time all lived together in the house. In addition to being a public servant, Isaac was also a farmer. The Norfleet's farm grew larger as the years passed eventually including almost 2,000 acres. By 1840, Isaac Norfleet had 32 slaves working his land. Isaac Norfleet died in 1844, leaving Christiana as head of household. In 1850, it was reported that the Norfleet farm produced a mass amount of crops including: wool, corn, peas, potatoes, hay, butter, and various livestock.
Christiana Norfleet died in 1853 and the estate was divided among the 10 children. There were three girls: Emily, Margaret, and Sarah; and seven boys: Robert, William, John, Joseph, Benjamin, James, and Thomas. Two of the three girls married, and only two of the seven boys married and had children. James died when he was 21, Joseph died at 30. William never married but became the county prosecutor and had in his will that property would be left to a Nancy Norfleet who was a former slave. John served as Clerk of Court and was elected Mayor of Tarboro in the 1870s. Benjamin operated the family farm and died in 1896. Many of these family members are buried in the Norfleet family cemetery which is located near the house.
The Archives
The Norfleet house also contains a library and archives room that is open to the public. Members of the community and others are encouraged to use this room for research or learning about the history of Edgecombe County and North Carolina. There are a number of resources that can be found in the library including but not limited to books on architecture, material culture, women's history, African American history, and cultural landscape. The archives include a wide variety of records including genealogy records, land records, southern culture files, and cemetery files. The archives also include helpful local history records including architectural archives on many of the historic houses in Tarboro, and all National Register properties along with a collection of files on Edgecombe county schools, churches, and businesses. The Norfleet House also has a selection of original newspaper issues from the Daily Southerner dating from the 1860s to the 1890s.

http://trees.ancestry.com/tree/68924427/family -source for the history of the family Perkins, Dorothy Neblett. Thomas Norfleet of 1666: Some of his Descendants and Allied Families. Vol. II. Neblett Press, Sante Fe, CA.

9-4 Mon-Friday and other times by appointment. Hours vary in the summer.