As the name indicates, the Missouri Headwaters State Park is where the Jefferson, Gallatin and Madison rivers converge here to form the starting point of the Missouri River. This location is also the Three Forks National Historical Landmark. In late July 1805, the Lewis and Clark Expedition park arrived here on their journey to the Pacific. Meriwether Lewis and William Clark named the rivers after President Thomas Jefferson, the Secretary of the Treasury Albert Gallatin, and the Secretary of State James Madison. The park is listed on the National Register of Historic Places. 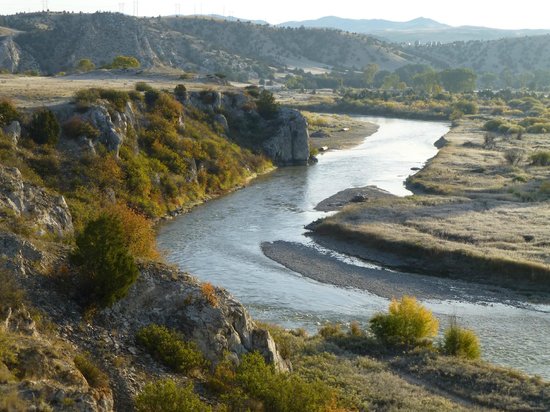 Another view of the area

By this time in the expedition, Lewis and Clark were searching for Shoshone tribes so they could trade for horses, which were needed to cross the Rocky Mountains. They did not encounter any Shoshone until after they reached Beaverhead Rock on August 8th. Sacajawea recognized it (she was captured as a child) and knew they were close to her people. The horses proved to crucial for the next phase of the journey.