The Christian Faith and Life Community

This was the address of the Christian Faith and Life Community's College House, though the building has since been replaced. The Christian Faith and Life Community (CFLC) was a religious organization affiliated with the University of Texas at Austin. As the first residential training center of lay Christians established in connection with campus activities in the country, the Austin Experiment became the archetype for lay education and campus ministry, both nationally and internationally. Founded in 1952 by Reverend Jack Lewis, the Community was part of the larger international theological existentialist movement, which sought to deal with the paradox of anxiety: the fact that humans carried both the chance and the burden of creating meaning in life. Though existentialism itself did not imply political activism, many members of the Community went on to be active in politics. This organization’s evolution paralleled the changing social and political concerns of the United States during a time characterized by unprecedented unrest.

A photo of the CFLC's College House from their brochure, "A Bold Experiment for the Mission of the Church." 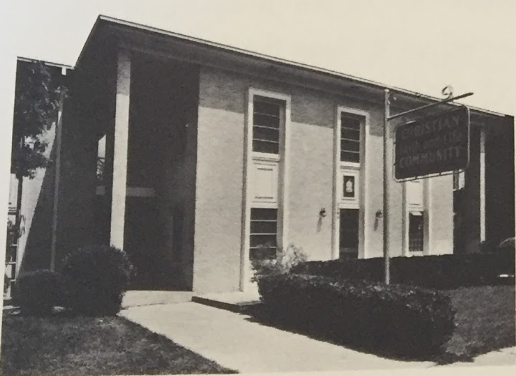 Viewing faith as “a matter of one’s day-to-day existence rather than a matter of theoretical or abstract possibilities,” Lewis established the Community as a research center. The Community itself was considered an experiment, as it it was ecumenical, residential, and included in depth theological study. The Christian Faith and Life Community’s program was designed to complement the undergraduate coursework at the University of Texas at Austin, and consisted of four major topics: “contemporary theology, Biblical studies, Church history, and ethics.” In its inaugural year as an organization, only men were admitted to the program, but it quickly expanded to include women and facilitate more members. The mounting interest in the program was not only local: in the ten years after the creation of the CFLC, 40-50 programs inspired in varying degrees by the Community were established at other universities and colleges in the United States.

A central aspect of the CFLC was engaging, educating, and enabling the layman to apply their theological beliefs to their lives. The goal was to “prepare laymen for the renewal of the church for her mission” in the postmodern world. Emphasizing the religious leadership of the laity, the Community’s theological study encouraged them to relate theology to society. During this time, society was surrounded by “an intensely technological world of automation,” which “eliminate[d] traditional other-worldly metaphysics.” The Community experimented with alternative lifestyles, theological study, and self-exploration to redefine the Church so it could equip its members with tools to navigate this new world. The CFLC’s publication was entitled Letter to Laymen and was sent to over 8,000 ‘laymen’ in 43 countries by 1962. The striking reach of the Community was equaled by the broadly diverse students it attracted, as the CFLC was known to house a large number of international students and was racially inclusive. In fact, the Women’s Branch of the Community was the first housing on University of Texas campus to racially integrate in 1954.

One of the most important people involved with the CFLC was Joseph Mathews, who was hired by Lewis in 1956. The Texas Observer described Mathews’ role within the organization as “that of the spectacular lecturer, the chief attraction to the students, the brilliant and creative thinker,” but is has also been said that he “alienated and hurt at least some of the students he taught,” due to his belief that “breaking people down might lead to breakthrough.”  He encouraged transparency in The Community, which enabled members to expose themselves to others, creating a more authentic environment. Under Mathews’ direction, the CFLC curriculum was heavily influenced by ‘theological existentialists’ such as Paul Tillich, Rudolf Bultmann, and Dietrich Bonhoeffer. A significant element of this approach to religion included “[wrenching] Christianity out of its ancient trappings and [recasting] it in modern language, symbols, myths, and hopes,” which resulted in something “which is to traditional religion what a modern English version of Shakespeare might be to the traditional production.” The cornerstone of his ideology is that religion must change with time, and the Austin Experiment aimed to morph Christianity into twentieth century symbols to better accommodate daily life.

Mathews’ modernized version of Christianity greatly appealed to college students, but it also caused a significant amount of controversy. A 1962 article from The Christian Scholar described this controversy, stating that, “some observers have even used the unfortunate term ‘brainwashing’ to caricature the passionate acceptance of his existentialist ideological stance by staff and resident student members of the Community.” These existentialist ideologies did have a profound impact upon those that participated in the CFLC program, which some historians argue pushed certain graduates toward emerging liberal politics. This is supported by descriptions of the Community as “the liberated spot on the silent campus,” and the fact that many of the program’s graduates went on to be heavily involved in political activism. Some of these graduates include Dick Simpson, Casey Hayden, Anthony Henry, Jim Neyland, Vivien Franklin, and Brad Blanton.