This statue recognizes the founding of Eeyore's Birthday Party, the annual free festival held on the last Saturday in April. Though a similarly-themed picnic was held the year before, the first official party was held in 1964 and planned by english graduate students Lloyd Birdwell and Jean Craver, as well as English professor James Ayres. The party started off as a fraternity- and sorority-sponsored event, but later fell into the hands of The Friends of the Forest, a group from the University YMCA once the size of the party became too large for Prof. James Ayres to handle. The celebration features live music, Maypoles, drum circles, refreshments, red balloons (which are Eeyore's favorite), and Eeyore himself. The festival is advertised for all ages and includes family-friendly events such as egg tosses and relay races. All proceeds from the festival go to nonprofits to benefit the Austin community. This festival is a carry-over of the free spirits from the 1960s and is seen as a an integral part of the "Keep Austin Weird" culture.

Eastwoods Park as seen today. Eeyore's Birthday Party was held here every year until attendance outgrew the park. It has sinced moved to Pease Park, where there is enough room to accommodate the 10,000+ free spirits who attend every year. 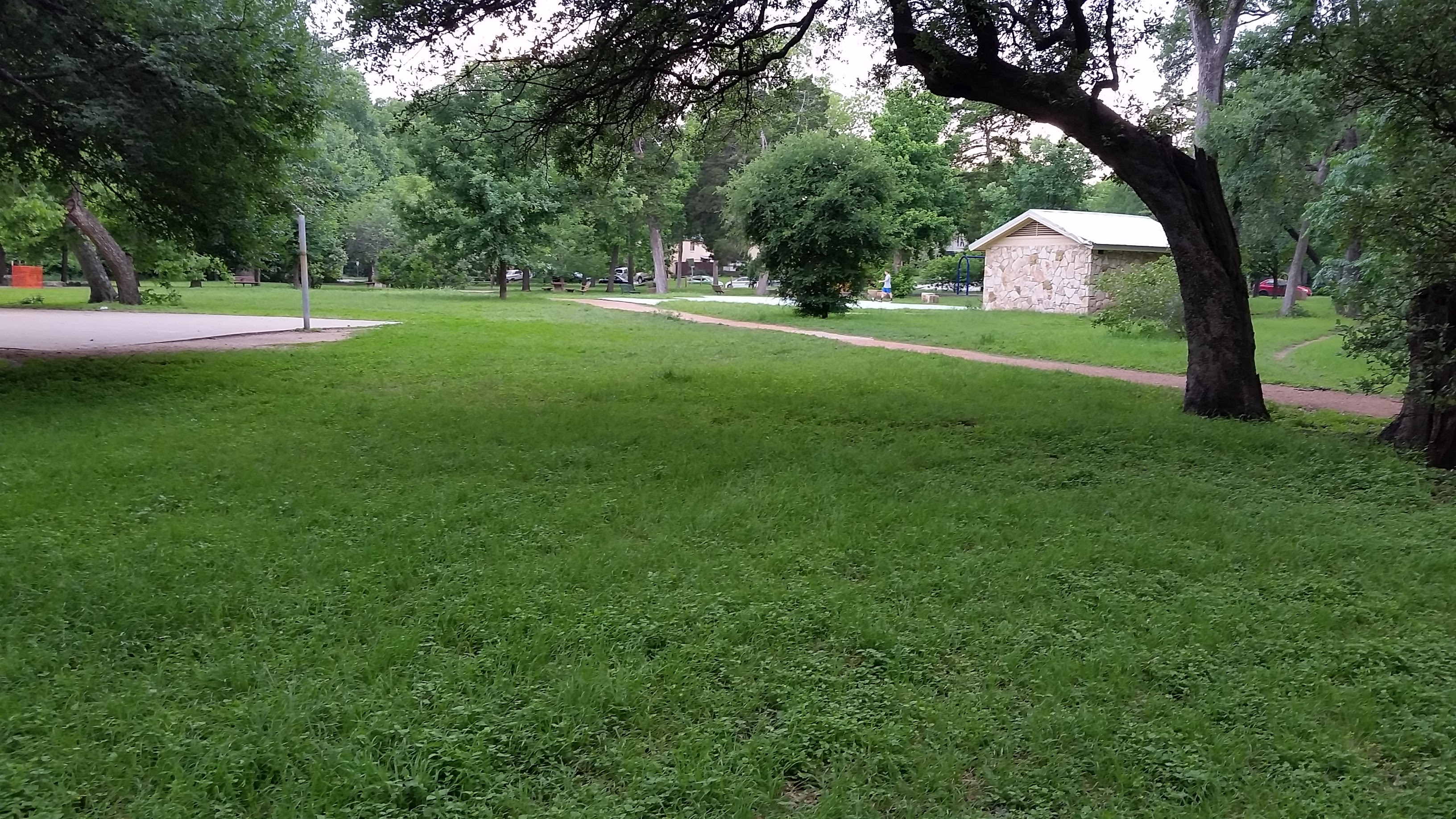 The Statue of Eeyore. Although the plaque commemorates the founding in 1964, Eeyore's Birthday was celebrated at the end of the year English Department picnic in 1963. 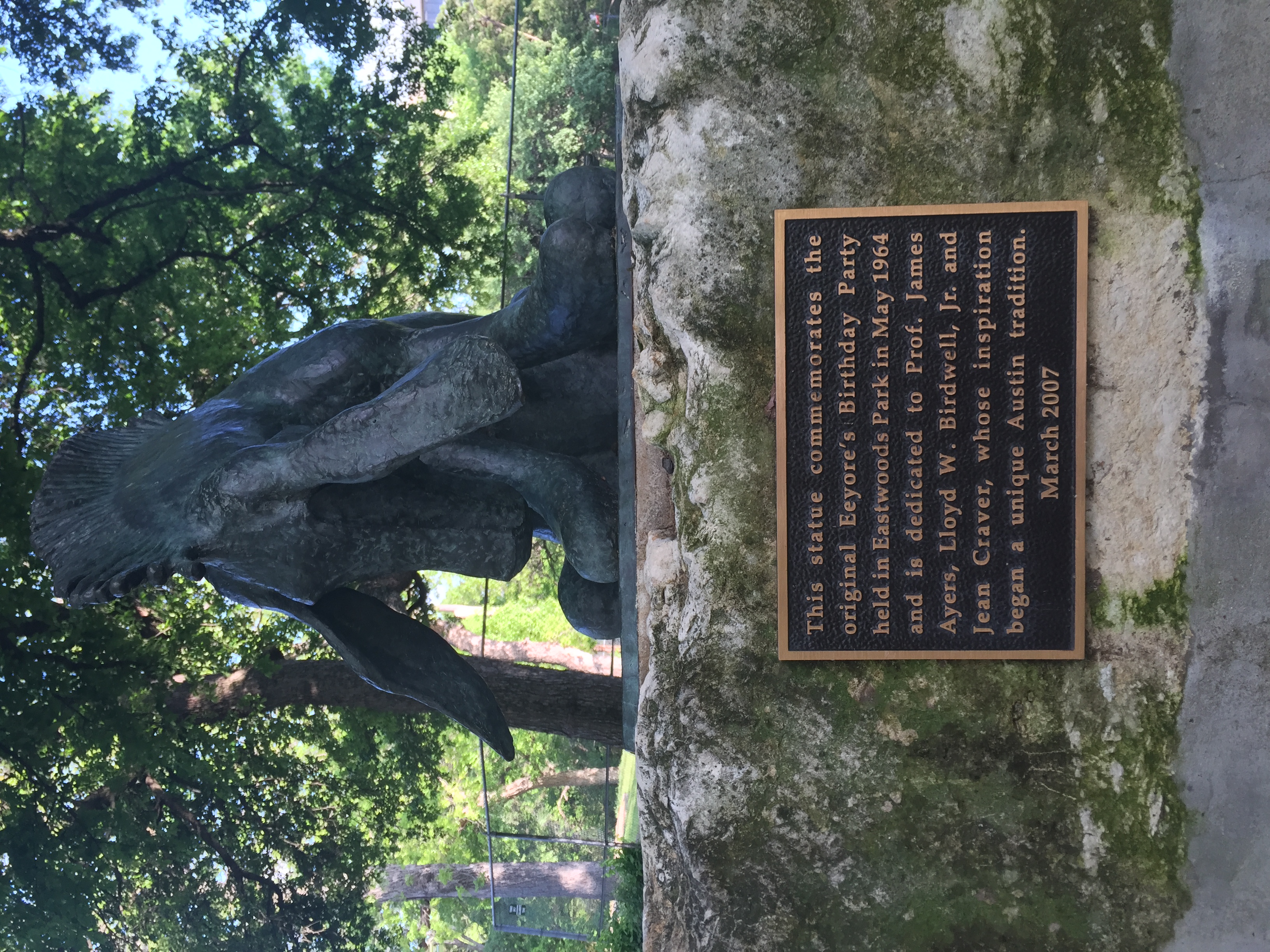 In one particular story from the Winnie-the-Pooh’s 1000-acre woods, Eeyore is found lamenting because his birthday has been forgotten! To cheer him up, Pooh and Piglet get a jar of honey and a red balloon to give as gifts. However, in the course of the day, Pooh eats the honey and Piglet pops Eeyore’s red balloon. As they shamefully present these ruined gifts to Eeyore he exclaims that he can put his balloon, at least what’s left of it, into his empty jar! Thus, Eeyore’s birthday is saved by the optimism of the chronically depressed donkey.

This children’s story is the inspiration for Eeyore’s Birthday Party, a festival annually in Austin, on the last Saturday in April. The celebration is held in Pease Park and is meant to be a celebration for all types of people, attended annually by students, children, and hippies. Intermingling is encouraged and there are activities for all. The festival started in 1963, when Eeyore’s Birthday was the theme of the annual end of the year picnic for the English Department at the University of Texas. The organizing responsibilities for this picnic fell onto the shoulders of Master’s student Lloyd Birdwell, who likely got the idea from a sorority that had been having a lot of Winnie the Pooh events at the time. This first picnic included colorful costumes, a trash can of lemonade, beer, honey sandwiches, and a live flower-draped donkey” . The department picnic was a resounding success, and from this once humble department picnic, grew one of the most iconic festivals in Austin.

The next year, Lloyd Birdwell teamed up with Dr. James Ayres and fellow student Jean Craver to make the event University-wide. Ayres would continue to plan the event well into the 1970s. Invitations for the first official celebration of Eeyore’s birthday sent to University administrators, professors, and students as well as a few select citizens, read:

Lloyd Birdwell, … [et al. ] … Invite you to EEYORE’S birthday party on May the 8th (a very hummy sort of a day) at 4 in the afternoon in our favorite part of the forest. That being, Eastwoods playground, Park Place and Harris Blvd.

The invitation also featured a map and indicated that the celebration would include free beverages, Eeyore’s birthday cake, music, a Maypole, and Eeyore himself. Invitees were encouraged to wear costumes and bring red balloons, as they are Eeyore’s favorite.

The party’s small start quickly expanded. The attendance grew from fifty people at the first picnic in 1963, to several hundred in the mid-1960s, all the way to 14,000 by 1978. By then, Eeyore’s birthday featured a couple hundred kegs and asked for $1 donations from all attendees. In 1967, 3,000 invitations were sent out, including one to the president himself, though he never attended. After the party grew in popularity in the 1960s, Eastwood’s Park’s mere nine acres were not nearly large enough to hold the party. The party needed something more of the size of Winnie the Pooh’s 100-acre woods, which is when the party changed locations to Pease Park. At this point Ayres could no longer host the party, so a  group from the University YMCA, The Friends of the Forest, took over the party planning after it relocated.
Although the modern festival has a reputation as a liberal event, this was not always the case. For the first ten years of this festival, Eeyore’s birthday was invitation-only, run by the fraternities and sororities, and attended by members of the elite, including Lady Bird Johnson. It was not until 1973, for their tenth annual festival, that the invitation for Eeyore’s birthday was extended to the entire state of Texas. In an effort to contrast Eeyore’s Birthday, the UT Austin chapter of SDS created a counterculture celebration known as “Gentle Thursday”. “Gentle Thursday” preached a message of inclusion, inviting everyone, and had no scheduled events whatsoever in an attempt to appeal to the authenticity of free-form fun. This event was not condoned by the University because, as stated by a representative, “the events were too ambiguous and that the university could not condone kissing, balloons, mellow yellow[banana peels that were smoked for a mild hallucinogenic effect], and en masse love”. However, the early elitist, exclusive reputation of Eeyore’s Birthday had been uprooted by the late 1970s after the invitation was extended statewide. In 1979, after the celebration was cancelled due to rising costs, one frequent attendee advocated for an impromptu celebration, stating “Organization is the very antithesis of Eeyore’s. It can just happen”.

If you choose to attend the festival today, you can expect to find enough to fill an afternoon. There are vendors selling food and beer where all of the proceeds go to nonprofits. Throughout the park there is a large drum circle of several hundred people all beating drums together. In another section of the park there is a football game played on unicycles. Children can also play an egg toss and participate in the egg relay race. A maypole is present along with a real live donkey for children. People wear extravagant costumes and in the wooded areas of the park there is a lot of smoking. The event is a carryover of the free spirits seen throughout the sixties. The party is still unique as it blends different groups of people together that would not normally interact.

Even though it has outgrown Eastwoods and moved to Pease Park, Eeyore’s birthday continues to be an integral part of the “Keep Austin Weird” culture. Despite heavy criticism from the neighboring communities, every year invitations to Eeyore’s birthday party are sent statewide, promising live music, refreshments, Maypoles, and of course, red balloons.