The Lynching of Sam Hose

Sam Hose, also sometimes referred to as Sam Holt or Samuel Wilkes, was a victim of a lynch mob in 1899 following allegations of the murder of Alfred Cranford and the sexual assault of Mattie Cranford. 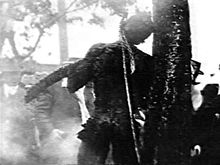 The spring of 1899 proved to be a bloody one in the Palmetto and Newnan area of Georgia. On April 12th of that year, just before the related lynching of Baptist preacher Lige Strickland, Hose allegedly approached Alfred Cranford, his employer, about a wage increase. An argument ensued and Cranford pulled out a gun with the intention to kill Hose. As an act of self defense, Hose threw an axe, killing his employer. He then fled to avoid the social and legal consequences of his actions. Eventually, Hose was caught and was forced to return to the Coweta County area by train.

The train was apprehended by an angry mob with the intent to kill Hose. Local authorities requested that the mob allow for law enforcement to properly handle the issue, but the mob was relentless and rather proceeded to torture Hose by forcibly removing certain body parts before hanging his body on a stake, dousing him in oil, and burning him alive. Hose pleaded for mercy, only to be ignored by the 2,000 person mob. The moment that Hose died, members of the mob began to dismember and further destroy what little was left of Hose's body and kept or even sold pieces as souvenirs of the occasion. On that Sunday, April 23rd, newspapers published the news of Hose's lynching, and tourists came via special train service from other towns in Georgia to view Hose's burned and mutilated remains. Some of the remains traveled away from Newnan and Palmetto, with W.E.B. DuBois reporting seeing Hose's knuckles displayed in an Atlanta butchershop window.Later investigations agree that Hose was acting out of self-defense, and not maliciously, therefore making the lynching not justified. Additionally, investigators agree that the rape charges were fabricated after Cranford's death and Hose's fleeing in an effort to place further shame on Hose's name and attempt to justify the lynching that was bound to occur. This incident is quite brutal but is not unlike other lynchings which occurred throughout the American Southeast.

The exact site of Sam Hose's lynching is unknown and there are no formal markers alerting passersby of the atrocities that occurred in the small town of Newnan, Georgia. His story is chronicled in The Souls of Black Folk by W.E.B. DuBois as well as in writings by other authors.