Completed in 1970, Riverfront Stadium served as the home of the Cincinnati Reds from 1970 until the opening of Great American Ball Park in 2002. With the proliferation of automobile use in conjunction with shifting demographics and a rising crime rate surrounding the site of the Reds former home Crosley Field, the Reds' ownership made the decision to design a new ballpark and close the existing stadium. Team owner Bill Dewitt entertained an offer to move the team to San Diego in the 1960s, a move that prompted local investors to make a bid for the team. The Reds were the first professional team in baseball history, so the effort to ensure that the Reds stayed in Cincinnati received public support. These investors made sure to utilize this support to help secure funding for the construction of a new stadium. Riverfront Stadium was built between 1968 and 1970 and opened with a seating capacity of 52,952 and a parking garage that held 2,500 cars.

A historic photo of the stadium under construction. 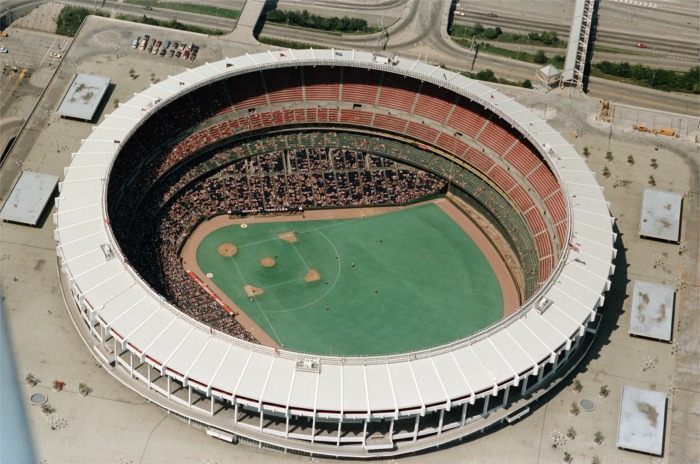 Cinergy Field is demolished with the new Great American Ballpark in the background. 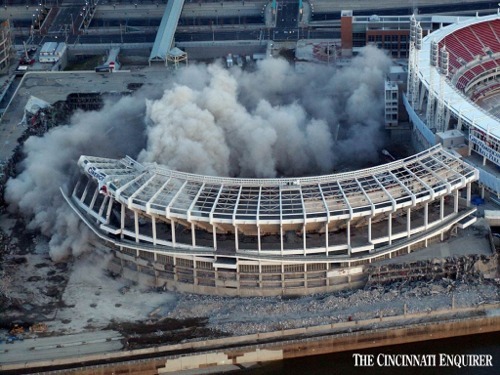 Riverfront Stadium was built to accommodate both baseball and football. The lower level box seats could be moved away on wheels, allowing the capacity for 59,754 to watch the Bengals before the creation of Paul Brown Stadium in the mid-1990s. The scoreboard was in centerfield. The stadium remained the same up until 1996 when the stadium's naming rights were sold to the Cinergy Corporation. Two years later, the team and city announced plans to create a new baseball stadium so close to the location of Cinergy Field that 14,000 outfield seats had to be removed and the bullpens had to be relocated before construction of the new stadium could begin.

For the next two years, fans at Cinergy Field could look out over the center field wall and see the Ohio River and the new ballpark being constructed. The last game played at Cinergy Field was played on September 22, 2002, a 3-4 loss to the Philadelphia Phillies. At the end of the 2002 season, the stadium was demolished on December 29, 2002. The following season, the Cincinnati Reds moved to their current confines at Great American Ball Park adjacent to the site of the former Cinergy Field.

Riverfront Park/Cinergy Field was home to many great moments in sports. Among the most memorable moments was Pete Rose's record-breaking hit that surpassed the previous record of 4192 hits set by Ty Cobb. Henry Aaron tied Babe Ruth's record at this stadium when he hit his 714th homerun.

This walking tour includes historic buildings, churches, markers, monuments, and museums, as well as significant historic events that occurred in downtown Cincinnati. From historical markers to diverse Cincy residents from Stephen Foster to Elizabeth Blackwell, along with sites related to the early history of the city, slavery and abolition, the Civil War, and historic businesses, this tour winds through the downtown area and concludes at the Freedom Center. Enjoy!