The Forney Transportation Museum is a transport museum located in Denver, Colorado. Names after its founder, J.D. Forney, the museum began as a private collection in 1921. It became a museum in 1961, and a non-profit organization in 1964.

Exterior of Forney Museum of Transportation, located in Denver, Colorado. 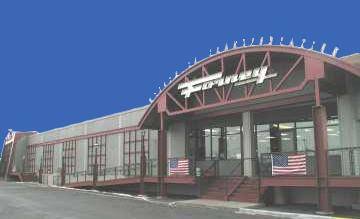 The Forney Museum of Transportation is a non-profit organization which exists to collect, preserve, and exhibit items of artistic, historical and technological interest relating to transportation for the purposes of education and personal enrichment.

J.D. Forney was also the founder of Forney Industries. He began a door-to-door business in 1932 selling the Forney Instant Heat Soldering Iron. He later invented a welder that was intended to be used outside the industrial setting.

The Forney Museum of Transportation has a collection of over 600 artifacts relating to this history of transportation. It began as a private collection, when Forney, became interested in antique and classic cars after his wife and children gave him a 1921 Kissel Tourister in 1955. Mr. Forney started taking in old cars and carriages as trades for the sales from Forney Industries. The collection has since grown to include buggies, motorcycles, steam locomotives, aircraft, carriages, rail equipment, fire apparatus, public transportation, sleighs, bicycles, toys and diecast models, vintage apparel and much more.

When his collection outgrew his space, he joined forces with Dr. James Arneill, a local physician. The two created the nonprofit and created the museum. The museum moved to its present location, a renovated food distribution warehouse, in 2000. The oldest piece in the facility is an all-wood bicycle that dates back to 1817.