History and the arts mingle in the Memorial Opera House of Valparaiso, Indiana. It was originally built as a meeting house for the Grand Army of the Republic that was subsequently used as an opera house. This Romanesque/Queen Anne marvel went on to amuse and inspire the people of the 19th century, and it remains to this day as a source of entertainment and culture. Musicals and concerts are still shown on its stage, and visitors can go and enjoy a theatrical show while they explore the historic opera house. 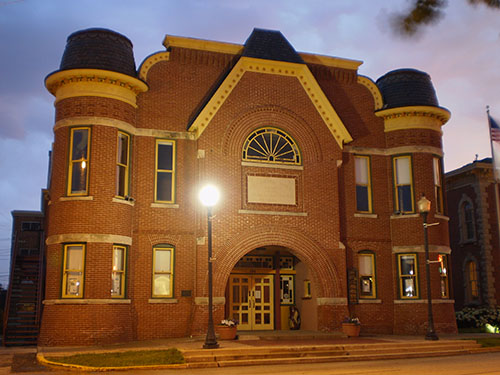 The opera house was built in 1892 and was designed by Charles F. Lembke, an architect that live in Valparaiso.  The opera house was given its name because it was dedicated by the GRA as a memorial to soldier that were in the Civil War.  It was originally created to seat only one hundred people, but eventually grew to a three hundred and sixty-four seat theater.  Several famous people have appeared on the opera house's stage throughout the years.  Some well-known people that have been to the Memorial Opera House were John Phillip Sousa, Beulah Bondi, Theodore Roosevelt, and the Marx Brothers.  It was abandoned during WWII due to years of decline brought on by the popularity of movie houses, but was bought and renovated in 1955 by the Community Theatre Guild.

The Memorial Opera House company nows run the opera house.  Through it, several different musicals, cabarets, and concerts are performed on the stage.  There is also a children's theater program.  The opera house is now on the National Register of Historic Places and is a historical and artistic fixture of the community.  With the work of the opera house's company and the many people that help it, the arts are brought to life, which, in turn, brings the past into the present day.

"Our Past." Memorial Opera House. Accessed May 25, 2016. http://www.memorialoperahouse.com/about-us