Built in 1855, the Desoto House Hotel is the oldest operating hotel in Illinois. It is a functional reminder of Galena's gilded 19th century past as well as a hotel with modern conveniences. IT has seen many different visitors, including some famous ones, throughout its one hundred and sixty year old history. It is a part of the Galena Historical District, which is one of the many neighborhoods that is on the National Register of Historic Places. 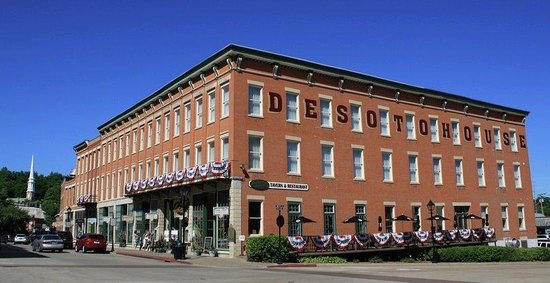 The hotel was created by a group of Galena's wealthy entrepreneurs who saw the commerical success of the Mississippi River city and the coming of the railroad in the town as a grand economic opportunity. It was named for Spanish explorer Hernado DeSoto, "discoverer" of the Mississippi River, because of its adjacency to the famous river.  A luxury hotel for its time, the building contained over two hundred guest rooms, a large dining hall, gentlemen's and ladies' parlors, a bowling alley, and working gas lamps.  Historic visitors to the hotel during its heyday were Abraham Lincoln, Stephen Douglas, Tom Thumb, and Ulysses S. Grant.  Unfortunately, the hotel began to see hard times at the dawn of the 1860s.  There was a fire in 1859, which destroyed several rooms, and in 1869 a steam boiler in the basement exploded.  The hotel was bought and renovated in 1871 by W.H. Blewett, and was eventually restored in the 1980s to its Victorian era roots.

The Desoto House Hotel is still a working hotel.  It has 55 guest rooms, two restaurants, a pub, and a ballroom.  Weddings and receptions are often hosted at the hotel, and special events, such as a dinner with actors portraying Abraham and Mary Todd Lincoln, are held throughout the year.  The hotel acts as a base for many visitors looking to explore the historic town of Galena.