The Hegeler Carus Mansion is a Victorian beauty set in the small Midwestern town of Lasalle. It was built for Edward Hegeler and his family, who ran their multi-business empire from within the mansion's walls. Later, the grand, Second Empire style building served as a luxurious home for the Carus family, as well as a headquarters for their publishing company, which was only one of the businesses that they ran. Today, the home is a museum dedicated to the architectural brilliance of the mansion, as well as the historical legacy of the family that used to inhabit it. 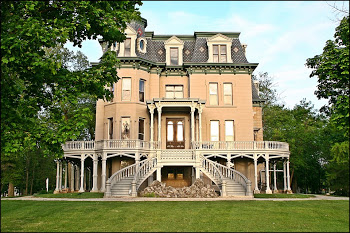 The mansion was built in 1876 for the family of Edward Hegeler, a wealthy zinc manufacturer.  Hegeler had first come to Illinois from Germany over two decades before and, along with his business partner and fellow German immigrant, Frederick Matthiessen, he became wealthy by producing zinc for the north during the Civil War.  Hegeler went on to pattern a zinc smelter whose design was used by zinc manufacturer's all over the world, which only helped to increase his fortune.  So, in 1874, he had William W. Boyington, a famous architect from Chicago, draw up the plans for the mansion he and his family would live.  There, he and his wife, Camilla, raised their eight children.  Their oldest child, a daughter named Mary, followed in her father's footsteps and learned how to produce zinc.  She became the first woman to graduate with a degree in engineering from the University of Michigan and served off and on as president of her father's zinc company from 1903 till 1936.
In 1887, Edward Hegler started Open Court Publishing, a publishing company dedicated to providing the public with excellent literature on the topics of philosophy, science, and religion, from the ground floor of his mansion.  He then hired Dr. Paul Carus, a scholar and writer from Germany, to be the publishing company's managing editor.  Paul and Mary fell in love and were married a year later.  Paul continued to run the publishing company from the mansion while Mary ran the zinc business, until Paul's death in 1919, after which Mary ran both companies.  The zinc manufacturing company died a few decades after Mary's death, and the publishing company left the Hegeler Carus Mansion, but the Hegeler and Carus families' businesses live on in other forms.  Edward Carus, a son of Paul and Mary, founded Carus Chemical Company, which manufactures potassium permanganate, in 1915, and the company is still run by the Carus family.  Open Court Publishing turned into the Carus Publishing Company, which publishes fourteen children's magazines, including the famous Cricket magazine.
The mansion is now a museum that guests can visit year round.  Visitors can tour the main rooms of the mansion, which have been restored to a late 19th-century look, and they can also buy something at the gift shop.  Concerts and lectures are held on the mansion grounds, well as within the home, and there are events throughout the year, such as Moonlight Tours in October and Victorian era Christmas decorations in December.