The Battleship Oregon Memorial was constructed in 1956 to honor the USS Oregon, known as the "Bulldog of the Navy." The memorial was constructed from salvaged pieces of the ship that were collected before the vessel was sold for scrap earlier that year in Japan. A time capsule was placed beneath the memorial on July 4, 1976 and is not set to be opened until July 5, 2076. 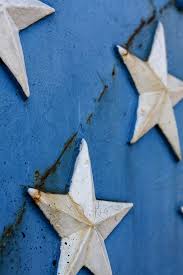 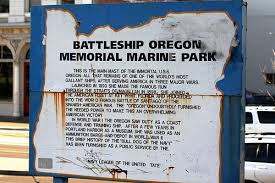 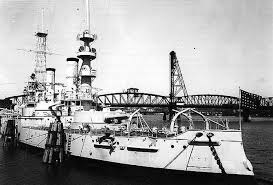 "US Cruisers, 1883-1904: The Birth of the Steel Navy" by Lawrence Burr-- Please see the link below for more information 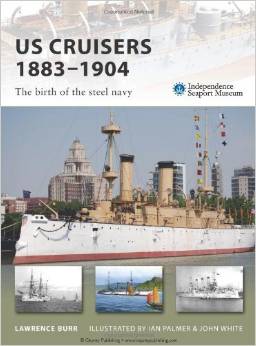 "The Battleship Oregon: The Bull Dog of the Navy" by Mary Walker Tichenor-- Please see the link below for more information

The USS Oregon was a pre-dreadnought, Indiana-class battleship that was commissioned by the U.S. Navy on July 15, 1896. Construction of the vessel was completed by Union Iron Works of San Diego, California. The ship took nearly three years to construct and was completed by October 26, 1893. However, it was not delivered to the U.S. Navy until June 26, 1896.

The USS Oregon is most well-known for its service in the Spanish American War. The ship played a critical role in the Battle of Santiago de Cuba when it and the U.S. cruiser Brooklyn forced the Spanish cruiser Cristóbal Colón to surrender. The two ships were the only vessels quick enough to overtake the Spanish ship. It was during this time that the USS Oregon received the nickname the "Bulldog of the Navy."

It also was used during World War I. In 1924 it was loaned to the State of Oregon and used as a museum. It was sold for scrap and then reacquired and used as an ammunition barge briefly before finally being broken up and sold for scrap. Two masts are all that remains and serves as a memorial to recognize those who fought and died in the Spanish-American War.