The Hillforest Mansion is a beautiful three-story mansion situated in Southern Indiana near the banks of the meandering Ohio River. The house was built in 1855 for Thomas Gaff, the wealthy co-founder of a distillery. The Hillforest Mansion now serves as a museum where the Victorian era comes to life inside this beautiful structure. Tours are given by guides in period dress, where visitors can see restored furnishings and decor. The house is a National Historic Landmark and is also on the National Register of Historic Places. 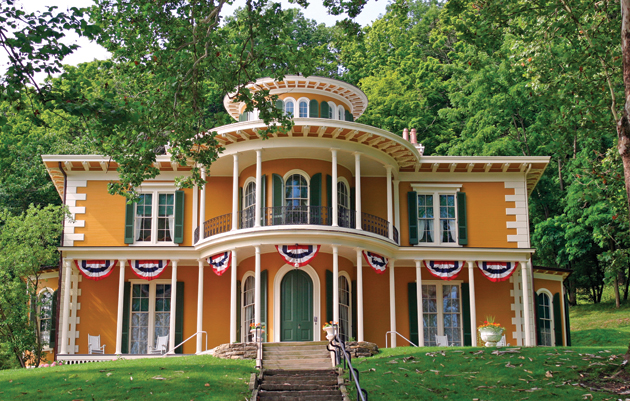 Thomas Gaff first moved to Aurora, Indiana in 1843 after the Panic of 1837 had convinced him and his brothers, the other two founders of his distillery business, to move their business from their home in Philadelphia. So, the Gaffs came to Indiana and became just as successful there as they had been in Pennsylvania. In fact, their business expanded to include a jewelry store, silver mines, two Louisiana plantations, and a cereal mill. In 1853, Thomas hired Isaiah Rogers, an architect renowned nationwide for his luxury hotels, to design his house. What resulted was the Italian Renaissance style marvel that exists today. After the home was built, Thomas and his brothers continued to grow their many business ventures, which eventually led to them furnishing steamboats to the Union during the Civil War.

One of these steamboats, the Forest Queen, was the headquarters of General William Tecumseh Sherman during the Siege of Vicksburg. Thomas died in 1884, but his family lived in the house until 1926. The mansion changed hands throughout the next few decades, first to a furniture manufacturer and then as a clubhouse for the Veterans of the Foreign Wars. In 1956, a group of local history lovers, later known as the Hillforest Historical Foundation, purchased the house and turned it into a museum.

The mansion can be viewed today through guided tours conducted at various times between the months of April and December. Hillforest hosts many historically themed events throughout the year, including a one-hour afternoon teatime and Victorian Christmas decoration. There is also a gift shop at the museum that sells items having to do with Hillforest and Indiana history.