Completed in 1883, Denver's City Hall was located between Larimer and Lawrence streets until it was razed in around 1940. A small marker that includes the bell from the building's tower is all that is left of the former building, which became the center of an armed conflict between the governor and city officials in 1894. Like many other cities during the "Gilded Age," Denver's city government was under the influence of political machines that profited from lax enforcement of laws against operators of brothels and gambling houses and purveyors of narcotics. In 1889, con-man turned organized crime leader Jefferson Randolph "Soapy" Smith's influence in securing the election of mayor Wolf Londoner became so obvious that Londoner was forced to step down. Smith fled the city for a time but soon returned and regained his influence within city hall. In 1894, a new reform-minded governor challenged the city's political machine by attempting to replace some of the city's commissioners. City officials refused to accept the governor's authority and promised to fight, prompting the governor to deploy the state militia. For several days, residents of the city watched as the power struggle between the governor and the city nearly resulted in a war on the streets of Denver. 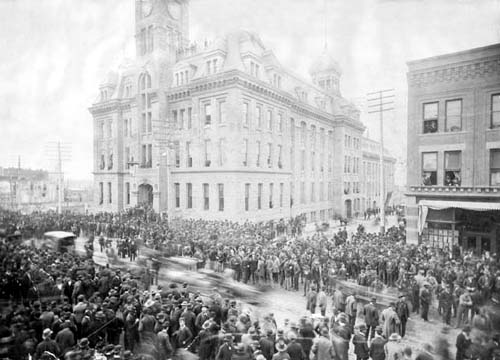 Colorado militia at 15th and Lawrence Street during their march to to Denver's City Hall, March 15, 1894. 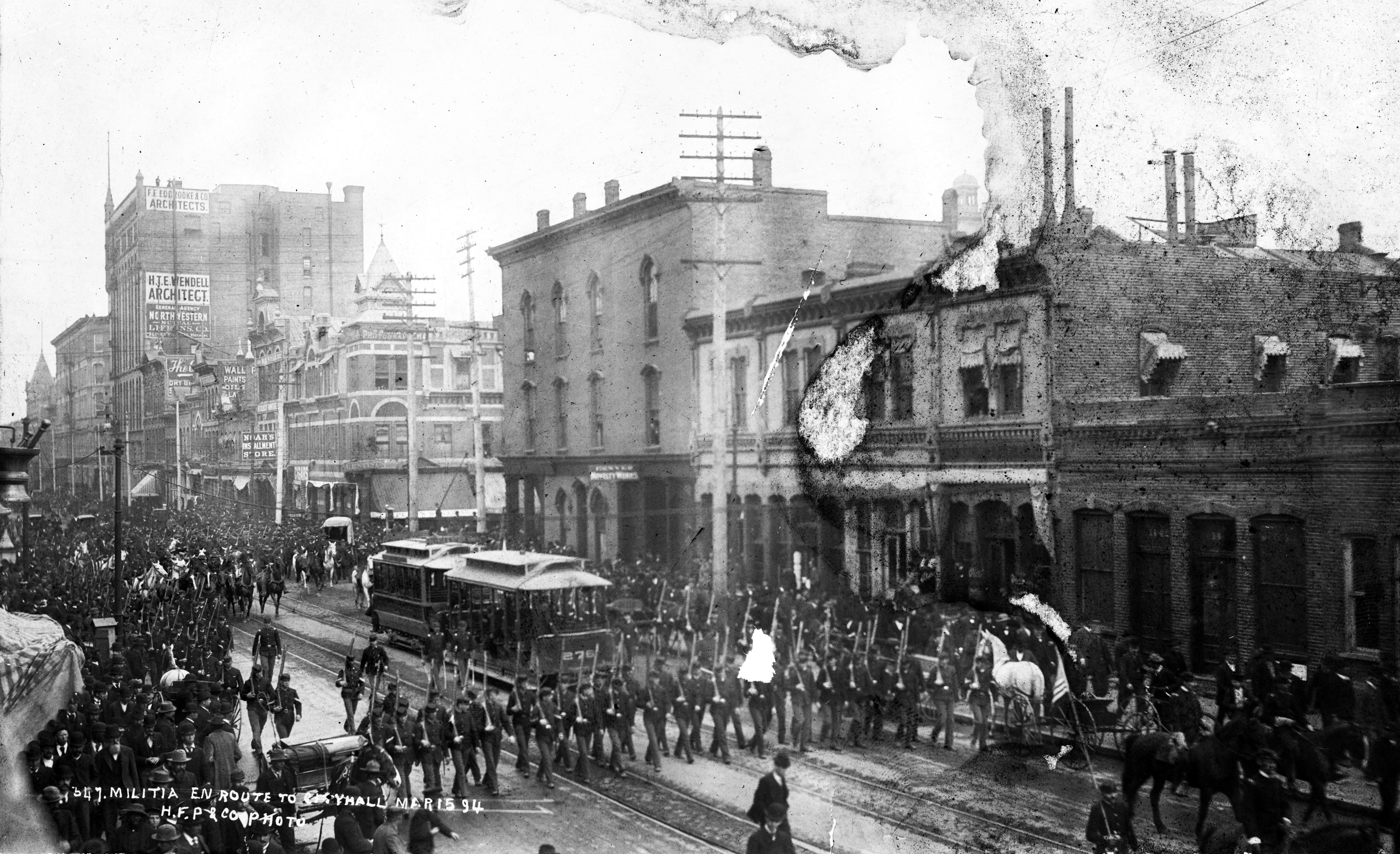 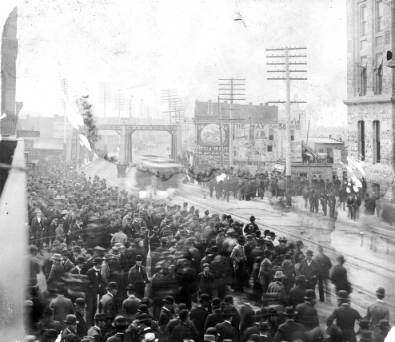 Rocky Mountain News, March 18, 1894. The "thug" with dynamite is a reference to Smith, who reportedly climbed to the bell tower waiving a stick of dynamite and threatening to destroy the entire building. 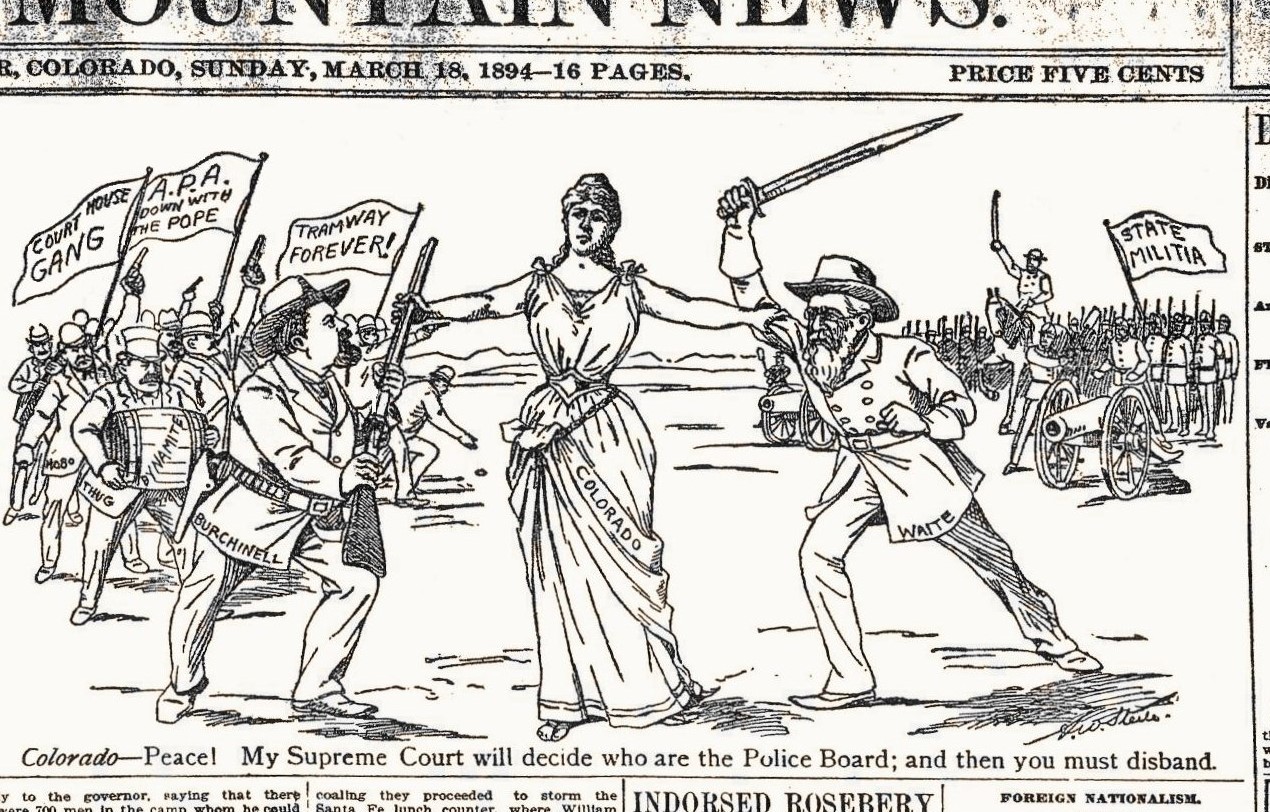 This historic marker includes the last remaining piece of the former city hall-the bell from the tower. 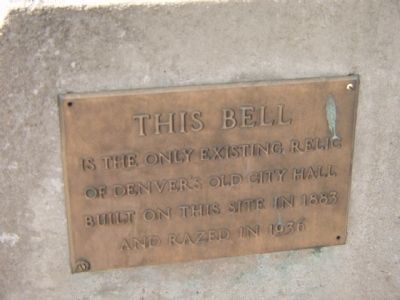 Jefferson Randolph Smith was a criminal and con-man best-known as the head of a criminal syndicate that defrauded miners during the Klondike's gold rush prior to his death in 1898. Smith got his start as a ocn-man in the West, moving to Denver in the 1880s and making his first fortune with a "soap lottery" - a clever gambling racket where Smith sold bars of soap under the premise that some bars contained a significant amount of money. After residents detected a pattern where the lucky soap purchasers were nearly always Smith's co-conspirators, the con-man earned the nickname "Soapy Smith."

Smith's criminal network expanded far beyond short cons to operating saloons and gambling houses. By the late 1880s, the city's newspapers reported tales of bribery and corruption between Smith and city officials-especially those who operated the city's fire and police board. Smith fled the city temporarily but returned and by 1892, he was able to secure contracts and jobs for his network of supporters as well as lax enforcement of laws against gambling, prostitution, and narcotics.

Elected on the Populist ticket pledging progressive reform and an end to corruption in 1893, Governor Davis Hanson Waite took on Denver's notoriously corrupt city administration that was known to have connections to Smith's growing criminal empire. As the city's growing middle class became less willing to tolerate Denver's gambling, prostitution, and narcotics, politicians like Waite gained control of the state legislature and pledged reform.

In 1893, the state legislature revised Denver's charter in a manner that removed the mayor's control over two of the six city commissioners. In the future, the governor would appoint the commissioners who headed the city's police and fire boards. In the past, control over these boards provided an important source of patronage and that allowed the political machine to provide jobs to their supporters. In return, these men kicked money back to the machine and followed their orders to allow Smith's criminal activities to go unpunished. If the governor could control these city offices, Soapy Smith and his supporters recognized that Waite could appoint men might take action against their illicit business activities.

The confrontation between Denver's political machine and the reform-minded governor came to a head in March of 1894. Months earlier, the state legislature revised the city charter in a manner that allowed the governor to appoint two of the city's commissioners who were given authority over the administration of the police and fire departments. The governor used this power to replace two men he believed were using their power to support organized crime and threatened to send the state militia should they defy his order. Rather than accept their removal, these men and their supporters turned the city hall into an arsenal, challenging the governor to respond in a way they believed would convince citizens that the state was trying to usurp the authority of the city's elected officials.
In the spring of 1894, the governor used this power to remove members of the fire and police board. Rather than accept the decision, Denver's political machine challenged the governor's authority in the courts and threatened armed conflict. The Governor responded to the challenge by threatening to send the state militia-an action he took when members of the machine turned City Hall into an arsenal. Members of the police and fire boards, together with other city officials and dozens of Smith's men barricaded themselves inside the building in March of 1894. One local paper reported that every criminal in the city who was not in jail was employed as a deputy sheriff.

The conflict nearly led to a war on the streets of Denver for a week, as both sides prepared for battle-the supporters of the city government occupying City Hall surrounded by state militia with cannon and Gattling guns. The action alarmed many and the Supreme Court reprimanded the governor for inflaming the situation but upheld the governor's authority in the case. After the Supreme Court upheld the new city charter that gave the governor authority to appoint fire and police commissioners, the former city officials backed down and state and federal troops left the city.

This quick walking tour starts at the iconic Daniels & Fisher Tower and winds through the heart of downtown with stops at some of the most interesting historical markers and buildings in the city.