First of the 21 missions and known as the Mother of the Missions, the Mission San Diego de Alcalá was founded on July 16, 1769 by Spanish Franciscan priest Junípero Serra. As the farthest south of the missions, it was the starting part for travelers and goods coming overland from New Spain (Mexico). It was designated as a Minor Basilica in 1976 by Pope Paul VI, and the Mission today is an active Catholic Parish in the Diocese of San Diego and an important cultural center for people of all faiths. Given its historical significance, the church was placed on the National Register of Historic Places in 1970; it is also a National Historic Landmark, a California Historical Landmark, and a San Diego Historical Landmark.

A view inside the Church. 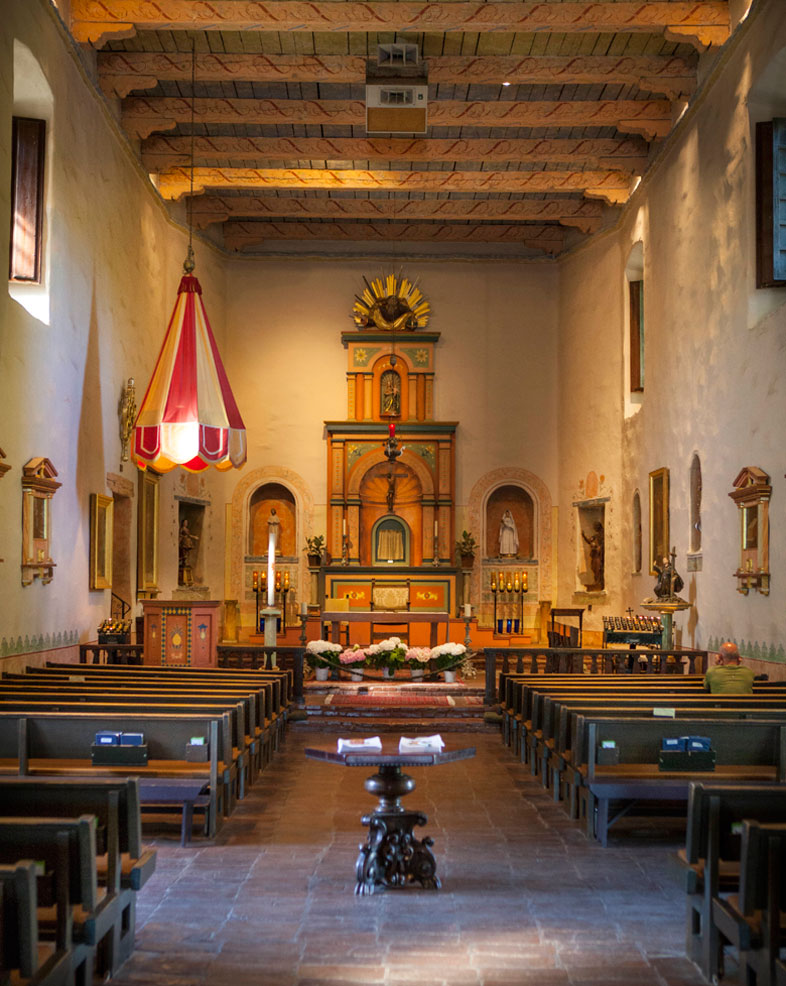 The present-day facade of the Mission. 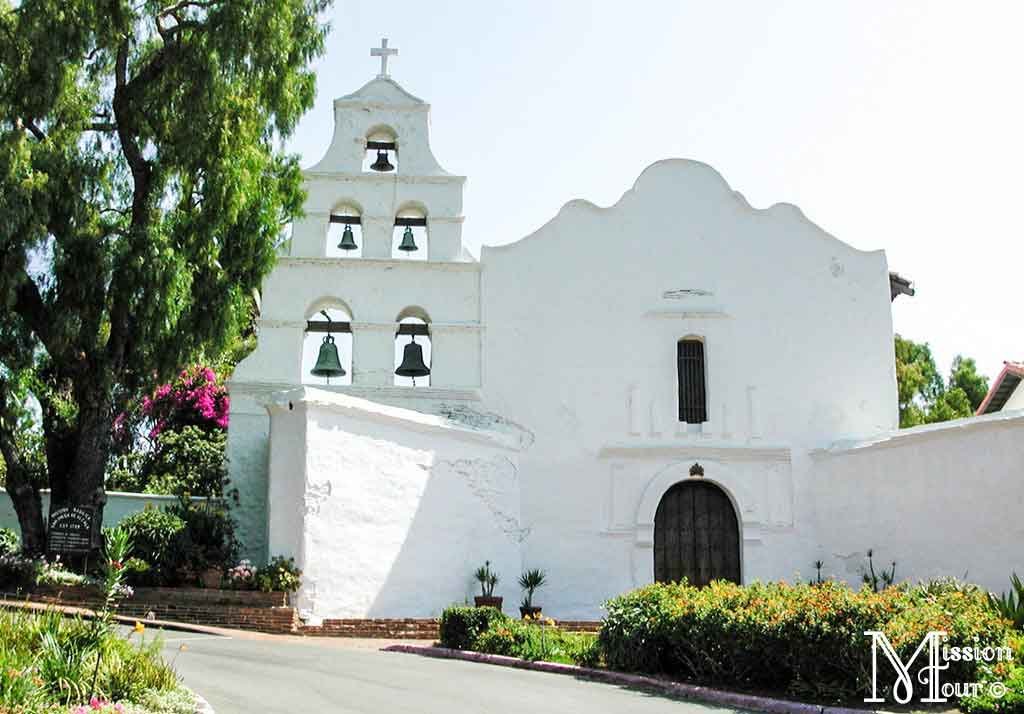 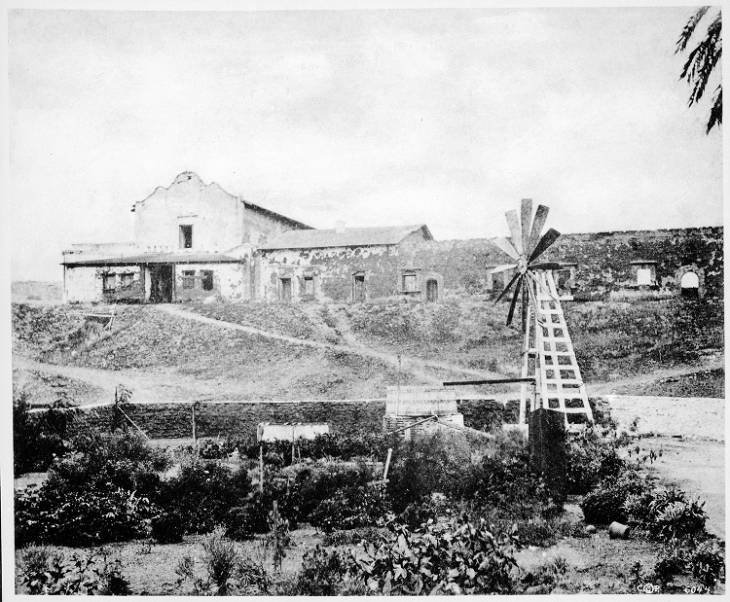 A color postcard from 1915 illustrates the dire need for preservation and restoration at the Mission (UC San Diego). 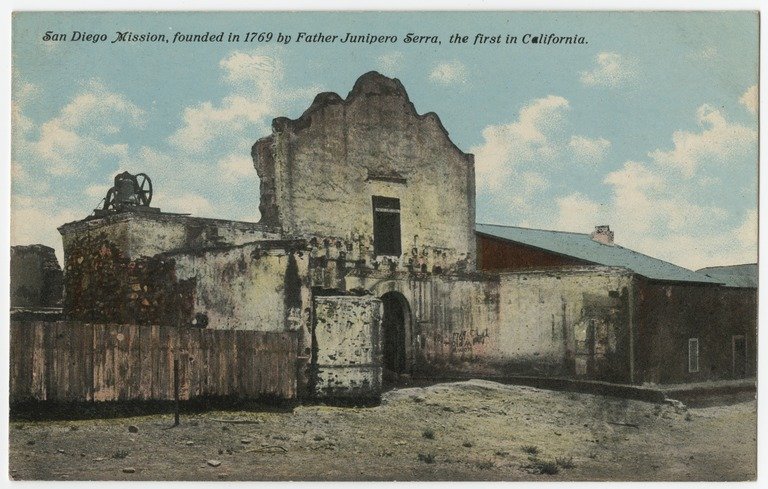 A proposed plan for reconstruction of the Mission and grounds, circa 1919 (UCLA). 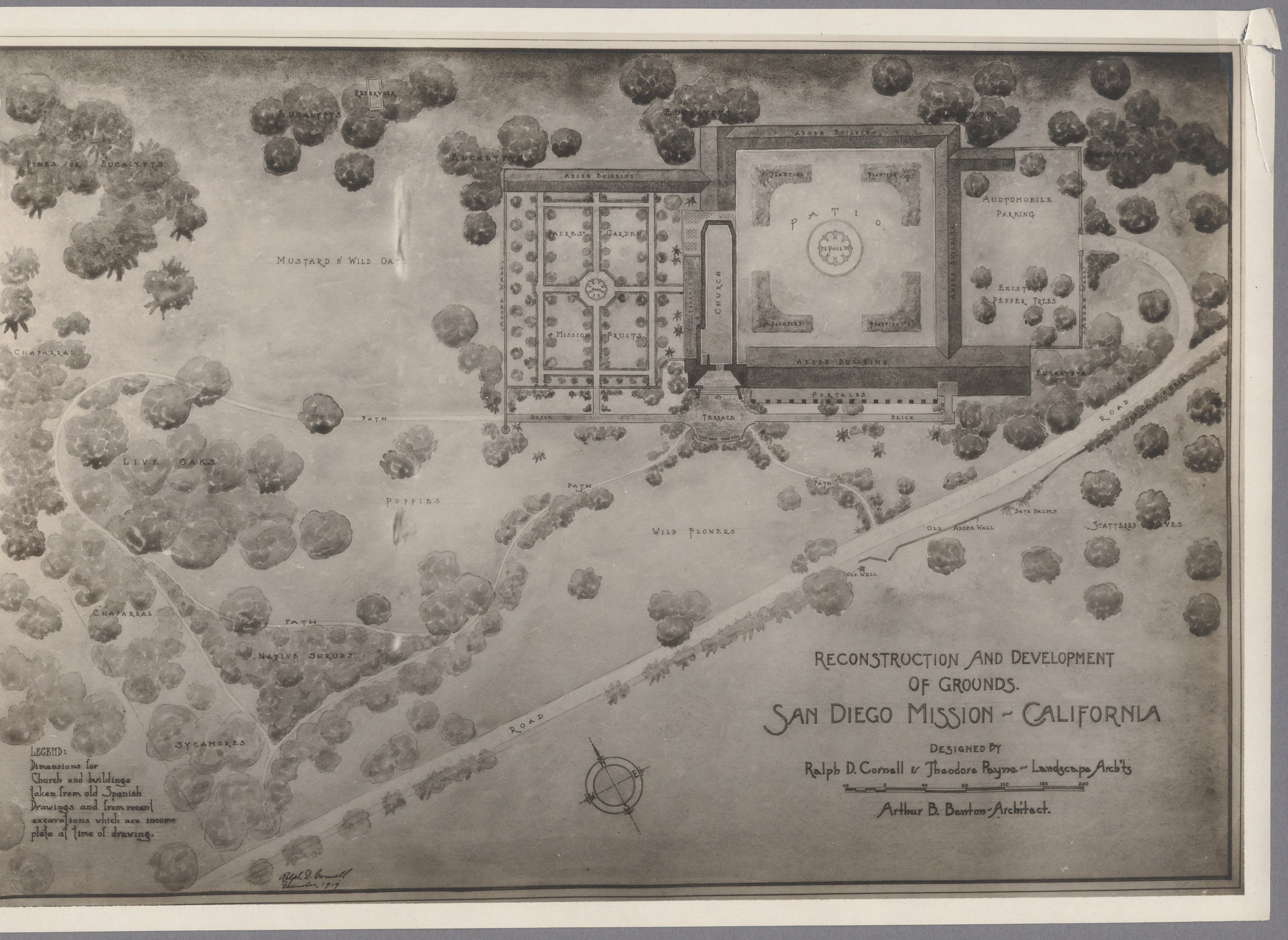 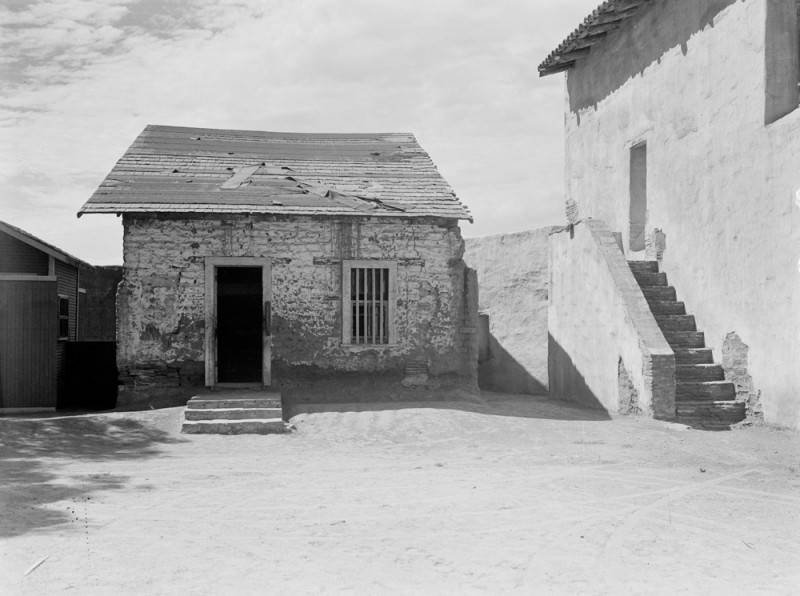 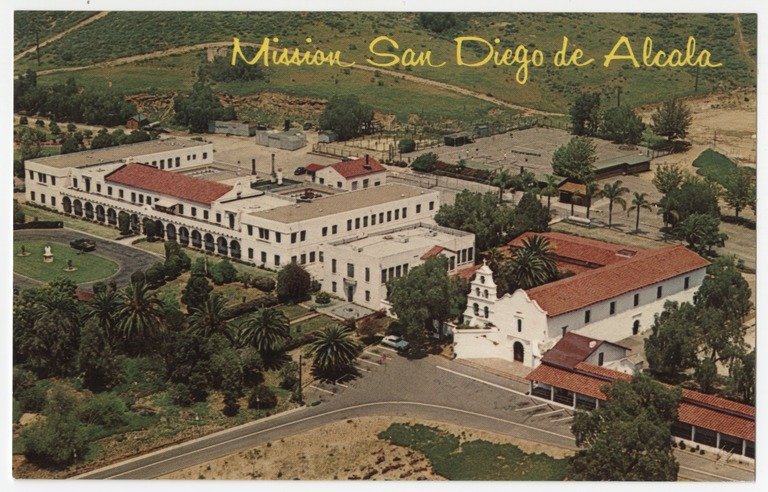 French sea captain Auguste Duhaut-Cilly recounted with distaste the poverty of the Mission during his visit in 1827. The buildings "have deteriorated and are poorly maintained." 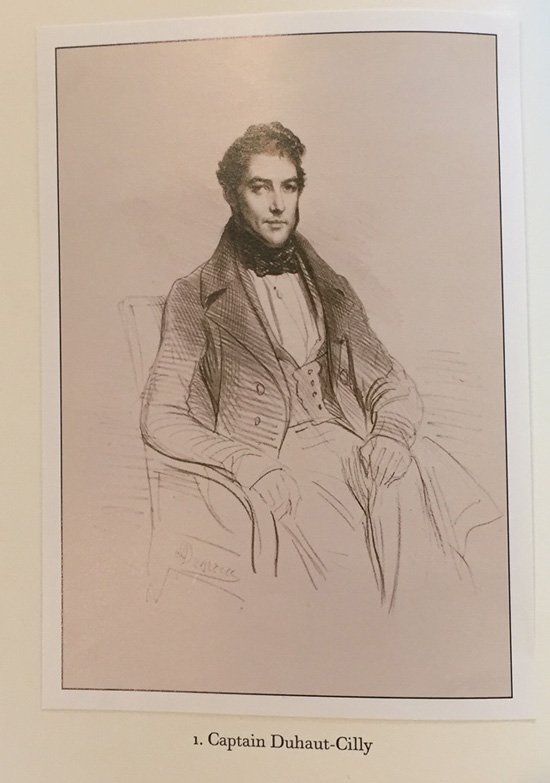 Though Spanish expeditions had combed the shores of California in the 1500s, no permanent settlements were established there until over two centuries later, when at last the Catholic Church and the Spanish throne agreed upon a mutually beneficial manner of expansion. As California held no huge warlike empires such as the Aztecs conquered by Cortez in Mexico, a group of Franciscan monks would establish self-sustaining peaceful settlements, each guarded by a mere handful of soldiers, along the length of California. Each “mission” would be only a few days by foot or horseback from the next, and would supply its own labor force from among converted Native Americans to cultivate crops and herds of cattle.

The Spanish had discovered Russian ships hunting seals off the coast of California, so there as little time to lose in securing claim to the lands they knew lay as yet unclaimed to the north. When military officer Gaspar de Portola and Franciscan Padre Junipero Serra arrived in Baja California to take over the missions there from the Jesuits who had founded them, the governor of New Spain knew he had found the leaders he needed. In 1769, a combined expedition would set out for a harbor previously discovered in San Diego. Three ships, setting out from San Blas in Baja California a few months apart, and an overland column bearing Portola and Serra with their soldiers and missionaries.

The San Antonio sailed for San Diego in January 1769, and the San Carlos in February. The San Jose set out in June, but turned back for repairs. When it left the following year, it was never heard from again. The crews of the first two ships waited at San Diego for the overland expedition, fighting sickness and hunger. Meanwhile, Portola and Serra toiled their way through the difficult desert that lay along their path, finally arriving at what is now Presidio Hill on July 1, 1769 with 60 dead of their original 159-strong company, and many others sick with scurvy. They brought little relief to the ships’ crews that had waited and prepared the settlement. San Carlos set sail back to San Blas, arriving there with only two still living, and Portola continued northward with a small group, looking for the fabled harbor of Monterey.

Mission San Diego de Alcalá was actually founded on what is now Presidio Park, next to the soldiers’ presidio (fort). Five years later it would be moved, but when Padre Serra spoke the first mass on July 14, 1769, the new Mission still needed the protection of its soldiers. Hostile Native Americans attacked the Spanish a few weeks after their arrival, while many of the soldiers were still ill. Several Spanish were killed, but the attack was driven off.

Portola returned empty-handed from his search for Monterey, by which time 19 more of Serra’s men had perished from scurvy. The soldier and the priest decided that if supplies did not arrive from San Blas by March 19, 1770--St. Joseph’s Day--they would have to abandon the new mission. That afternoon, the sails of the San Antonio passed the harbor, bound for an intended rendezvous with Portola at Monterey. Serra agreed to postpone abandoning San Diego, and four days later the San Antonio returned, having lost its anchor at sea, and brought, quite by accident, the supplies needed to save the fledgling outpost.

In 1771, ten more Franciscans arrived in preparation to staff further missions as they were founded. With the help of the new padres and a slowly growing population of Native American neophytes, Serra decided to move Mission San Diego farther away from the Presidio. The behavior of the soldiers, who were known to molest the Native American women, strained the already tense relationship between the Spanish and local tribes; Father Serra furthermore needed land and better access to water to begin growing crops for the Mission in earnest.

But on November 5, 1775, a group of 600 Native Americans, some of them neophytes, surrounded the newly built Mission, attacked and set it ablaze. The Franciscans and soldiers barricaded themselves in the cookhouse and fought through the night. “That night seemed as long as the pains of purgatory,” wrote Padre Vicente Fuster. “We were all longing for daylight.” When morning came, the Mission had been reduced to smoldering ash, and Padre Luis Jayme was found dead out in the fields, having attempted to walk out and parley with the attackers.

Serra rebuilt the Mission on that site in 1776, and a new church was completed in 1780. By then, hostilities with the local tribes had desisted, and the Mission began a period of steady growth. The present-day chapel was built from 1808 to 1813. Its population of neophytes peaked at 1,405, one of the most populous of all the missions.

More bad news arrived in 1833, however, a decade after Mexico had won its independence from Spain. Suspicious of the Franciscans’ loyalty and covetous of the large properties claimed by the missions, the Mexican government passed laws to secularize all twenty-one of the California missions, placing most of their lands under government administration--ostensibly to return said lands the Native Americans. In reality, most of the property was divided up among wealthy landowners, and the missions themselves fell apart without the supporting network of territory, cattle herds, and converts that had sustained them. San Diego was no exception. In 1846, Governor Pio Pico gifted the Mission and its 58,000 acres to Santiago Arguello.

Shortly after the Mexican War that saw California annexed by the United States (it achieved statehood in 1850), American troops occupied the Mission and used it as a barracks. In 1862, President Lincoln returned the Mission itself and 22 acres of land to the Catholic Church, after which it was used as an Indian school and boys’ home. In 1891, a movement began to restore the Church, and a full reconstruction of the chapel was finally achieved from 1931 to 1941.

In 1862, the government returned all of the missions in the state back to the Catholic Church and the mission became an Indian school and a boys' home. Restorations began in the early 1930s, and the church was rededicated in 1941.

Duhaut-Cilly, Auguste. Translated by Fruge, August and Harlow, Neal. A Voyage to California, the Sandwich Islands, and Around the World. Berkeley, California. University of California Press, 1999. pp. 99-100.