Established in 1866, this historic site was the location of Fort Phil Kearney, named in honor of Civil War General Philip Kearney. The fort was one of the most important posts created by Col. Henry Carrington to protect the Bozeman Trail that led to Montanna's goldfields. The fort was built from timber that came from several miles away. Soldiers stationed here were among the eighty troops that perished in the Fetterman Massacre when Native tribes lured the fort's commander to send eighty men and Captain William Fetterman into a trap. Following the Fort Laramie Treaty of 1868, the fort was abandoned and later burned by area Indian tribes.

This sign serves as a reminder of the fort that was located here. 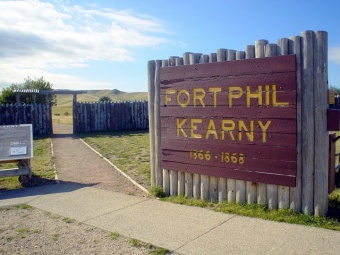 The 1867 image of Fort Phil Kearny is from Wyoming Tales and Trails. thanks. 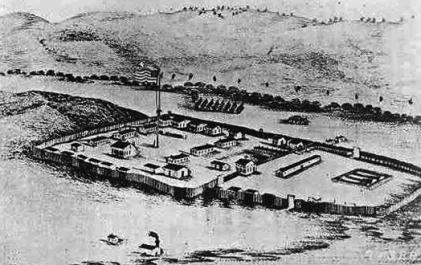 The fort was named in honor of Union General Phillip Kearney who led troops in the Civil War. Kearney was born June 2, 1815 in New York City to a wealthy family. He joined forces under his uncle regiment as Second Ltn. in the Dragoons in the year of 1837. He later attended the French Cavalry school in France. He was a military confidential assistant to Winfield Scott and Alexander Macomb who were the general in chief of the Army when he returned from France. In the Battle of Churubusco he was severely wounded and had to have his arm amputated. In the Civil War, he commanded a regiment in part of the Franklin Division. He has served in numerous battles and skirmishes in the United States.

Colonel Henry B. Carrington was an author, engineer, lawyer and an officer of the Army during Red Cloud's War and the Civil War. He was instructed to go west and build forts along the Bozeman Trail to protect the trail from Indian raids in 1866. While completing Fort Phil Kearney he commanded the fort, and would have to send men to cut lumber several miles away.

In December of 1866 over fifteen hundred Indians attacked men sent out to gather the lumber. Under command of Captain William J. Fetterman, eighty troops lost their lives in what is known as the Fetterman Massacre. Carrington was relieved of command immediately and retired in 1870. Ulysess S. Grant gave orders to abandon the post following a 1868 treaty and area tribes set fire to the fort shortly after.

The Bozeman Trail was named after John Bozeman and is known for many instances of violence. The trail started from central Wyoming and stretched to western Montana. From the perspective of Indian tribes, who were promised the land forever under previous treaties, the trail and those who crossed it were threats to their way of life and the U.S. government was violating the previous agreements.