The Portland and Oregon Maritime Museum

The Portland was a steamboat built in 1947, which operated as a tugboat in the city's booming oil industry and was the last steam-powered tugboat to be built and used for inland navigation in the country. Today the ship is permanently berthed on the western shore of the Willamette River and houses the Oregon Maritime Museum. The ship was added to the National Register of Historic Places in August 1997.

The Portland as it appears today in its renovated condition (oregonlive.com) 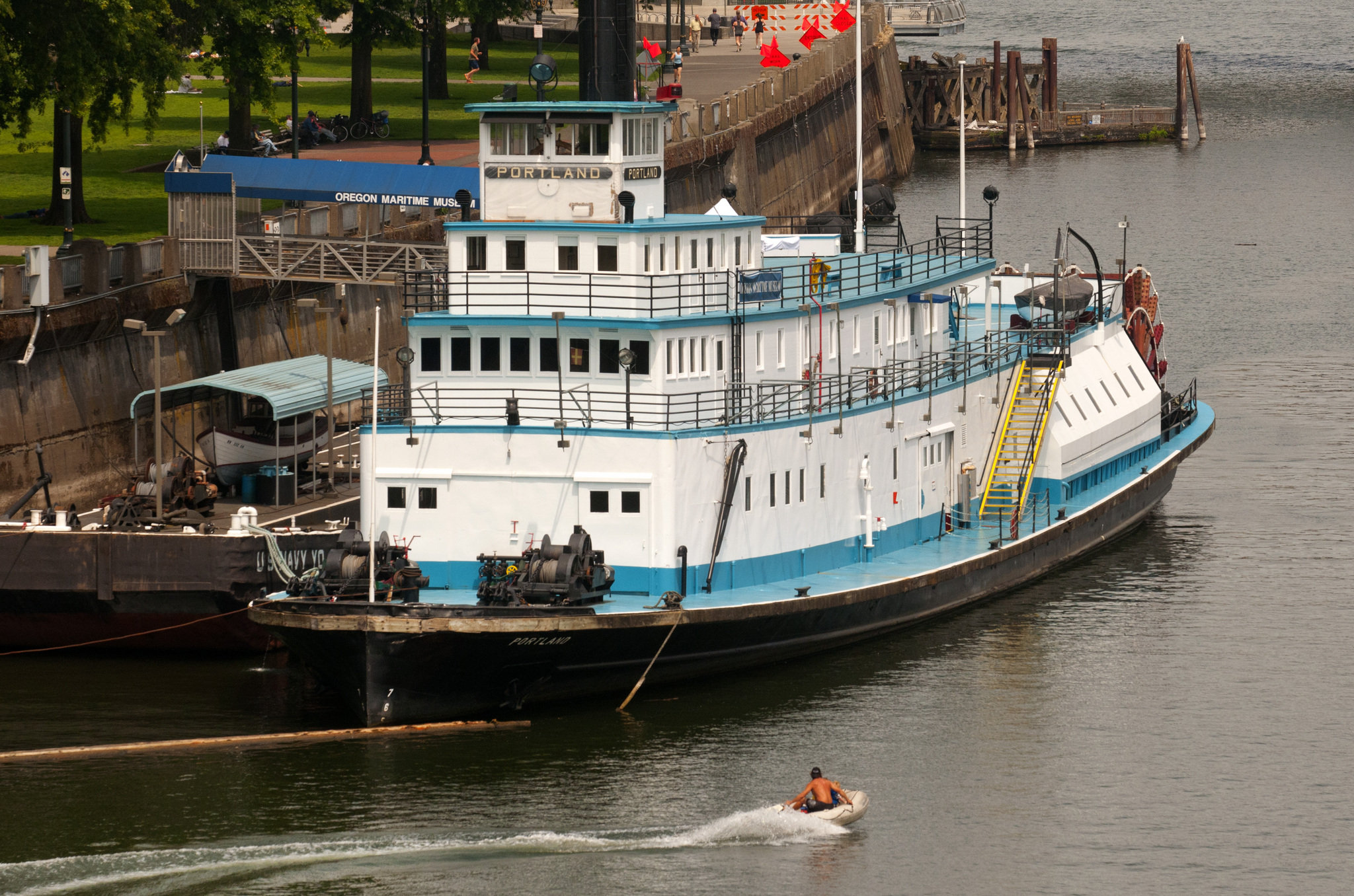 The Portland was preceded by the Portland I, built in 1919. By the 1940s the wood-hulled original had fallen out of use. It was replaced in 1947 by Portland’s Northwest Marine Iron Works, who manufactured a steel sternwheel tugboat. At two hundred and nineteen feet long and twenty-six feet wide the Portland was small but strong. It was propelled by a wooden paddle wheel that was powered by two horizontal single cylinder nine hundred horsepower steam engines. It has a welded-steel deckhouse and wooden cabins for the officers at the bow.

This light, flexible, and extremely powerful boat was operated by Shaver Transportation Company and Willamette Tug & Barge respectively as a tug for ocean-going ships traveling to and from the wharves of the city via the Columbia and Willamette Rivers. Large ships were often stranded on the sandy banks of the rivers by the strong currents, or had trouble navigating around the many bridges one had to pass to reach the inner harbors of the city. It operated all day, every day by an alternating crew of fifteen, consisting of the captain, pilot, two ships mates, two engineers, a pair of firemen, six deckhands, and the cook. When duty called, they would bring the tug to the disabled vessel, and either drag it to freedom from the front or affix itself to the side before guiding it to safety. One illustrative tale occurred in 1957 when the Portland rescued two ships along the Willamette River. The Chateau Thierry and Louis A Milne ships had been dragged by gale-force winds downstream and into the Hawthorne Bridge. After numerous other tugs tried to rescue them without success the Portland managed to remove each ship and return them to safety.

In addition to its professional function, the Portland was frequently used as a ceremonial vessel along the entire length of the Columbia River. The most popular of these events were the regular steamboat races she engaged in, of which she won the majority of the time (though one fondly remembered race in 1952 resulted in her losing to the Henderson). The Portland remained in use until 1981, at which point steam power had been widely replaced by that of diesel. Steam power was increasingly expensive, and with many new innovations in shipbuilding – and in part due to its age – the ship was progressively more difficult to maintain. In addition, there were general changes occurring in the manner by which trade was being conducted in the city, with the spread of new types and larger sizes of container vessels and barges. The decision was made that year to cease using the ship, and although the boat tried to find alternative commercial uses for another decade eventually it was decided to retire the Portland from service.

Today, the Portland is permanently berthed on the west bank of the Willamette River, where it houses the Oregon Maritime Museum. Inside, the nautical museum contains a wide variety of maritime memorabilia and artifacts, including objects related to the early days of underwater diving, of shipyards during the Second World War, and of the history of steam power. The boat itself remains in an excellent state of preservation and authenticity, thanks to renovations made in 1991 by the Oregon Maritime Museum. Through these efforts the paddle wheel has been preserved, the original wooden cabins reconstructed, and the engine- and boiler-rooms have been refurbished. During the Maritime Heritage Festival, it was featured in the 1994 comedy film “Maverick” directed by Richard Donner and written by William Goldman. In 2012 it disembarked once more during a fundraising event for the museum, in which passengers would enjoy a dinner as they steamed gaily down the river. However, this idyllic evening ended prematurely when they collided with the Royaliste – a replica pirate ship!