This location is the Bicentennial Park of Swansboro North Carolina. This park holds the spirit and roots of the now modern day Swansboro North Carolina. At the heart and center of the park lies the Statue of Otway Burns Jr., native son to the town of Swansboro. Having much success as a naval hero through the War of 1812 and accomplishments of the shipbuilding industry, this statue is a dedication to the man and the settlement that founded this rich town. Also, here lies the historic marker of the Prometheus which was the first steamboat to be created in the state of North Carolina in 1818. Created by none other than, Otway Burns Jr..

This photo is the entrance into what is now downtown Swansboro. Across the bridge from Bicentennial Park, it holds the root of where this town was founded back in 1783. It still holds its original building structures for historical significance. 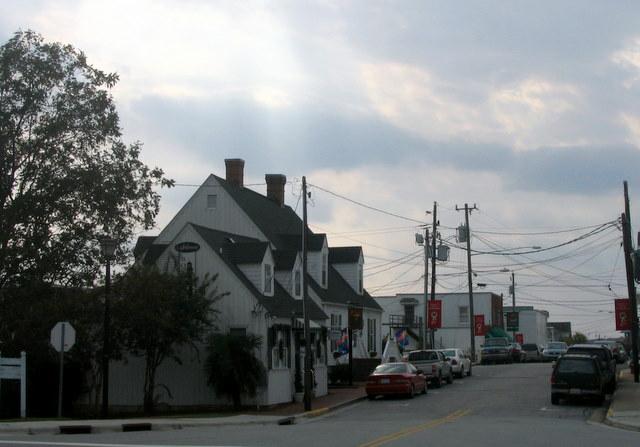 This is the marker of the Prometheus. A historical marker that represents one of the many accomplishments to arise from this town pf Swansboro. Built by the native son Otway Burns Jr., it sailed the White Oak River ranging from Wilmington to Southpor 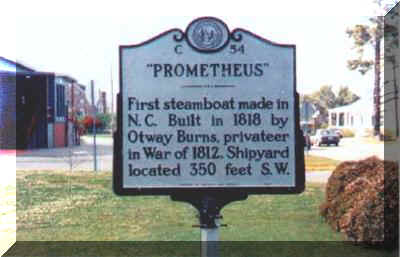 This is a drawing of what the Prometheus looked like back in 1818. Unfortunately, no pictures could be found of the first steamboat of North Carolina but this drawing provides an accurate description of the vessel in its entirety. 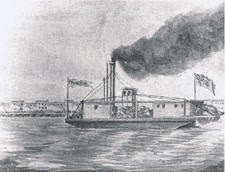 Here lies the statue, at the heart of Bicentennial Park, of Otway Burns Jr.. It was built specifically facing the water to allow Burns to watch over the very water that his life revolved around. Famous privateer and naval hero that lies at the heart 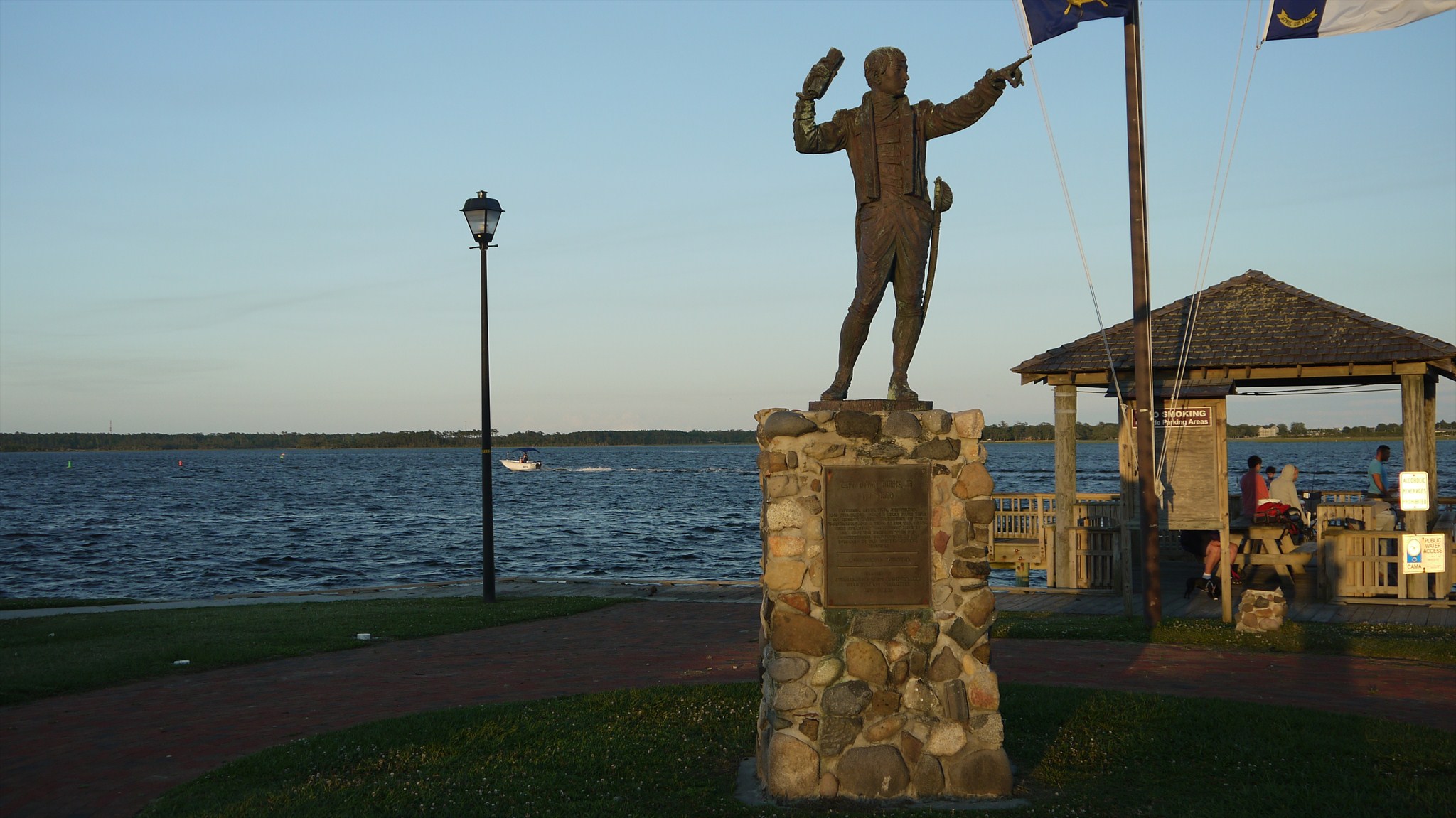 This picture is a modeled photo of Burns's battle vessel, The SnapDragon. With this vessel, Burns and Pasteur sailed along the coasts of the eastern United States duing the early 1800s capturing and damaging British merchant ships. These battles are 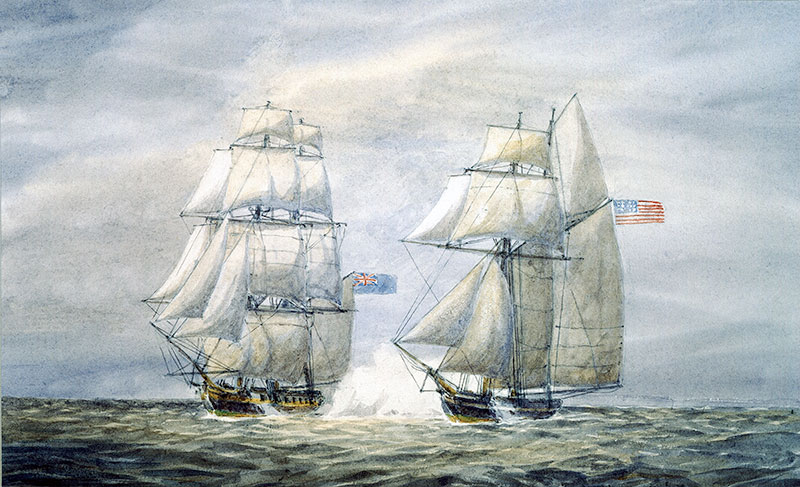 Within the heart of Swansboro, North Carolina, lies the Bicentennial park with  the statue of Otway Burns Jr. overlooking the White Oak River, the very domain in which he ran. Otway Burns Jr. (1775-1850) was born in a suburb of Swansboro known as Queens Creek and has inherited the merit of, “Swansboros most famous native son.” Living by such a big river, which is an outlet to the Atlantic, Burn’s upbringing revolved a lot around the water to where he fell in love with it. As a merchant captain in his early days, Burns was known for his successes in the area of privateering during the early years of the War of 1812.

Along with his fellow colleague, Edward Pasteur, Burns decided to purchase a first vessel from a New York city port known as, “The Zephyr.” During these years, Burns and Pasteur made their living traveling up and down the east coast of the United States. A few years later, a group of eight investors bought the Zepher and rechristened as the Snap Dragon. Through the years of 1812 and 1813, the Snapdragon featured in many encounters and successes along the east coast waterways.

Their first success was just weeks after the rechristening in which they captured a British merchant ship that was heavily armed with over a dozen heavy weapons. After their first prize, the Snapdragon continued its success all along the coast against the British merchant/army vessels. With Burns’s deceiving tactical skills, the Snap Dragon was able to damage/destroy seven British ships as well as escape their pursuits. One tactical decision he is known for is the disguise of his vessel as a poor merchant ship. With their guns out of sight, Burns was able to topple over five British ships using the technique. Burns was named a naval hero by President Andrew Jackson.

After his privateering life came to an end, Burns continued his love for the sea by pursuing a successful career in shipbuilding. By the early 19th century, the North Carolina coast had become quite popular in terms of trade/commerce of both the US and foreign exports. Burns took advantage of heightened maritime commerce building the steamboat, Prometheus, which at the time was just just the second steamboat operating in North Carolina. Burns' steamboat traveled the waterways from Wilmington to Smithville (current day Southport). “Aided in Wilmington’s popularity over the waterways and their steamship trade attracted foreign-hulls all the way from Britain and deeper parts of Europe” (Barfield & Davis, 2006). The Prometheus also carried mail as well as passengers ranging from Wilmington all the way to the Outer Banks. The popularity of the steamboat opened up commerce throughout eastern NC inland cities, connecting the area to coastal communities and attracting trade across the state. This commerce by way of the water dominated Swansboro and the NC coast through the 1920s where the invention of the combustible engine made the Prometheus obsolete.

Fast forwarding to current times, the Bicentennial Park was dedicated on July 4th, 1983 to commemorate the founding the town of Swansboro in 1783 by Theophilus Weeks. Since then, this park has become the heart and soul of this town and its life on the water. Swansboro is known for its fishing ports and fishing in general. The park has a little bridge that connects it with the Historic downtown Swansboro, where the original town still stands today. The Otway Burns Jr. statue and park has become one of the chief tourist attractions in Swansboro as it connects to the very root of the town. As the park has developed,  a gazebo on the water upon which Otway Burns looked has made this park one of the hottest fishing spots along the Crystal Coast for both natives and tourists. This park, among many other attractions brings tourists from all over the eastern part of the United States. This park, with this statue, stands as a reminder of what's come before and the connections to water that are so important in eastern North Carolina.

No Hours allowing the site of this park