An exterior of red Colorado sandstone and elegant Richardsonian Romanesque design make the Central Presbyterian Church at 1660 Sherman Street one of the more eye-catching structures on Capitol Hill. The church’s tower, with its high, narrow lantern openings rising several stories above the street, recalls a time when church spires still competed with office towers as dominant features of the downtown skyline. Constructed in 1891-1892 and designed by prolific local architect Frank E. Edbrooke, the church’s exterior is an excellent example of the Romanesque Revival style pioneered by New York architect H.H. Richardson. The church’s spacious interior incorporates design elements, such as curved pews, inspired by the theater in which the congregation met while the church was under construction. 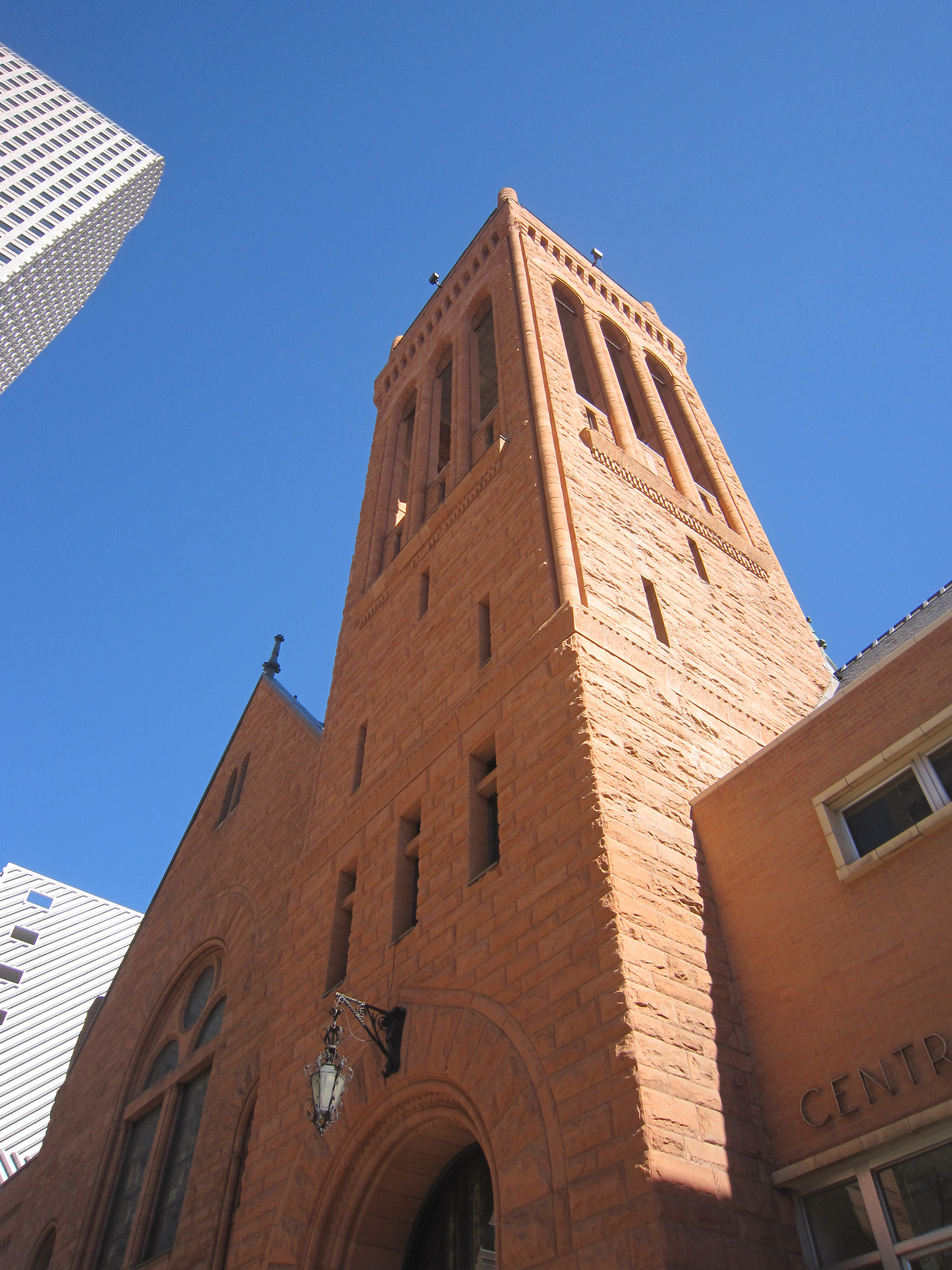 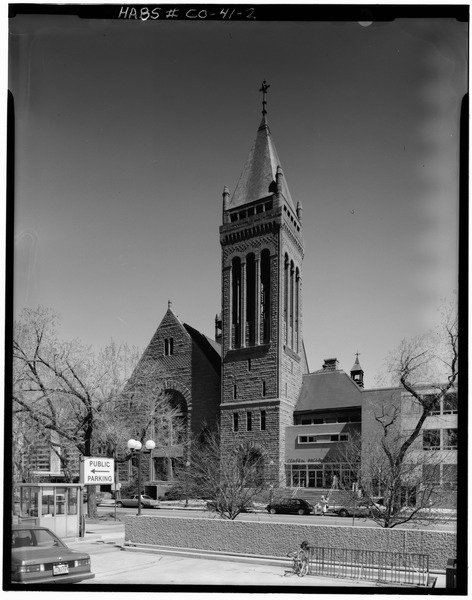 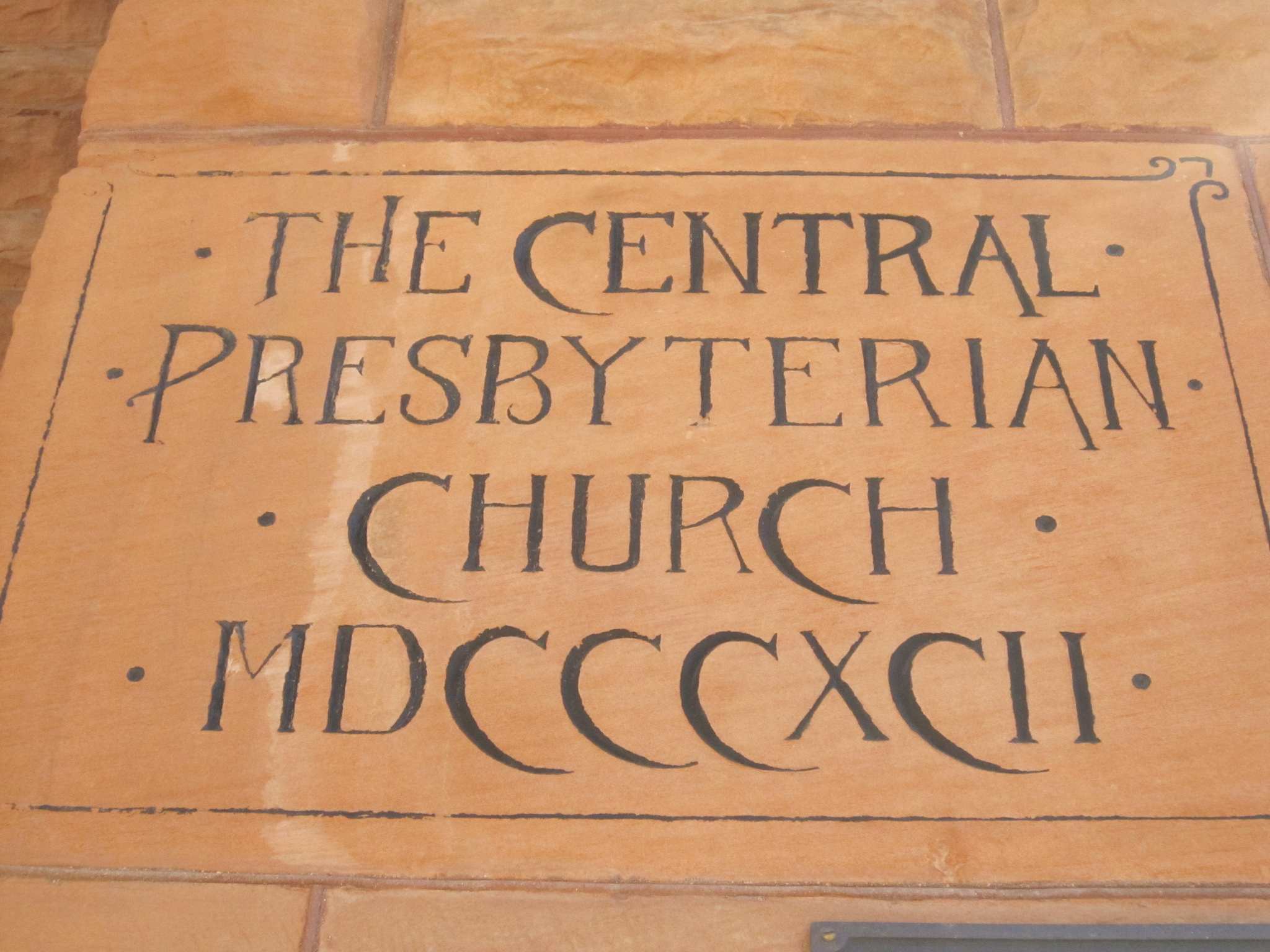 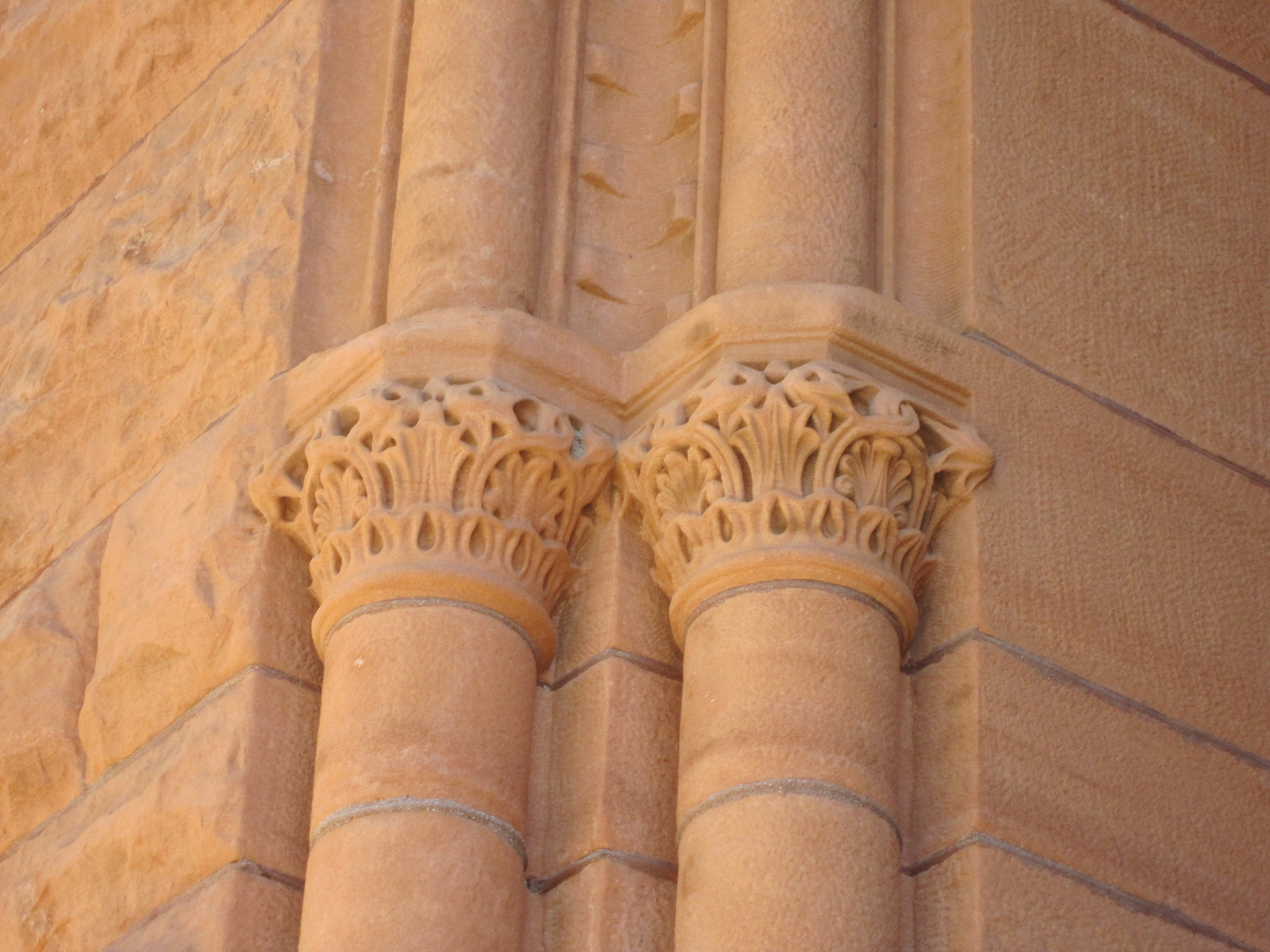 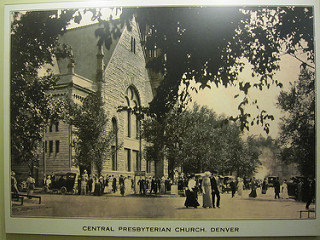 The interior of Central Presbyterian Church, photographed by the Historical American Buildings Survey. Its design was influenced by the theater in which congregants met while the church was under construction. 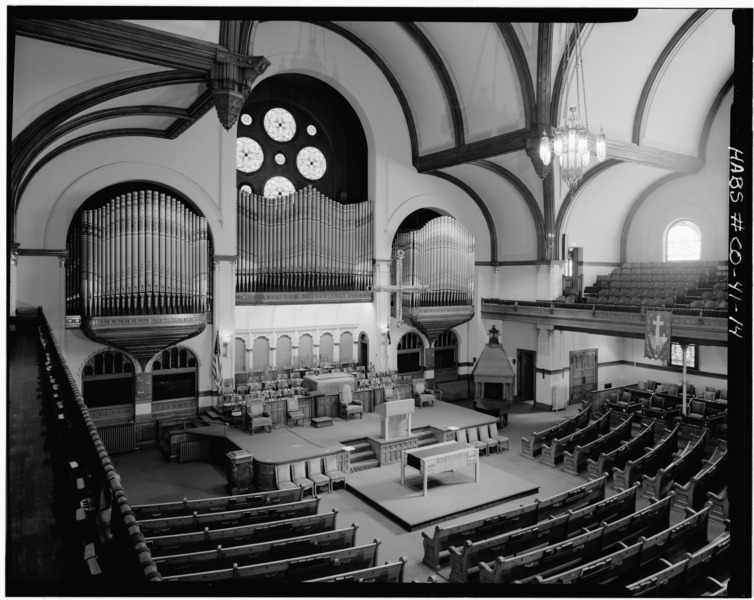 The Broadway Theater in the Hotel Metropole, demolished in 1984. Central Presbyterian's congregation held services here while the church was being built. Image from CinemaTreasures.org. 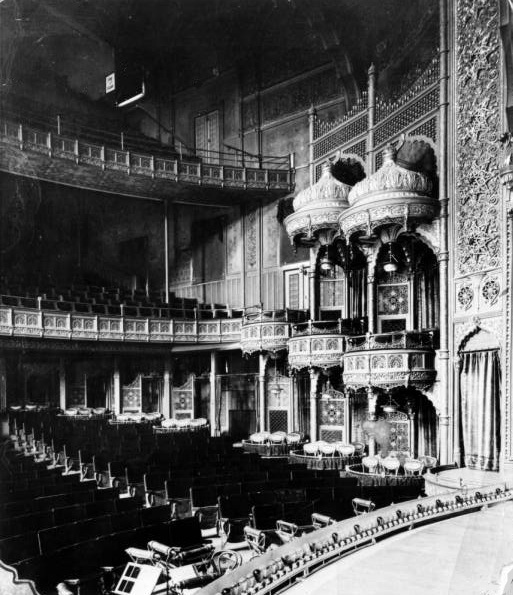 Central Presbyterian Church traces its origins to the earliest days of Denver’s settlement during the Pike’s Peak Gold Rush. The mission that would grow into Central Presbyterian was founded by Rev. A. T. Rankin of Buffalo, New York, in the summer of 1860. The rough character of the early mining settlement is reflected in the story of how, when Rankin and church trustee General William Larimer went to place an ad in the Rocky Mountain News announcing their frst Sunday service, they found another resident attempting to kill the editor and his assistant and were forced to intervene.

Later examples of Central Presbyterian’s involvement in the life of the city include a Railroad Union Mission to rail workers and a Chinese School, which served the city’s Chinese community from 1877 to 1819. The church was also a driving force behind the founding of the Presbyterian Hospital, now Presbyterian-St. Luke’s.  Currently among many other missions, the church maintains a program for the working homeless, New Genesis, which includes a 110-bed shelter in the church’s basement, and runs a drop-in center for LGBT youth, Rainbow Alley.

The current structure is the third to house Central Presbyterian.  By the beginning of the 1890s, the church had outgrown its previous building at 18th and Champa, a structure known as the “church of the seven-spot diamonds”, thanks to its distinctively patterned roof. The central business district was becoming more crowded and commercial, and when the time came to move, Central Presbyterian became one of a number of churches to find a home on Capitol Hill, then a fashionable residential district.

The new church was designed by Denver architect Frank E. Edbrooke in the style known as Richardsonian Romanesque, after its pioneer, H.H. Richardson. A revival of the early medieval Romanesque style, Richardsonian Romanesque emphasized simple, massive forms supported by the rounded arches characteristic of the style. Edbrooke’s design for Central Presbyterian church forms a nearly perfect square. The application for the National Register of Historic Places described the church’s walls as “sheer and relatively unadorned…with a thin, stretched quality”, especially in the soaring bell tower. The thin metal spiral staircase visible through the elongated lantern openings only increases the sense of height. The church was entered in the National Register of Historic Places in 1974.

The National Register application also cites a description of the church as “spare, simple, and coloristically unified.” As a building material, Edbrooke employed warmly colored sandstone quarried at Red Rock Canyon near Colorado Springs. Edbrooke was also the architect responsible for another striking sandstone building in the immediate vicinity: the Brown Palace Hotel, under construction at the same time a few blocks away, using sandstone from Eagle County.

While the new church was under construction, the congregation met in the Brodway Theater, located inside a third Edbrooke-designed structure, the Metropole Hotel  at  18th and Broadway (demolished in 1984). The congregation urged Edbrooke to improve the sight lines and acoustics of the new church by adaping features of theatre seating, including curved seat rows, boxes, and side balconies.  These qualities lend the church to use as a performance space; the community-based Denver Philharmonic Orchestra has recently made Central Presbyterian its new home, and is building a stage within the existing chancel which will be named for pioneering female conductor Antonia Brico, who worked with the orchestra for many years. The church maintains a regular schedule of services and is also a popular wedding venue.