This historic home was constructed in 1880 by Richard Ratcliffe Farr at the site of the farmhouse where, at age 14, he fired on advancing Union troops. 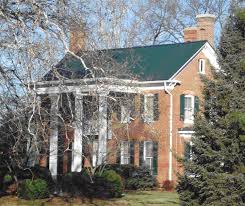 The Farr family enjoys a storied history in Fairfax, dating back to 1797, but it was during the Civil War that the family truly made a name for itself. At the young age of fourteen years old, Richard Ratcliffe Farr sought to protect the Farr house by firing upon the Union troops. Although successful at first, the troops came back and burned down the house. The replacement of that house, finished in 1880, is the historic house that stands today.

Richard Farr's grandfather acquired the land for which the historic house sits in 1797 as payment for his service in the Continental Army. When Richard discovered that Union soldiers were approaching, he placed logs across the road where the troops would have to pass, and then he hid and waited in the nearby underbrush. Supposedly, legend has it; he took the soldier by surprise when he fired on them. The soldiers, it is believed, mistook the teenager for a group of rebels, so they retreated. However, upon learning that it was Richard Farr, they returned the house and burnt it to the ground.

Inspired by the experience, Richard a few years later joined Mosby's Rangers of the Confederate army (he was wounded, but survived, during a battle in West Virginia on November 19, 1864). After the war, he went on to serve as a Delegate to the Virginia General Assembly, the County Treasurer, the Superintendent of Public Instruction of Virginia, and the U.S. Marshall for the Eastern District of Virginia.

As well, in 1880, he replaced the family residence with a new structure, referred to as "Five Chimneys," which stands today. The home is an example of the Georgian style with a two-story colonnaded portico.

Richard's sons also went on to serve the community in various ways, including Wilson M. Farr worked as an elementary school teacher, was elected Mayor of Fairfax in 1918, and served as a Virginia Commonwealth Attorney. Wilson's brother, Richard (Dick), served in the Army during World War I, was the Special Assistant to the U.S. Attorney General, and also served as the Mayor of Fairfax from 1936 to 1941.

The Farr home is one of several homes left as monuments to their family's contirbution to the city. Richard not only restored the family home, but built a cottage for his grandmother ("Grandma's Cottage"). As well, in 1915, Richard's son, Wilson, built a new residence adjacent to the Farr residence after he married his wife, Edith Wiley. Wilson originally called the home "Ballynahown" after his mother's ancestral home in Ireland.