Denver's Chinatown and the Anti-Chinese Riot of 1880

Denver’s Chinatown and the Anti-Chinese Riot of 1880 On October 31, 1880, the 1600 block of Wazee Street became the epicenter of Denver’s first race riot, an outbreak of mob violence aimed at the city’s Chinese community. At that time, Denver was home to 238 Chinese residents, drawn to the Rocky Mountain region by labor shortages, mining booms, and the opening of the transcontinental railroads. Though most worked in service jobs, notably as laundrymen, the Chinese were perceived as a threat to the livelihoods of white workers, and the popular imagination associated Chinese immigrants with crime, disease, and prostitution. The presidential campaign of 1880 inflamed these passions further, and on the last day of October a white mob entered Denver’s Chinatown, attacking its residents and burning buildings. One man was killed before the violence ended. Denver’s Lower Downtown Chinese community survived this attack, but dwindled in the twentieth century due to exclusionary immigration policies before urban renewal removed most traces of its existence.

Chinese-American men pose in a photographer's studio in Georgetown, Colorado. The growth of Colorado's cities, railroads, and mines drew hundreds of Chinese workers into the state. 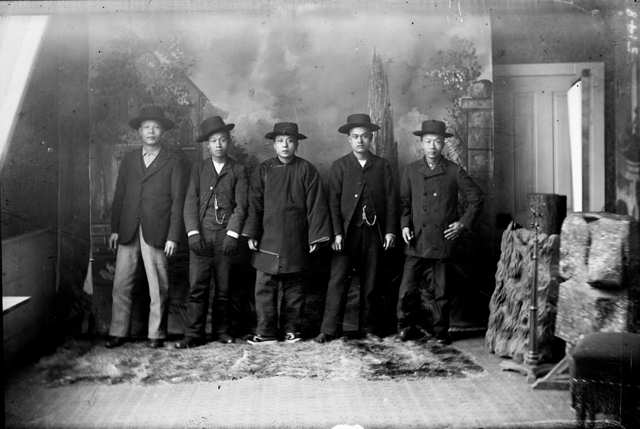 A cartoon depiction of Denver's anti-Chinese riot of 1880, printed in the November 20 issue of Frank Leslie's Illustrated Newspaper. Source: Library of Congress. 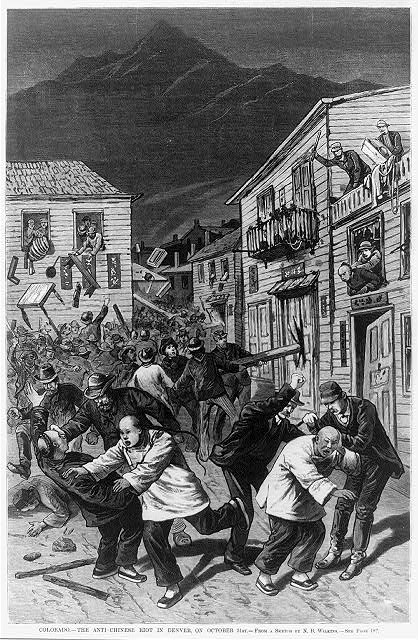 A cartoon depicting Chinese immigrants as locusts devouring Uncle Sam's crops. One of a series of anti-Chinese cartoons drawn by George Keller for a San Francisco periodical, The Wasp. March 9, 1878.Source: Library of Congress. 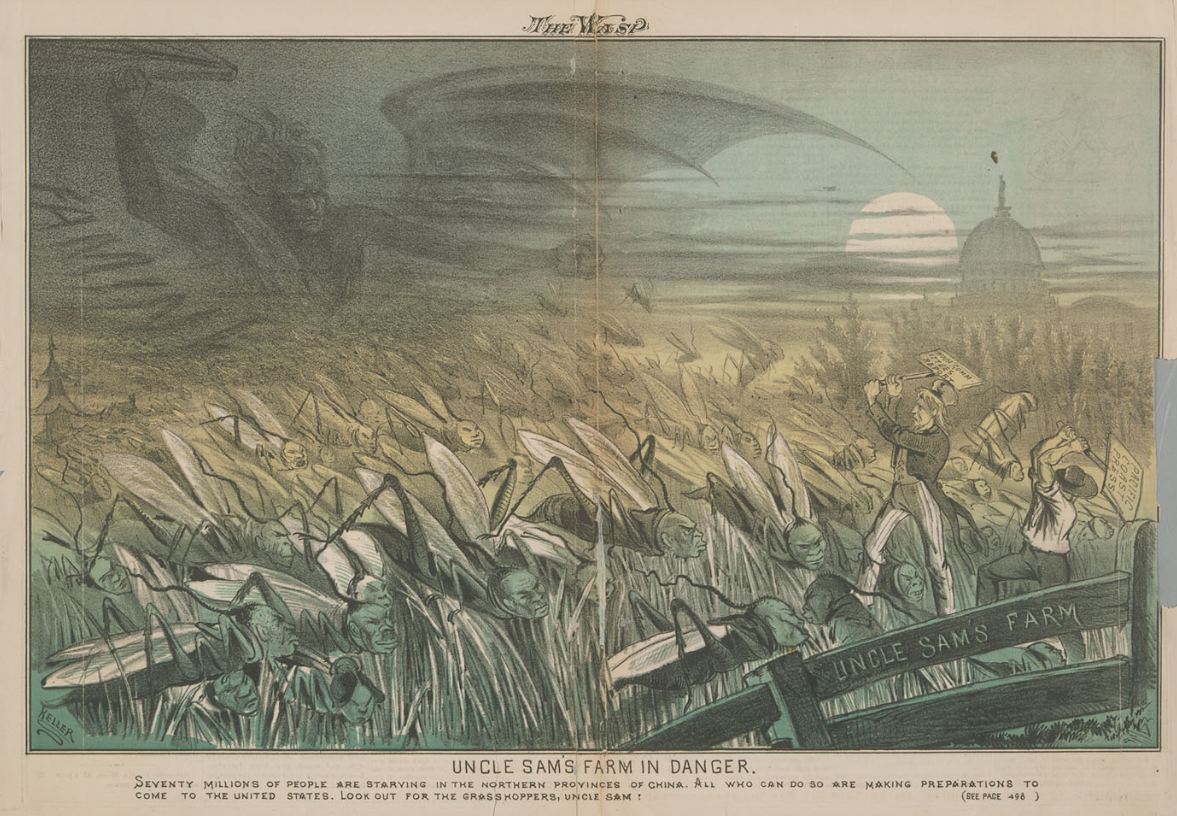 A cartoon by Jame Albert Wale depicting a Chinese immigrant caught between the anti-Chinese "planks" of both parties appeared on the cover of the July 14, 1880 issue of Puck, a satirical magazine. Source: Library of Congress. 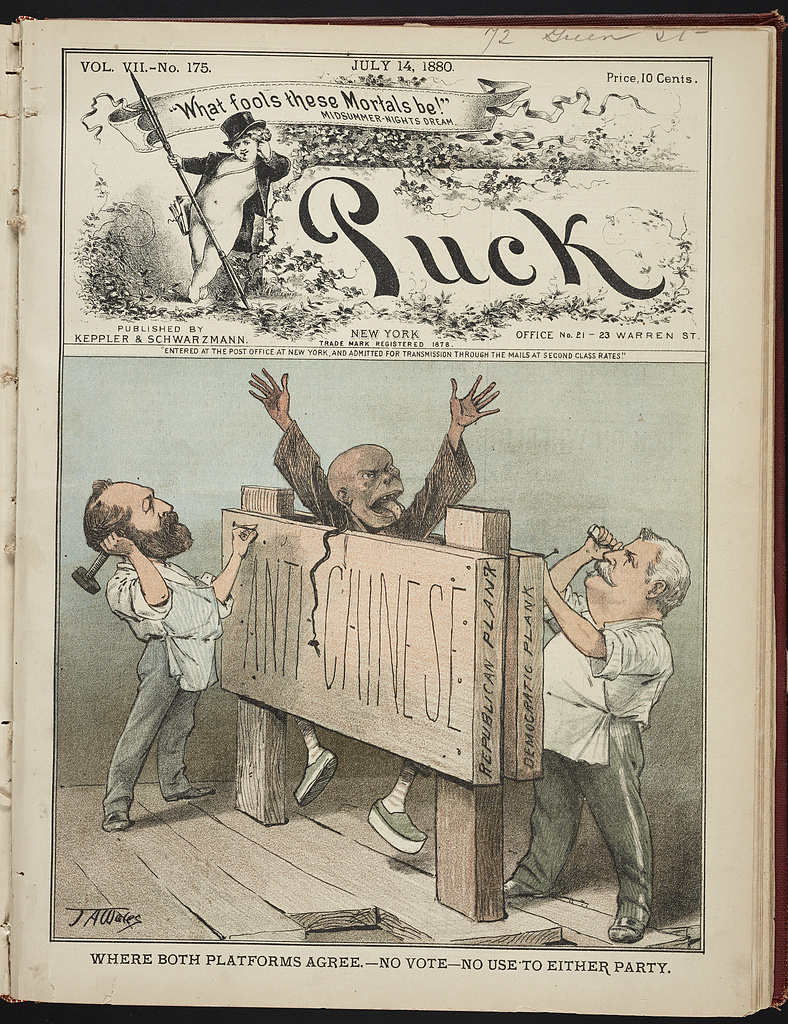 A photograph taken before1912 shows one resident of Denver's Chinatown decorating for the Chinese New Year while another smokes a water pipe. Denver's Chinese population slowly dwindled in the early decades of the century. 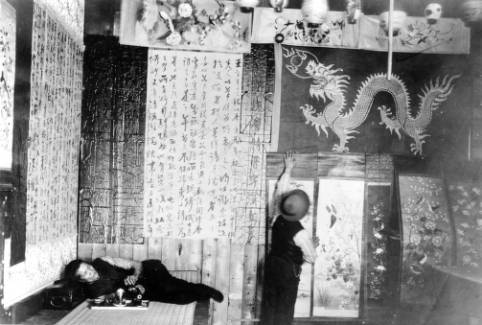 A historic plaque near the intersection of Blake and 20th Streets, commemorating the Chinese presence in Lower Downtown Denver and the anti-Chinese riot of 1880. Photo by Wally Gobetz. Licensed under Creative Commons. 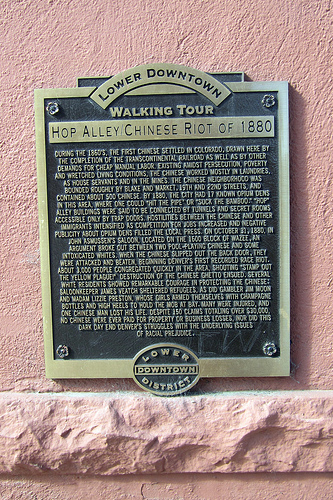 Wazee Street in lower downtown Denver, once the center of Denver's Chinatown, as it appears today from Coors Field. The anti-Chinese riot of October 31, 1880, broke out in the 1600 block. Photo by Jeffrey Beall. Licensed under Creative Commons. 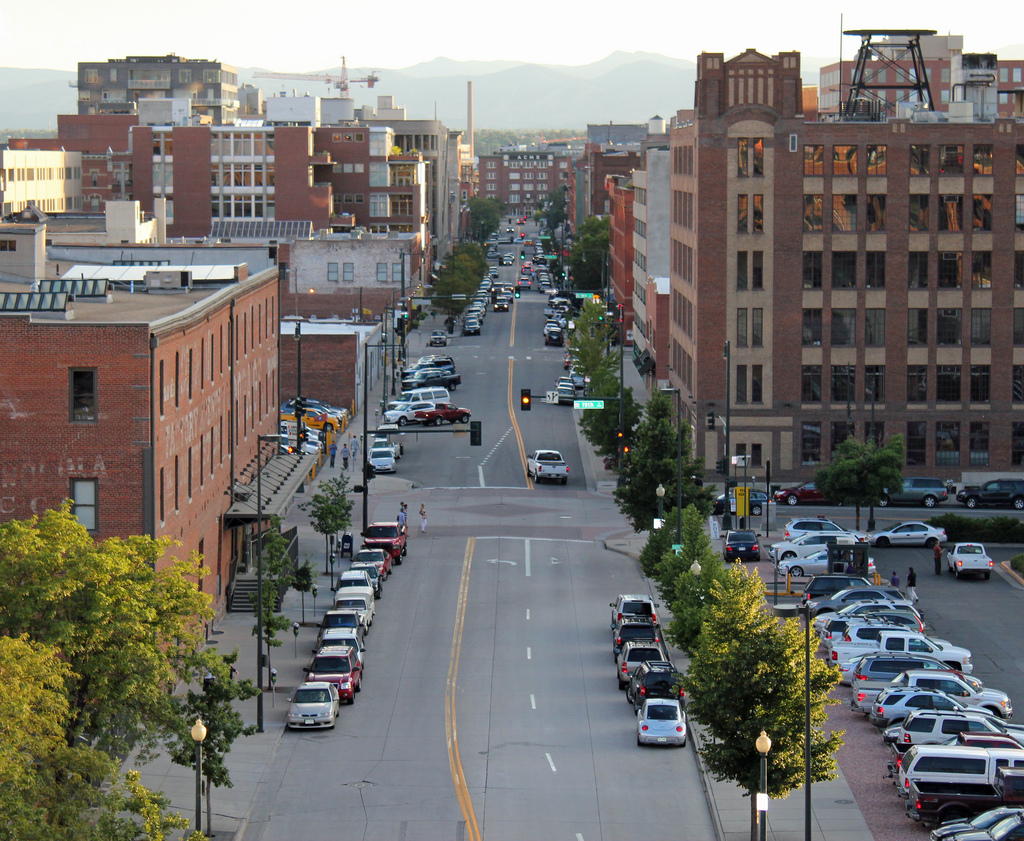 In 1870, the Colorado Territiorial Legislature passed a resolution encouraging Chinese immigrants to come to Colorado in response to a chronic shortage of labor. By the end of the next decade, several hundred Chinese had settled in the state, and approximately forty percent of them lived in Denver. The great majority came from the west coast, meaning that unlike most new settlers, they had come east, rather than west. Chinese immigration to California had been spurred by the gold rush and by the building of the transcontinental railroad, but by the 1870s the California gold industry was declining, the railroads were largely completed, and anti-Chinese violence had become a regular occurrence on the coast.

The Chinese who settled in Denver found themselves largely restricted to service work, especially laundry; perhaps eighty percent of Denver’s Chinese ran or worked in laundry services. Most of them lived on or near Wazee Street, in what is now Lower Downtown. Historian William Wei argues that the name “Wazee” itself derives from the Cantonese for “street of the Chinese”, though most sources state that the street, along with Weewatta and Champa Streets, was named for one of Scottish settler William Mc’Gaa’s Native American wives.

Denver’s Chinese district was also known as “Hop Alley”, a derogatory reference to opium dens; this name was particularly associated with the alley behind Blake and Market Streets. Today, a plaque commemorating Denver’s Chinatown and the riot of 1880 hangs near the intersection of Blake and 20th Streets.

Anti-Chinese racism was fueled by fears of economic competition and by popular imagery associating the Chinese with opium dens and prostitution; outbreaks of disease and even fires were blamed on the presence of Chinese immigrants.  In 1870s, Chinese immigrants were run out of the Colorado mining towns of Nederland and Leadville. In 1880, proposals to end immigration from China became an issue in the presidential campaign, with the Democratic candidate, Winfield Hancock, publicly supporting a ban. (Though Hancock did not win, the Chinese Exclusion Act would be passed in 1882). In Denver, the Rocky Mountain News, which endorsed Hancock, ran a series of articles attacking the people one journalist referred to as the “Pest of the Pacific.”

On the evening of October 31, shortly before the election, two Chinese men playing billiards in John Asmussen’s tavern in the 1600 block of Wazee Street were confronted by a number of drunken white men. Asmussen later testified that he helped the Chinese men leave through the back, but a fight broke out when their attackers confronted them in the alley. Over the next few hours, Denverites poured into Chinatown, attacking its residents and destroying homes and businesses. One Chinese laundryman, Sing Lee, died after being beaten and dragged in a noose by a crowd set on lynching him.

Others tried to stem the violence. A gambler named Jim Moon is said to have forced a crowd away from a laundry at gunpoint.  Madam Lizzie Preston offered sanctuary in her brothel on Holladay Street (now Market Street); Preston and her “girls” are said to have fought off the mob with shotguns, shoes, and champagne bottles. The city’s small police force was overwhelmed, and so authorities sent in the fire department, who turned their hoses on the rioters. Fireman Dave Cook, made acting chief of police on the spot, hastily assembled a force of 25 armed “special police”, who  managed to bring the riot to an end before midnight. Property damage from the riot was later estimated at $53,000 dollars.

Denver’s Chinese residents, placed in the city jail for their own protection, were kept there until November 4. Those rioters who were charged eventually had those charges dropped for lack of evidence, and Sing Lee’s killers were acquitted the following spring. The Chinese government demanded reparations for the loss of Chinese property, but none were made.

Nevertheless, Denver’s remaning Chinese citizens rebuilt and the population of Denver’s Chinatown reached a peak of approximately 980 in the 1890. But like other American Chinatowns of its day, it became a “bachelor society”, as restrictions on immigration prevented Chinese men from bringing wives or children to this country.  Chinese schools founded by the First Baptist Church and the Central Presbyterian Church provided English lessons for adults, not for a rising generation. The population of Denver’s Chinatown had dwindled to only a hundred or so by the 1940s, when the city demolished the remaining Chinese district along Wazee and Blake Streets in the name of urban renewal.