Located in El Paso's Concordia Cemetery is a plot that contains the graves of 64 members of the LDS/Mormon Church community, which lived in various tent cities and refuge centers in the city from 1912-1918. Over 4,500 Mormons came to El Paso as a result of being been driven from their homes in northern Mexico during the Mexican Revolution (1910-1920). By 1918, 10% of refugees made El Paso home. Adults (one person lived to be 107), children and stillborns were buried in the cemetery. Recently the LDS church dedicated the location of the plot place a marker where the graves are located.

Marker in Concordia on location of the 2-tiered plot 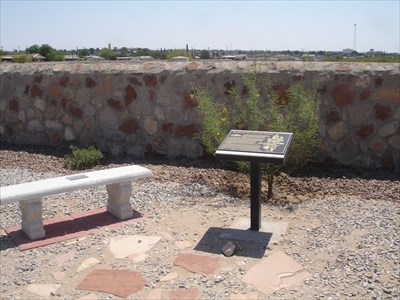 Close up shot of the marker 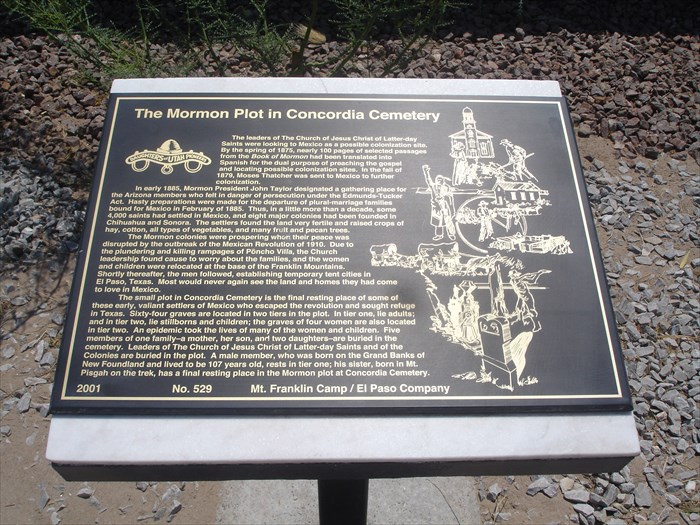 Mormons began settling in northern Mexico beginning in the late 1840s to escape persecution from the American government over the issue of polygamy. Over time they established hundreds of thriving communities. When the revolution broke out in 1910, the Mormons stayed neutral but the eventually the effects of the war were too great and they feared for their safety. Consequently they were forced to head northward, primarily through El Paso. The community there them and gave them the support they needed. Some of the Mormons returned to Mexico after the revolution but the majority moved elsewhere.