The Turkel House was constructed from 1955-1958 and is only house designed by famous architect Frank Lloyd Wright within Detroit’s city limits (1). It is also the only two-story example of a “Usonian automatic” home, a term inspired by the acronym for United States of North America, meaning that it was not influenced by other cultures (2). Wright’s Usonian designs were L-shaped with horizontal lines, and they utilized natural materials, natural light, flat roofs with overhangs, and heated floors. The Usonian design idea came out of the Great Depression of the 1930s, when there was a need for small, low-cost homes that were pre-fabricated (3). However, the much larger and opulent 4,300-square-foot Turkel House did not fit this mold exactly. 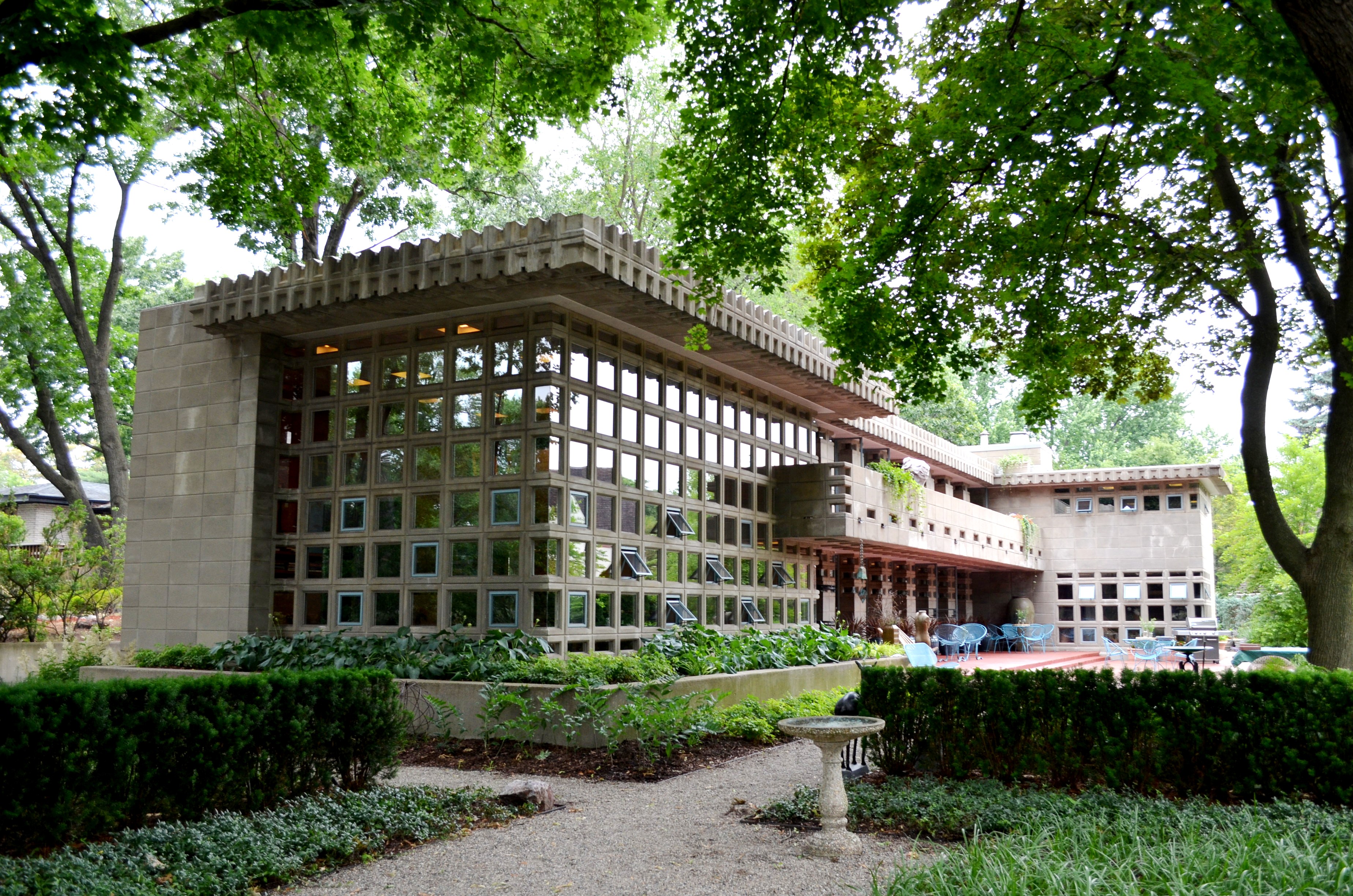 Lights on inside at dusk showcase the home's unique block windows 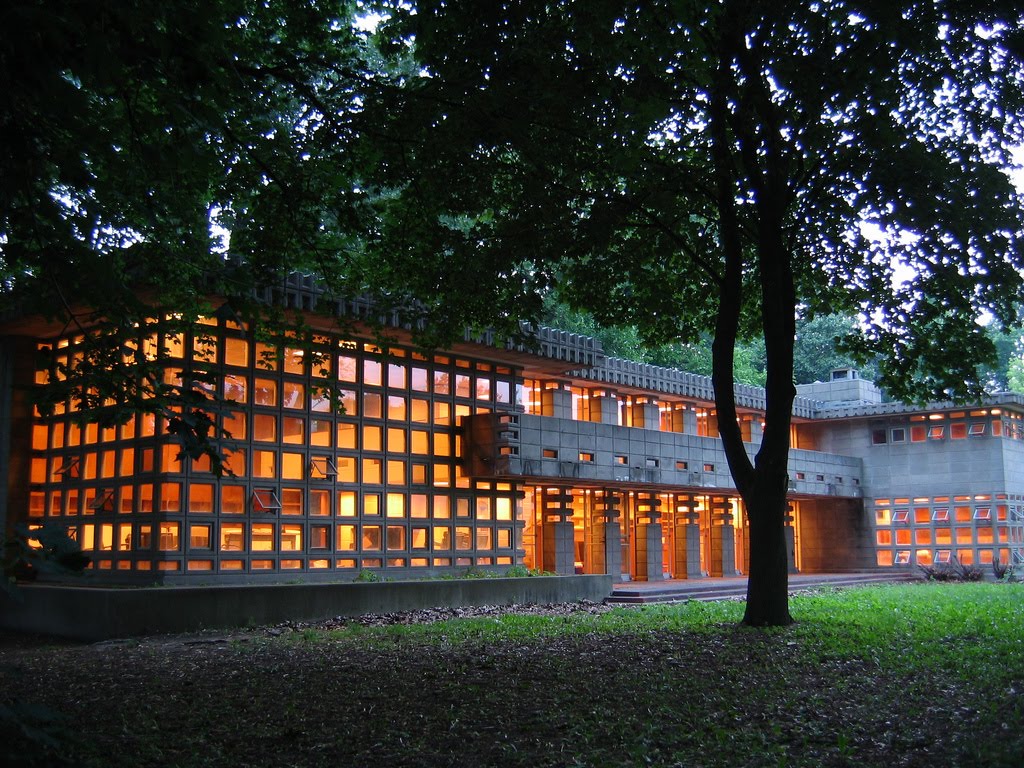 Inside the home's living room, called the "music room" by Wright 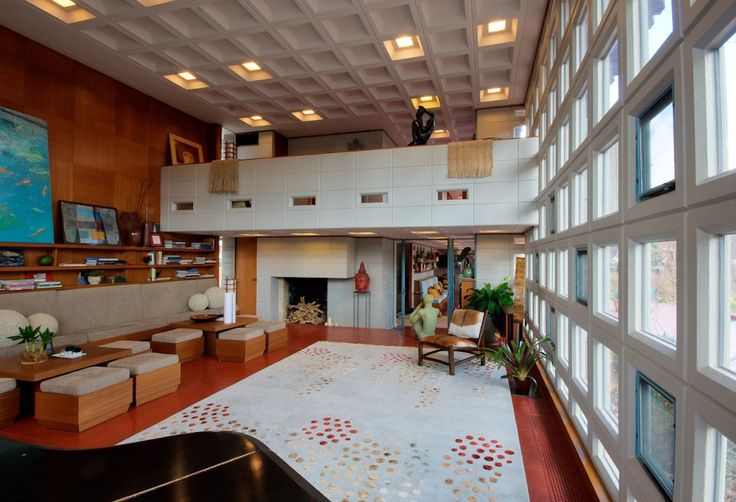 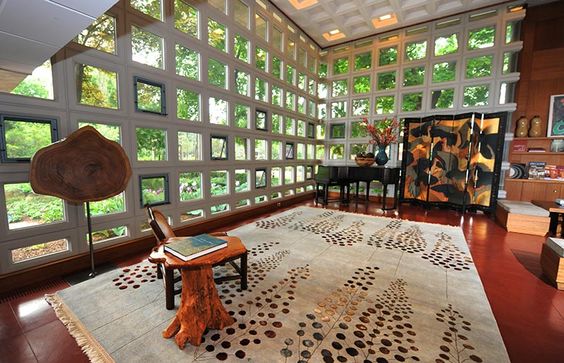 From the upstairs balcony overlooking the main living space 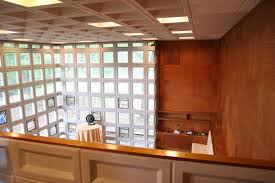 One of the bedrooms after renovation 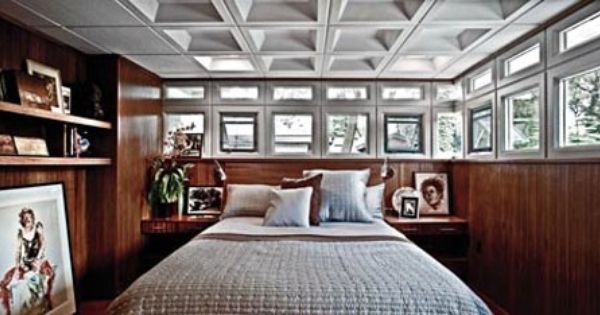 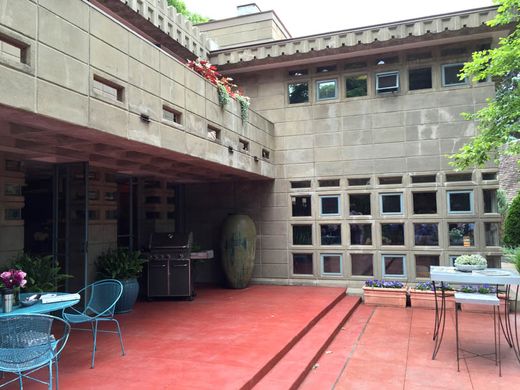 Compilation of photos during renovation 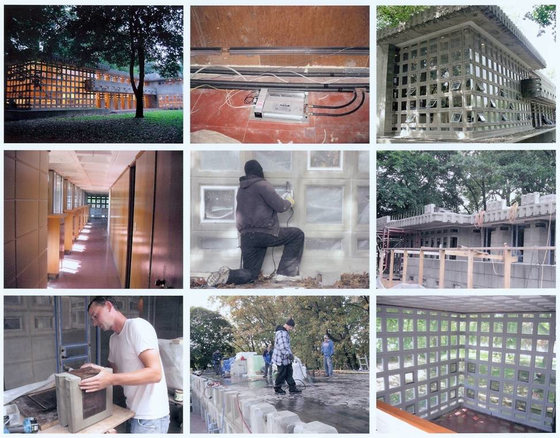 In 1954, Dorothy H. Turkel, who lived in the nearby Boston-Edison District, wrote to ask Frank Lloyd Wright to design a home for her in the Palmer Park neighborhood. Turkel was going through a divorce and wanted a new contemporary home for her four children.2 She was the wealthy heiress of her father, a man who had made his fortune in creating parking lots at a time when the automobile was taking off. The home cost about $65,000 to build (about $550,000 today).4

The Turkel House is made of concrete blocks which were formed on site.2 As described on the current owners’ website: “Many different block forms were required, including a special fascia block and a fascia corner block used only for that purpose. The living room, which Wright called a music room, is a full two stories in height and has pierced, light-admitting blocks on two sides, each 16 inches or two-thirds the 24-inch grid. Mrs. Turkel’s study, the master bedroom, and four other bedrooms, plus three bathrooms and a balcony fit over the lower level workspace, dining laundry, utility, and playroom plus exterior terrace in what was originally an in-line configuration. Six months into the planning Mrs. Turkel wrote to Wright saying she needed another bedroom.”5 Originally, the home also included an elevator and a unique radiant floor heating system. Wright made sure to integrate ducts and other technical aspects into his design without interrupting the clean lines.2 The home does not have an attic or basement.1 Typical of his homes, the interior originally had many built-in pieces and furniture designed by Wright.4

Turkel lived in the home until 1978, and then sold it to Loretta Benbow, who worked to include it on the State Register of Historic Sites in 1980. In the late 1980s, it was owned by Tom Monaghan (founder of Domino’s Pizza and owner of the Detroit Tigers), who commissioned the University of Detroit’s architectural school with its care. Architecture students lived in the home and gave tours, but it had already faced years of neglect, with a leaky roof and no maintenance done to its mechanical systems.2 Once the students moved out, the house was left vacant and vandalized for decades, deteriorating further. In 2006, it became the private residence of Norm Silk and Dale Morgan, floral boutique owners who have spent about $1 million restoring it.6