Kimball's Store operated as a dry goods store from 1915 until it closed in 2002; although part of the building has functioned as a paint store for Paint Perservatives and a coffee shop starting in 1964, when Kobuk began to rent from the Kimballs. It is the oldest commercial building in Anchorage. Since it's closing, Kimball's has been perserved and visitors can go on a short tour of the building. It was added to the National Register of Historic Places in 1986 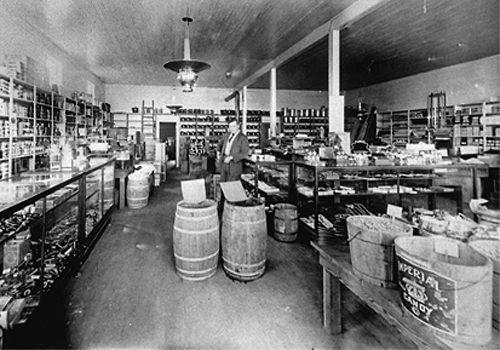 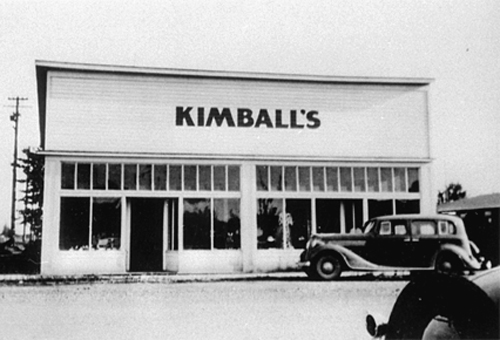 Irving L. Kimball, legendary fur trader and merchant in Pennsylvania and Oregon before moving to Alaska and starting a family. When Kimball's daughter, Decema, was born in 1906, Kimball was working at his own trading post that he opened in Seward, then Resurrection Bay1. Everything was going well until the Alaska Railroad Project went belly up and the economy and Seward slumped. This downturn forced the Kimballs to move to Latouch Island and start over. Irving again established a general store in 1907, but hardship struck again when his store was scorched from a fire in 1913; in addition, the Latouche Mine Commissionary was drawing customers away from their already struggling store1. The Kimball family would move one more time to Ship Creek, (present day Anchorage), Alaska, Irving would finally establish the Kimball's Store in 1915, after living in a tent in the rear of the lot with his wife and children2, and run it until his death in 19211.  The business succeeded in part because it was located in area that didn't have a lot of competition and in a central location for the customers to shop.  The store continued to sell "general merchandise," but would completely phase out the grocery store inventory in 1935 and peddle dry goods and hardware instead2.

In 1958, the late Irving Kimball's wife, Della, died and the children were left to run the store on their own. The decision was made to divide the building into two halves, literally: East and West. Kimball's store would stay in the Western half, while a paint company, Preservative Paints would occupy the Eastern Half. In 1996, The Kobuk Coffee Company would pay rent to lease the western facing storefront. In 1964 there was a severe earthquake in Anchorage that damaged many businesses and homes, but Kimball's was still left standing, unscathed3.

Decema Kimball-Anderson Slawson would pass away in 2002, resulting in the closure of Kimball's Store as a business4.  The Kobuck Coffee Company, now owned by the Bonito family since 1993, the same company that rented a third of the building in 1964 when Decema good friend, Patsy James, owned it, would purchase the building from the family in 20023. The building itself is protected from demolition or major alteration by the Anchorage City Charter1.