Built in 1926 and located along the famous River Walk, the historic Aztec Theater one of the most popular retail and entertainment centers in San Antonio. Originally, the multi-floored building hosted motion pictures as well as live shows. Thanks to a project completed in early 2016, the complex has been restored to its former glory featuring its original Meso-American architecture and decor. The building was listed on the National Register of Historic Places in 1992. 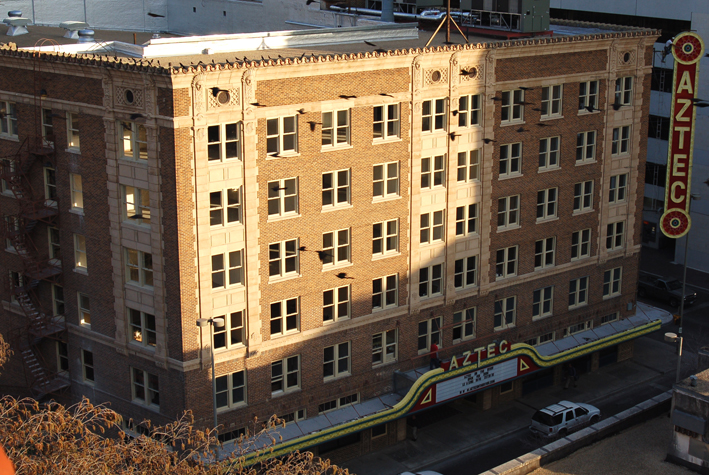 Boasting unique Meso-American architecture, the Aztec Theatre was constructed in 1926. It soon became known as one of the most grandiose and spectacular entertainment plazas around hosting a number of movie premieres as well as stage productions. Live shows included chorus girls, a 26-piece orchestra, and an 11-rank Robert Morton organ.

While the theater thrived for decades, by the 1970s the entertainment center experienced a decrease in popularity and revenue. Eventually, the building was divided into three auditoriums, but it wasn't enough to remedy the theatre's troubles, and it finally closed in 1984. In 1889, when there was talk of demolition, the San Antonio Conservation Society purchased the property. Fortunately, the theater was deservingly listed on the National Register of Historic Places in 1992.

After a grand restoration, designating the building as a multiplex with auditoriums, offices, special events spaces, and retail space, the Aztec has been reopened and is now one of the most-loved attractions on the San Antonio River Walk.