The Kirkwood House was the residence of George Atzerodt, a co-conspirator in the Abraham Lincoln assassination, and Andrew Johnson, Vice President of the United States when Lincoln was killed. Atzerodt’s role in the assassination was to kill VP Johnson at the same time that other conspirators killed their targets. Atzerodt bungled his assignment, resulting in his own execution and Johnson becoming the new president.

This is the current site where the Kirkwood once stood. The new building was part of a $40 million renovation in 2002. Its innovative "light pipe" lighting structure uses a prism, and at night it lights up in rainbow colors. 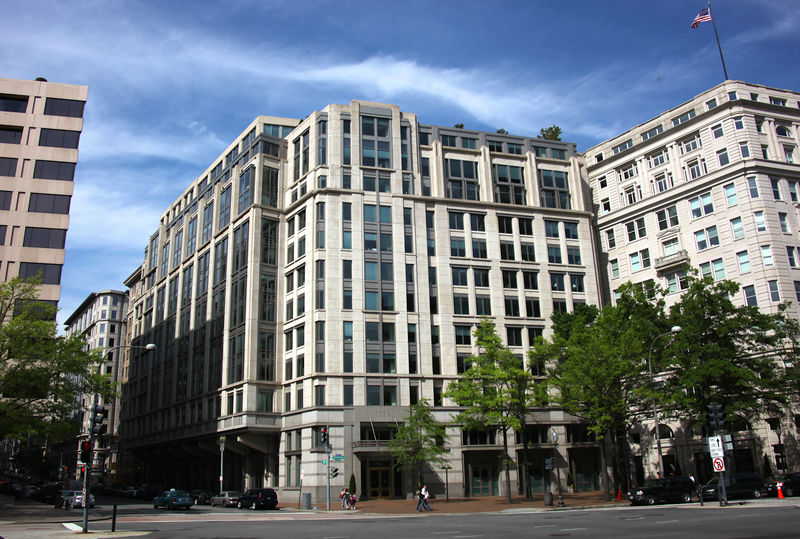 This is the Kirkwood House as it appeared shortly after Lincoln was assassinated. Atzerodt wasn't the killer Booth hoped he'd be, so Johnson lived to become the new president. 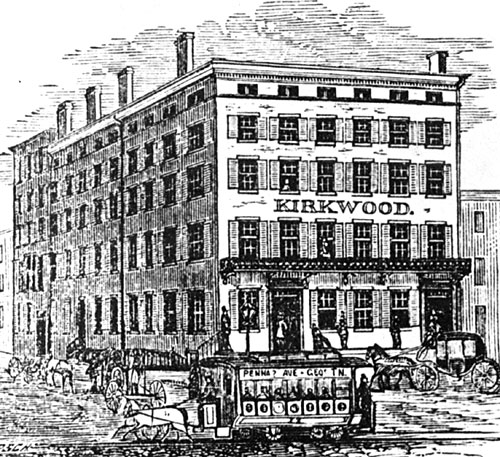 George Atzerodt (1835-1865) was a Prussian immigrant who ran a carriage repair business in Maryland.  During the Civil War he aided Confederate agents (rowing them across the Potomac River), including John Surratt (husband of co-conspirator Mary Surratt).  Atzerodt met John Wilkes Booth through their connections with the Surratts. Atzerodt, who was known as a “notorious coward,” confessed during his later trial that he originally agreed only to help Booth kidnap President Lincoln—also while watching a play--to exchange him for Confederate POWs.  At some point prior to April 14, 1865, Booth changed his plan from kidnaping to assassination.  Atzerodt was given the task of killing VP Johnson.  On the day of the murder, Atzerodt checked into room 126 of the Kirkwood House—under his own name—where Johnson lived.  The plan was for Atzerodt to kill Johnson, who was alone without guards, around 10 p.m. while Booth was killing Lincoln and conspirators Lewis Powell and David Herold were killing Secretary of State William H. Seward.  Atzerodt only got as far as the hotel bar, trying to work up his courage.  He spent the rest of the night presumably drunk and wandering the streets.  Atzerotd tipped his hand by asking too many questions about VP Johnson at the bar.  The next day, after Lincoln was dead, a hotel employee notified the police of a suspicious looking man and a search of his room turned up evidence pointing towards conspiracy:  a loaded pistol, a map, and John Wilkes Booth’s bank book.  Atzerotd was arrested six days later at his cousin’s house in Germantown, Maryland.  He was later convicted of conspiracy and then hanged.

As for Johnson, he went to bed early, around 10:15 p.m., but he was awakened by Leonard Farwell, former governor of Wisconsin.  The president was shot in the head and Seward was presumed dead (he was only wounded).  Johnson stayed in his room with guards outside until morning.  Around sunrise he briefly visited the Petersen House to visit Lincoln’s bedside and pay respects to the Lincoln family and then returned to his hotel.  The next day, at 10 a.m. at the Kirkwood House, Johnson was sworn in as the 17th President of the United States.

Over the next century, the site of the Kirkwood underwent numerous changes, razings, and rebuildings, including two different Raleigh Hotel buildings.  The current structure is part of a 2002 renovation that totally modernized the site, including innovative internal lighting by way of a “light pipe” with a 120-foot long prism. At night the light pipe is lit up with rainbow colors.  Although the Kirkwood House is long gone, its location remains a valuable part of the city’s Pennsylvania Avenue Historic Site.