This stunning, 3,000-foot long walkway stretches across the Missouri River, giving pedestrians a spectacular view of Omaha’s skyline and an almost airborne experience. On the Nebraska side, enjoy the 3-acre Omaha Plaza with an interactive water jet fountain, River Critters Environmental Play Area and access to the National Park Service Visitors Center. The bridge is connected to more than 150 miles of nature trails – visitors love to bike and walk on Bob. Enjoy live music in the Plaza area on Fridays during May and June. The plaza is surrounded by a large amphitheater-like grass seating. 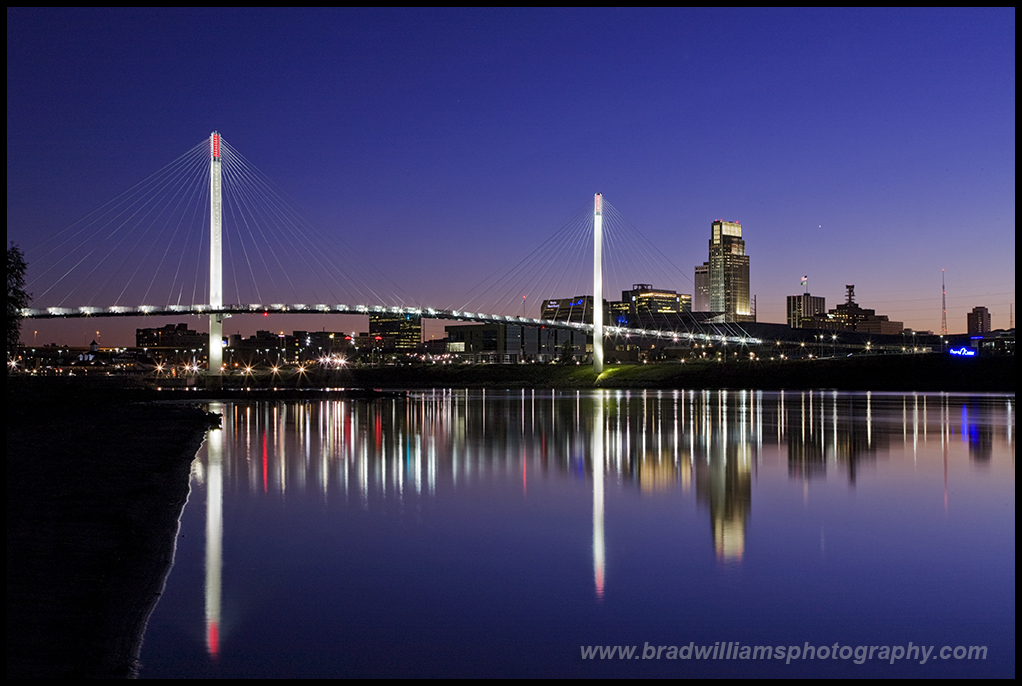 The Missouri River at Omaha has served many purposes, and the Bob Kerrey Pedestrian Bridge speaks volumes about modernity and the changing nature in which the Missouri serves humankind. The "Big Muddy" has transitioned from a place of fishing and canoe-type navigation for Native Americans and early American natives to an obstacle that had to be overcome in order to connect the Transcontinental Railroad to one of leisure and beauty; today the river is a place for fun. Moreover, it is not far from the "Old Market," which once existed as a place to gather and process cattle (stockyards), but now serves a place for fine dining, as well as stores, bars, and other places attached to the service-industry. In short, one bridge signifies a complete societal transformation.

Consider this diary from Sarah Royce, who traveled through the Omaha region in 1849 on the way to join the California gold rush. At that point, Omaha was barely a city and the Missouri River proved quite daunting for westward travelers.

After patiently waiting some days for our turn to cross the river, it came at last, and on Friday the 8th of June we ventured ourselves and our little all, on board a very uncertain looking ferryboat and were slowly conveyed across the turbid and unfriendly looking Missouri…From the place where we landed the ascent up the bluff was steep and dusty. Arriving at the top we were on an almost level plain, with only here and there a tree or two, though there was a body of timber a mile or two to the southwest. Not very far from the river, we began to see the few scattered buildings of Trader’s Point, the Indian Agency for this part of Nebraska Territory…That was my farewell to the fag-end of civilization on the Atlantic side of the continent. I saw no house from that time till we passed within view of the few dwellings at Fort Laramie.1

A mere twenty years later, Omaha was a burgeoning city and served as a hub to the Transcontinental Railroad, but the Missouri River proved problematic for they young city. In 1869, the Union Pacific Railroad ran ads proclaiming it could bring people from the East to California.2 The problem with that advertisement lay with the Missouri River. A message from Union Pacific to its stockholders in 1871 proclaimed their strong desire to build a bridge across the Missouri, but noted the technological challenges required to do so. From 1869 to 1873, no bridge existed that could allow a train to cross the river. Instead, tracks were laid onto the river when it was frozen or, during the warmer months, ferries were used. For the Union Pacific, a bridge across the river into Omaha opened more than the West, it served as a bridge to the Asia (for trade).3 Finally, by 1873, the bridge work was completed and Omaha became a legitimate train center, no longer hampered by its location on the west side of the Missouri. The arrival of the train and the construction of the bridge effectively closed the chapter on Omaha’s competition with its rival cities and allowed Omaha to grow substantially as the region's biggest urban center.  Simply put, “It is sweet to be the railroad’s friend."4

Over time, more bridges would be constructed, first for trains, and then for automobiles, and finally today for pedestrians and bicyclists. The bridge is also a demonstration of engineering history. While 19th century engineers found crossing the Missouri to be a daunting endeavor, the Bob Kerry pedestrian bridge spans 3,000 feet yet is held only by cables. Each bridge signifies the change in society and culture, both in Omaha and throughout the world during industrial and post-industrial eras.

A little about the man for whom the bridge is named - Joseph Robert "Bob" Kerrey:

1 Sarah Royce, A Frontier Lady: Recollections of the Gold Rush and Early California, ed. Ralph Henry Gabriel (New Haven, CT: Yale University Press, 1932), 9-10. 2. Images of those ads can be found online in several locations. One example is located at http://imgc.allpostersimages.com/images/P-473-488-90/29/2943/6JKRD00Z/posters/union-pacific-railroad-poster-advertising-first-transcontinental-railroad-across-the-usa-c-1869.jpg . 3 “Report to the Stockholders of the Union Pacific Railroad”, (Boston, 1871). http://www.cprr.org/Museum/Reports/pictures/capture_00306.html; In addition, the document championed their use of Chinese immigrants. The Chinese worked long hours and in severe conditions without much reward. The advantage of using Chinese laborers involved saving money which was put towards the expense of bridge construction. See,for example, Ronald. A Takaki, A Different Mirror: A History of Multicultural America (New York: Little, Brown and Company. 2008). 78, 182. 4 George Leighton, Five Cities: The Story of Their Youth and Old Age (New York: Harper and Brothers Publishers, 1939), 169.