The First Battle of Winchester

One of several markers related to this historic 1862 Civil War battle, this plaque shows the location where Confederate troops began their advance towards the Union's position which was near present-day Handley High. The Confederate victory was a turning point during the Valley Campaign of 1862. In this campaign, General Thomas "Stonewall" Jackson was tasked with taking pressure off the Confederate capital of Richmond, Virginia. As a result, Jackson and 17,000 men started moving and were pursued by Union General Nathaniel Banks with 10,000 soldiers who were charged with slowing or stopping Jackson's force. On May 25, 1862, Jackson and Banks troops collided and began the First Battle of Winchester. 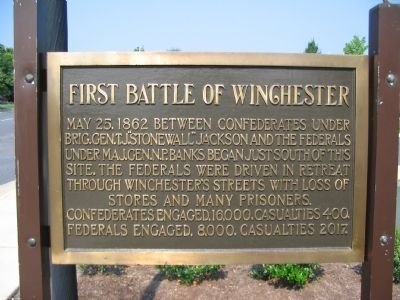 Maj. Gen. Nathaniel Banks ordered his troops to retreat to Valley Pike, unsure of the location of the Confederate army Banks needed a more defensible position. while retreating the union forces clashed with the rebels and lost men and supplies. After arriving at Banks ordered his men to prepare fighting positions and brace for an attack in an attempt to halt or delay Jackson`s advance, to aid in this Banks placed his artillery to defend his lines.

On the 24th of May Jackson began a frontal attack while General Ewell attacked the left flank of the union lines. Their attacks pushed the center of the union lines back but they did not break due to supporting fire from the artillery. However Ewell`s attack broke through the union lines forcing them to fallback. With the ground he gained Jackson advanced his artillery to a position from which they could fire on the union guns placed on Bower`s Hill. After repositioning his Jackson ordered them to fire on the union position. When Banks realized his cannons were in danger he ordered his men to attempt to silence the Confederate guns by killing their crews, when this was unsuccessful he ordered his artillery to fire on the Confederate position in a final attempt to silence the guns. when this failed Banks moved his cannons to a position from which they would be safer from the Confederate fire. As his artillery dueled with that of the union Jackson ordered the rest of his cannons to move to the position of the first set.With the reinforcement of his artillery Jackson was able to break the union like and force them to retreat into the city.