Pursuit of Lincoln assassin John Wilkes Booth could have ended at the capital city limits if the man guarding the Navy Yard Bridge had simply followed orders. Instead, Booth escaped the city to lead Union forces on a 12-day chase across Maryland into Virginia.

Picture of the Navy Yard Bridge taken in 1862 by Mathew Brady. Booth had to do some fast talking to get past the Union guard before he could safely exit the capital after killing President Lincoln. 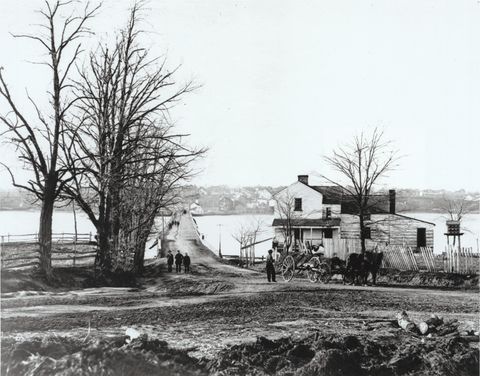 April 14, 1865:  With President Abraham Lincoln fatally wounded behind him, John Wilkes Booth fled Ford’s Theatre, mounted his horse, and raced out of the capital.  His exit route took him to the Navy Yard Bridge at the foot of 11th Street.  If Booth could get past the guard, he could cross the bridge spanning Anacostia creek and head south towards Virginia.  Booth arrived at the bridge at about 10:30 p.m.  A sentry named Silas Cobb demanded he stop and give his name, because the bridge was closed at 9 p.m. for security reasons. Booth gave his real name and the password “TB” (Tobacco Road).  After further interrogation, Booth was allowed to cross.  Booth was lucky.  He had already been stopped for suspicion (he lacked proper identification) and held at this bridge earlier that day.  The supervisor let him go and so Booth entered the capital and carried out his assassination plot against the President.

Booth’s co-conspirator David Herold, whose attempt to kill Secretary of State William Seward caused only serious wounds, arrived at the bridge minutes later.  Herold was allowed to pass without incident.  A third horseman, John Fletcher arrived soon after Herold, but did not cross the bridge.  Fletcher was pursuing Herold to recover the rented horse he rode.  However, when Cobb informed Fletcher he could cross the bridge but would not be allowed to re-cross until morning, Fletcher ended his pursuit.   The capture of Booth could have happened within a day if sentry Cobb had followed his orders.  That order was General Order #5, issued January 24, 1863, saying:  "No person excepting General Officers will be passed over any of the several crossings between the hours of 9:00 P.M. and daylight without the countersign and a pass.”  It was ninety minutes past 9 p.m., only one had the countersign, and none had a pass.

After crossing the Navy Yard Bridge minutes apart, the two fugitives passed through Uniontown (now Anacostia) and met up later at Soper’s Hill.  From there, they traveled together.  They next stopped shortly at the Surratt’s Tavern for weapons and supplies.  By midnight they were in flight again.  After 12 days, two rivers crossed, numerous houses visited, 5 days hiding in the woods, and Union soldiers on their heels, the two men were finally brought to justice at Garrett’s farm, where Herold was arrested and Booth was killed.

The Navy Yard Bridge connected Washington, D.C. to Uniontown (now Anacostia), Maryland.  Uniontown was part of an 1850s development of numerous suburbs by land speculators.  A developer built the town in 1854 to attract employees of the Navy Yard who could live in his town and walk across the bridge to work.