Located along the Chesapeake and Ohio Canal, these historical markers share the history of Shepherdstown and its role in the Civil War. The marker of the left offers a general history of Shepherdstown from its Native inhabitants and growth as a stop along the C&O Canal to the history of the town during the Civil War. The marker on the right offers a detailed history of the 1964 Confederate raid of Jubal A. Early. Early's men crossed Blackford's Ford near this marker as part of the Confederacy's third and final attempt to invade Maryland. Although Early's raid led the Union to send troops to the area, it did not significantly alter the Union's offensive in Virginia as Confederate leaders had hoped. 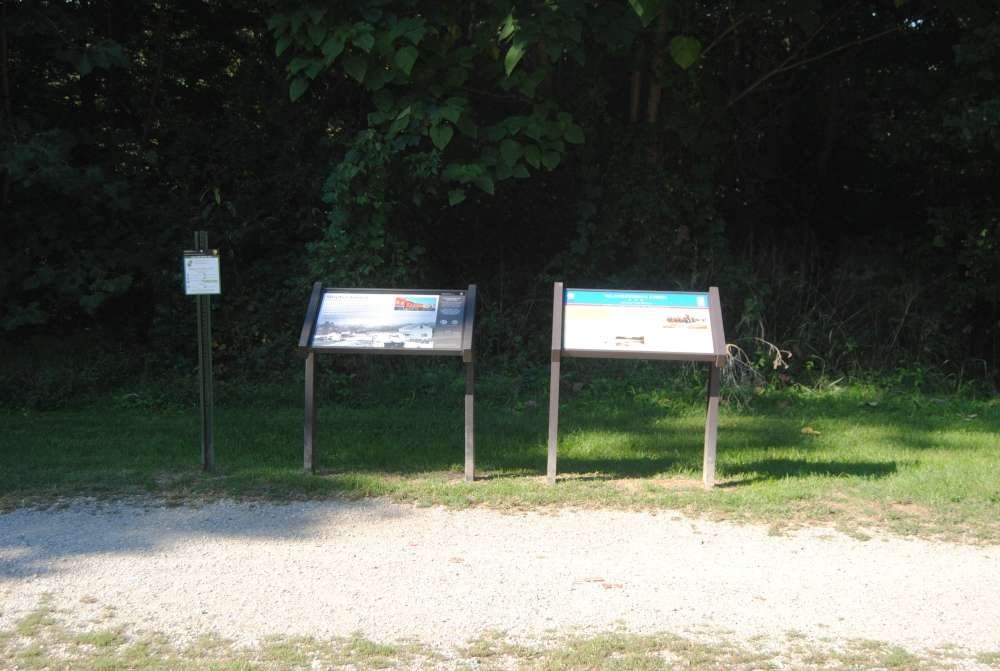 Shepherdstown's location on the C & O Canal led to its growth after 1832. This area became an important location for the Confederacy, which crossed into Maryland during three major military operations including the Antietam campaign in 1862.The Battle of Shepherdstown was the bloodiest battle ever fought in what is now West Virginia and it occurred in this area between September 19-20, 1862. That battle resulted in a Confederate victory, though both sides suffered heavy losses. The outcome signaled the end of the Maryland Campaign and, with the Confederate troops driven from Union soil, President Abraham Lincoln issued the Preliminary Emancipation Proclamation on September 22, 1862.

As the final battle of the Maryland Campaign, the 1862 Battle of Shepherdstown may have significantly changed the course of the American Civil War. The Maryland Campaign of the Army of Northern Virginia is generally acknowledged as the turning point of the war and  involved three battles: South Mountain, Antietam, and Shepherdstown. Undertaken in early September, 1862, the objective of the campaign was to win over the citizens of Maryland to the Confederate cause, and to win a military engagement in the north. The south hoped such a victory would convince the governments of England and France to recognize the legitimacy of the Confederacy.1

Following the bloody Battle of Antietam, the Army of Northern Virginia retreated across the Potomac River via Boteler's Ford, located a mile east of Shepherdstown. General Lee assigned Major General Pendleton to cover the retreat, leaving behind 35 pieces of artillery and infantry troops on the river's southern shore. The artillery was stationed on bluffs overlooking the ford and nearby dam. The retreat was completed by mid-afternoon on September 19th.

General Lee intended to re-enter Maryland at Williamsport to continue the campaign. However, by the next morning, a detachment of General Fitz-John Porter's V Corps attacked the Confederate rearguard and captured several pieces of artillery. Porter sent units from two divisions across the river to establish a bridgehead. The actions prompted Hill's division to counterattack, inflicting devastating casualties on the 118th Pennsylvania "Corn Exchange" Regiment. Consequently, the Federalists did not pursue. The failure by McClellan to follow the retreating Confederate army resulted in his subsequent dismissal by President Lincoln.

This Battle is notable for being the bloodiest conflict in what is now West Virginia, with 366 Union casualties (73 killed, 163 wounded, 132 captured/missing), and 307 (36 killed, 267 wounded, 6 captured/missing) on the Confederate side.

The marker on the right discusses the third and final attempt of the Confederacy to cross into Maryland at this location. In 1864, Early invaded Maryland with plans to attack communities between this location and Washington in hopes of drawing Union troops from their assault on Richmond to this area in order to release pressure on Lee's Army of Northern Virginia. Owing to the size of the Union army by this time, Early's campaign had little effect and his men soon found themselves retreating from the federals in the Shenandoah Valley.