This andesite butte is of volcanic origin and located on Arizona State University's Tempe campus. Locals often refer to the butte as "A Mountain," a reference to the 60-foot-tall gold-painted letter 'A' that is made of rock and located near the top of the butte. Another name for the area, used by the City of Tempe, is Hayden Butte. The highest point of Tempe Butte stands at 1,398 feet in elevation, while its base is at approximately 1,150 feet in elevation. Tempe Butte is most often seen as the backdrop to games held in nearby Sun Devil Stadium. 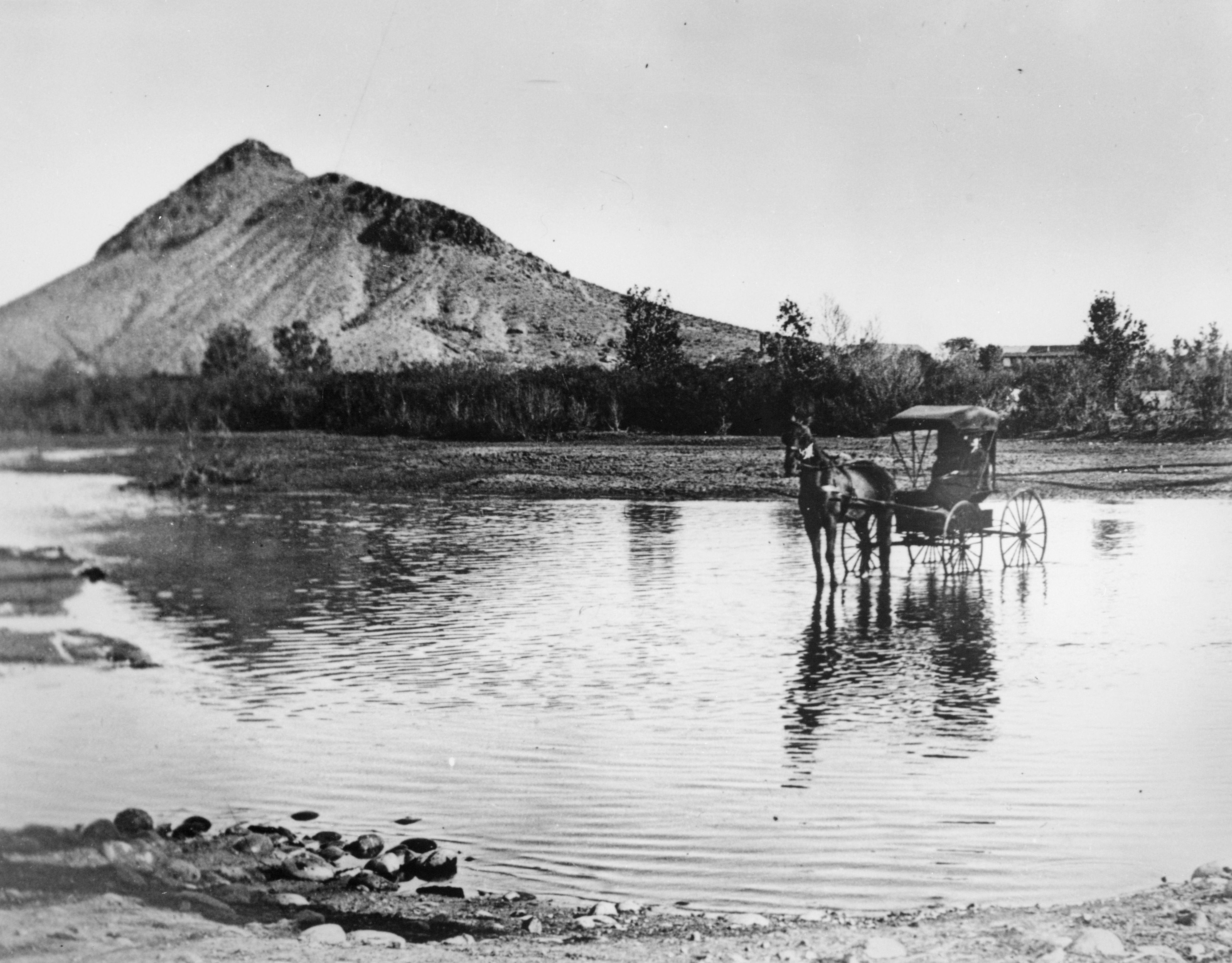 up close photo of the A 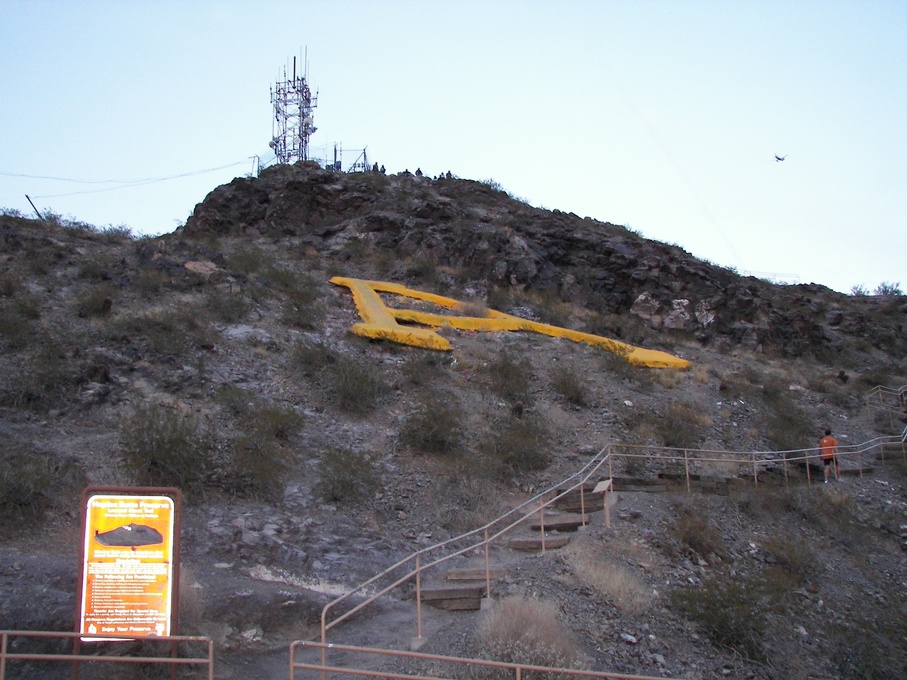 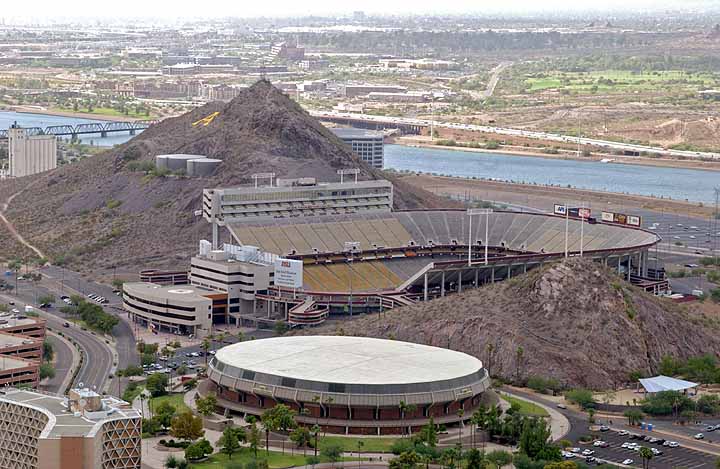 Originally, Tempe Butte was part of a series of horizontal layers, but the strata has been tilted associated with the formation of South Mountain, and millennia of erosion has created the distinctive hogback of resistant andesite, over sedimentary deposits and rhyolite beds.

Despite intensive development, the butte and its immediate surroundings continue to support a variety of native vegetation, including saguaro, Buckhorn Cholla, barrel cactus, creosote bush, palo verde, and mesquite. Native wildlife include jackrabbits, and small desert-adapted species such as pack rats.

Signs of early habitation by the Hohokam people have been found on Tempe Butte, including petroglyphs, pot shards, scrapers, and metate. The area just west of the butte would be settled by the 1870s in an area first known as Hayden's Ferry, then a major crossing for the Salt River which flows just north of the butte. The proximity of the community to the butte prompted Darrell Duppa to fancifully compare the area to the Vale of Tempe near Mount Olympus in Greece; therefore, the town was given its present name. The remains of the Hayden Flour Mill (which lends its name to main thoroughfare Mill Avenue) still stand near the western edge of the butte.

More recent alterations include two water tanks on the south flank of the butte, and several trails, at least one paved, to provide access to man-made structures. The east side of the butte was partially excavated in order to accommodate the construction of Sun Devil Stadium in 1958. A 50-foot-tall radio tower was built on the top of the mountain in 1962 for the Salt River Project.

Recent development along the adjacent stretch of the Salt River (which has been dammed to form Tempe Town Lake) has prompted several grassroots movements to preserve the butte from further environmental damage.

Originally, the letter on Tempe Butte was an 'N', built by Tempe Normal School's class of 1918. The school changed its name to Tempe State Teacher's College in 1925, and the 'N' was adapted into a 'T'. Subsequently, three years later, the school would change its name again to Arizona State Teacher's College, but the letter 'A' would not appear on Tempe Butte until 1938. This 'A' was destroyed by a bomb blast in 1952, prompting the construction of the current 'A' in 1955. The letter is made from reinforced steel and concrete, and is an external structure rather than being carved into the mountain or whitewashed directly on the rock.

Due to the existence of an "A Mountain" for the University of Arizona (Sentinel Peak), students from these rival schools often attempt to paint the other's 'A' in their school colors. Guarding the A is an annual ritual in the week leading up to the annual ASU-UA football game, the Territorial Cup. The A has been painted in other colors for various causes, and is painted white at the beginning of each school year, but is usually painted Gold, one of ASU's school colors. Most recently, UA students painted the A blue and white following Arizona's victory in the 2011 Duel in the Desert. The A has also been painted colors by other schools, such as green by Oregon Ducks fans and purple by Grand Canyon University fans

Explore the history of downtown Tempe.