Fort Ward, the best preserved fort from the system of Union forts and batteries, was built to protect Washington, D.C. during the American Civil War. It was the fifth largest fort built to defend the capitol. The Fort Ward Museum interprets the site's history and offers exhibits on Civil War topics, education and interpretive programs, tours, lecture and video series, bus tours, and living history activities throughout the year. The Museum and Historic Site also cover the topic of Alexandria, Virginia as an occupied city, the city's role as a vital Union Army crossroads, life within the Defenses of Washington, and the everyday life of Civil War soldiers and civilians. 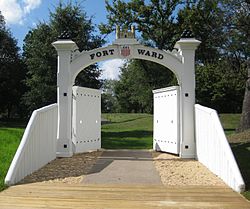 A demonstration of artillery firing at Ford Ward Museum 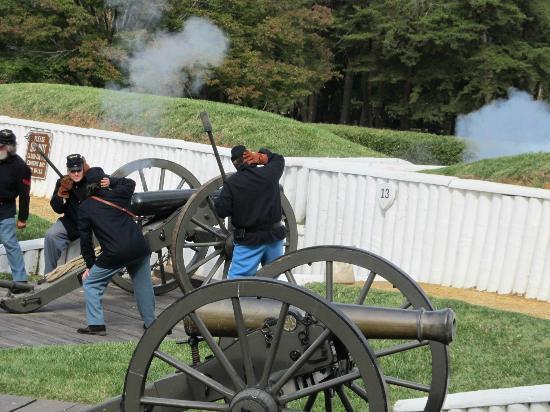 Following the Battle of Bull Run, Major General George B. McClellan assumed command of the military district of Washington. Upon his arrival, he noted the inadequate condition of the city's defenses. Consequently, McClellan issued the order to expand the defensive capabilities of the city via the construction of forts and entrenchments.

Fort Ward, named for the first naval Union officer to die in the Civil War (James Harmon Ward), originally had a perimeter of 540 yards. It also included platforms for 24 guns and, later, a 100 lb Parrott gun. Owing to the vulnerability of the fort, the result of such large artillery, the perimeter was expanded to 818 yards and more guns added. General John Newton supervised the construction, and liberated slaves, "contrabands," helped build the defenses. The fort never saw any attacks and was dismantled in 1865.

Fort Ward provides visitors and tourists with an understanding of Civil War era military engineering. Approximately 90-95% of the fort's original walls are preserved, although erosion continues to affect the site. The Northwest Bastion has been restored return it to its 1864 condition.

Part of a 45 acre historic area, the Fort Ward Museum and Historic Site includes a museum, an Officer’s Hut, a Ceremonial Gate, and the reconstructed northwest bastion. The Museum displays information about the battles that took place in the area and the technology that was employed during those battles.

Fort Ward also preserves the history of individual soldiers and families from the area. Special exhibits include information on the quality of life for African Americans before and after Civil War. Many of the artifacts are from on archaeological evidence found on battle sites and plantations throughout the area. The Museum also offers living history reenactments that give a broader understanding of battle during the period. There are many special events and exhibitions held at Fort Ward, which help tell the story of Alexandria's Civil War involvement.

The museum houses both rotating and permanent exhibits. Its permanent exhibits include "The Common Solider," "The Art of the Artilleryman," and "Medical Care for the Civil War Soldier." Self-guided tours for the fort itself begin at reconstructed Fort Ward entrance gate, and details about the Bastion's guns are available from informative signage.