The Broken Spoke is today one of Austin's oldest and most famous dance halls. Opened by James White in 1964, it has hosted such famous names as Bob Wills, Willie Nelson, and George Strait. The venue continues to serve as an intimate setting for listening to honky-tonk music and dancing, providing Austinites and visitors alike with a taste of a lifestyle rapidly vanishing amidst the city's expanding urban environment. 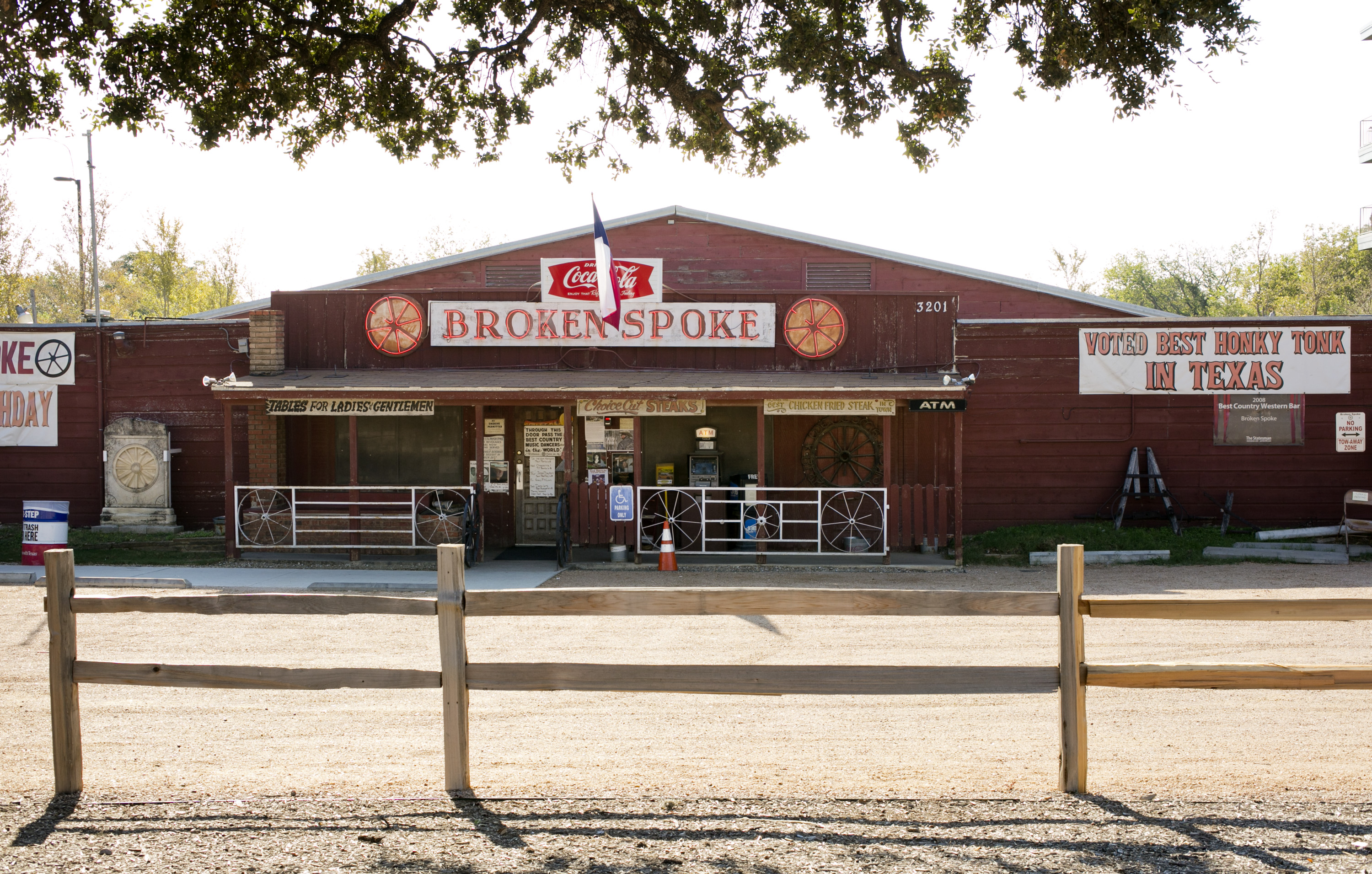 After graduating high school, James White left his Texan roots behind to work with his father in aircraft and missile factories in California.  Following his stint in the factories, White joined the Army, served for about a year, but later returned to his hometown of Austin, Texas to open a down home, country cafe in 1964.  White jokes that he “[has] come a long way in life. [He] was born about a mile down the road and only made it this far”.  His business was not immediately successful, but he began inviting local country artists to play, ultimately creating his ideal Texas dance hall.  Shortly after opening his business, he met a woman who became his chef and later his wife.  Together, they created the Broken Spoke as we know it today.

Surprisingly enough, the Broken Spoke originated simply as a cafe with gingham-covered picnic tables, jukeboxes, serving country classics, like chicken fried steak and fried okra, and cheap drinks.   However, after customers “started dancing to music from the jukebox, White moved the pool tables and added more room”, thus instituting the honky-tonk dance hall we all know and love. The Broken Spoke became a monumental venue during the ‘60s for country and folk artists across the nation, with bands such as Bob Wills & the Texas Playboys, Asleep at the Wheel, George Strait and a plethora of other well-known country/folk acts.  During the ‘70s, The Broken spoke acted as a sort of haven, not only for up and coming local music acts, but also folk singers on the fringe of mainstream country music, like Willie Nelson and Kris Kristofferson.  Willie Nelson played at the Broken Spoke well before his career matured, and still considers it his go-to bar when in Austin. Consequently, The Broken Spoke remains one of the only true honky-tonk dance halls in Texas, and will hopefully stay that way.  White claims that “[he] can stay here as long as [he] want[s] to and if anything ever happened to [him or his wife], [his] daughters Ginny and Terri are here also.”  Despite the inevitable gentrification of South Lamar, White’s bar continues to thrive as a casual, country dance hall amongst the grandiose apartments, new restaurants and shops constantly being constructed, famously stating “The Broken Spoke ain’t fancy, but it sure is country”.  Owner James White himself is an historical figure, making appearances in his signature button down, cowboy boots and hat on weekend nights.  He aims to keep The Broken Spoke a two-stepping staple in Austin, even with the influx of population and continual growth of businesses, with help from sympathizing Austinites.  Real estate agent Ty Puckett has lived in Austin since the ‘60s and claims he has “been here 40 years and seen too many great spots that made Austin Austin get torn down”.  He has worked directly with White, as well as encouraging the company for whom he works, Transwestern, in hopes of salvaging the last remaining semblances of old, hippie Austin.

The Broken Spoke will hopefully remain an historical site as Austin continues to change culturally, pushing out institutions that had previously defined the city. As drastically as Austin has changed throughout the years, patrons who have been going to the Spoke since the ‘60s claim it has not changed a bit and many compare its historical significance in Texas to the fame of the Alamo.  White likes to tell a story about Texas legend, Davy Crockett: "yeah, old Davy came through here on his way to fight at the Alamo and he liked what he saw. He said, 'James, don't change a thing 'til I get back.'Well poor ole Davy never made it back so we ain't changing nothin!"  Remember The Broken Spoke!