Hawai‘i State Foundation on Culture and the Arts

The Hawai‘i State Foundation on Culture and the Arts was created in 1965 by the Hawai'i State Legislature to promote, preserve, and importantly encourage the arts and culture. To this end it offers classes, and cultural backgrounds, as well as hosting a museum with so much history and information to offer on the people of Hawai'i.

A look from the outside of the facility with its colorful lights. 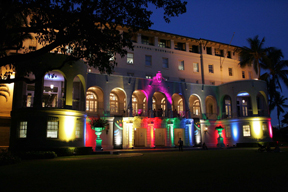 Artwork that is in the museum located within the building. 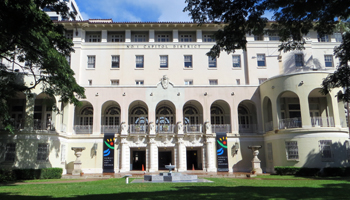 The establishment of the foundation enabled the state to apply for and receive federal grants straight from the National Endowment for the Arts. The very first member and chairperson was Pundy Yokouchi. At first it was put in the office of the governor and was actually located in the Princess Victoria Kamamalu Building in Honolulu. They even originally had a grant program that enabled millions of funds so that the arts program could grow and cultural programs could thrive statewide.

In 1967 the first the program in the nation that established Art in public places was created by legislature, and it was within the Hawai‘i State Foundation on Culture and the Arts. Then the foundation alongside the state department of education made the Artists in the schools program and that let students that were in kindergarten - 12th grade to not only see professional artists work but work with them, in 1970. In 1980 the state legislature got rid of the History and Humanities area of the foundation but then another was created because it to take over some of the old state humanities agency tasks and duties.

In 1883 the Folks art program was started from a grant and it helped to promote the more traditional folk arts that were all throughout Hawai'i. After that other program began to fall in place year after year by the legislation because they felt it all was necessary in order for this foundation to be whole. That is when in the fall of 2002 they opened the museum that is on the second floor of the building, and it has art from a collection titled the public places collection, and has three galleries from that alone.