Located next to Makalapa Park and within walking distance of the famed USS Arizona Memorial, the museum is dedicated to preserving the USS Bowfin and interpreting the history of this and other submarine-related artifacts from the WWII period. The Bowfin was launched on December 7, 1942, exactly one year after the attack on Pearl Harbor, leading to the Bowfin's nickname of the "Pearl Harbor Avenger." The museum's collection includes recruiting posters, battle flags, a one-of-a-kind cutaway of a Poseidon ballistic missile, an authentic Japanese Kaiten (a suicide sub similar in concept to the Kamikaze aircraft), and the intact conning tower and periscope of the USS Parche, a contemporary of the Bowfin's and one of the most decorated World War II-era subs in the Pacific Fleet. Thousands pay their respects at the Park's Waterfront Memorial, which is in tribute to the 52 American submarines lost during the war. The museum opened in 1981 after years of planning and restoration of the Bowfin. In 1989, the Pacific Submarine Museum closed and transferred its collection to the USS Bowfin Museum.

The USS Bowfin at her present berth in Hawaii. The submarine has been docked there since 1980. 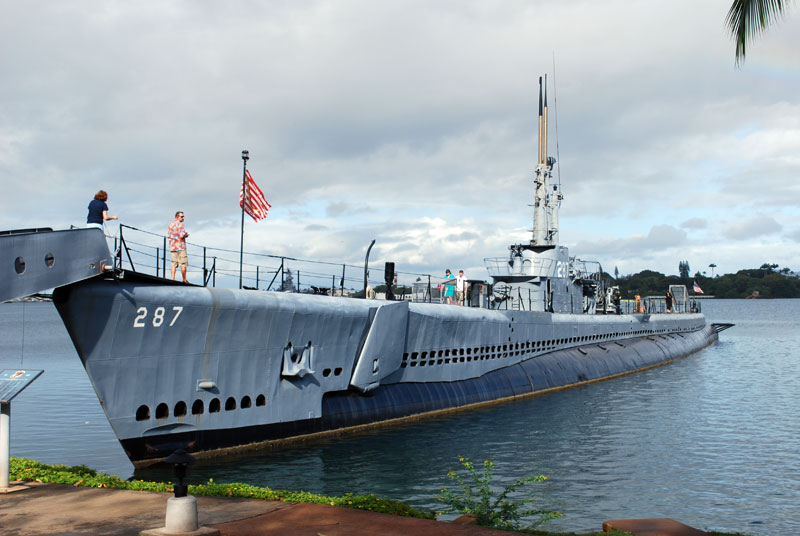 Bowfin is a Balao-class submarine. Balao subs formed the backbone of the US Pacific Fleet during World War 2. Reliable and well-designed, many served as training vessels for decades. 8 currently serve as museum ships around the US.

Bowfin on her fifth war patrol in 1944. This patrol saw her worst "luck," and she was not credited with a single kill. After weeks without sighting an enemy, she was severely depth-charged after unsuccessfully attacking an enemy convoy. 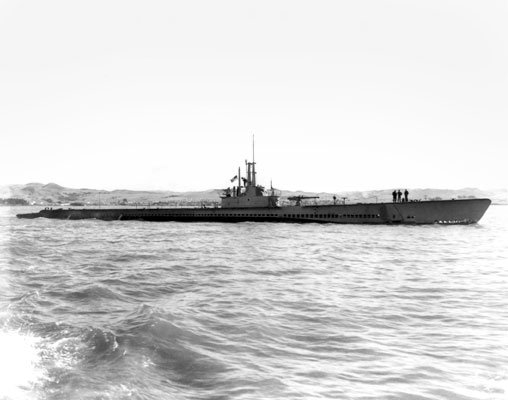 The deck of the USS Bowfin at her launching ceremony. Launched on the 1-year anniversary of the Japanese attack on Pearl Harbor, she was dubbed the "Pearl Harbor Avenger." 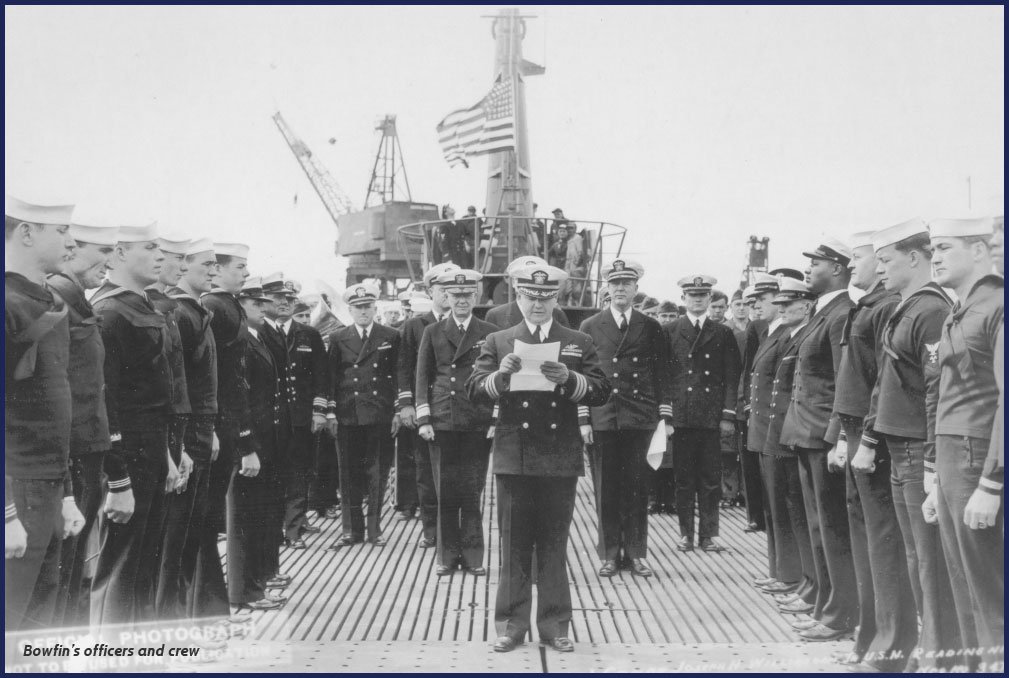 Admiral Charles Lockwood, who succeeded to the command of American submarines in the Pacific in 1943 and is widely credited with the strategic success of the submarine service in the Pacific. 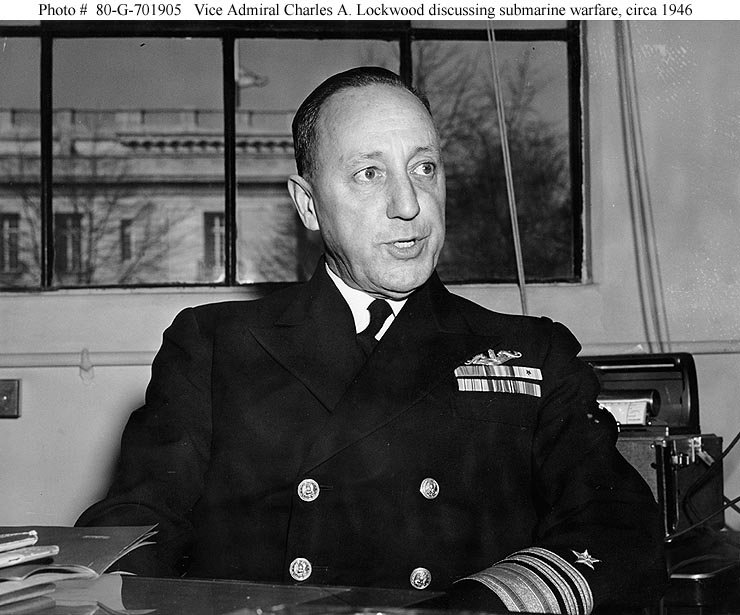 Admiral Ralph Christie, one of the inventors of the flawed Mark 6 exploder in the Mark 14 torpedo and later in command of submarine operations in the South Pacific. He accompanied the Bowfin's third patrol in person for 29 days. 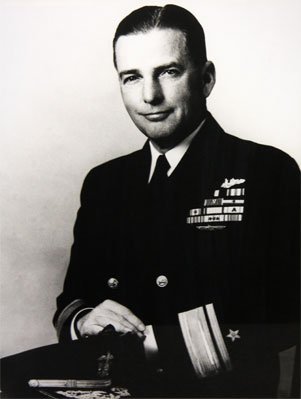 Breaking ground for the Bowfin's new berth as a museum in Pearl Harbor, Hawaii, in 1980. 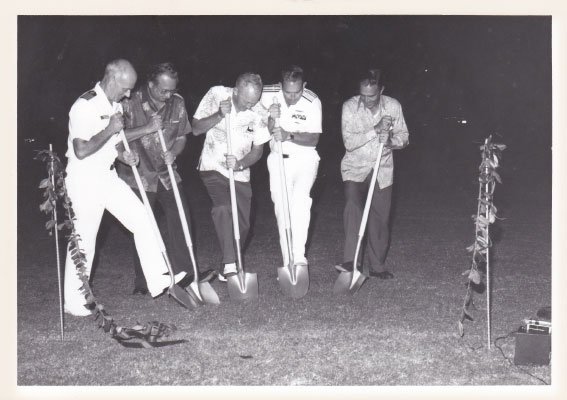 Though fundamentally sound, the Mark 14 torpedo used aboard US subs contained several flaws that were not caught prior to service due to inadequate testing. Only after many months, "duds," and premature explosions were the issues resolved.

A 2014 ceremony honoring the 834 children killed aboard the Tsushima Maru. The unmarked vessel was sunk by the Bowfin in 1944. Bowfin's crew did not know of the vessel's precious human cargo until 20 years later. 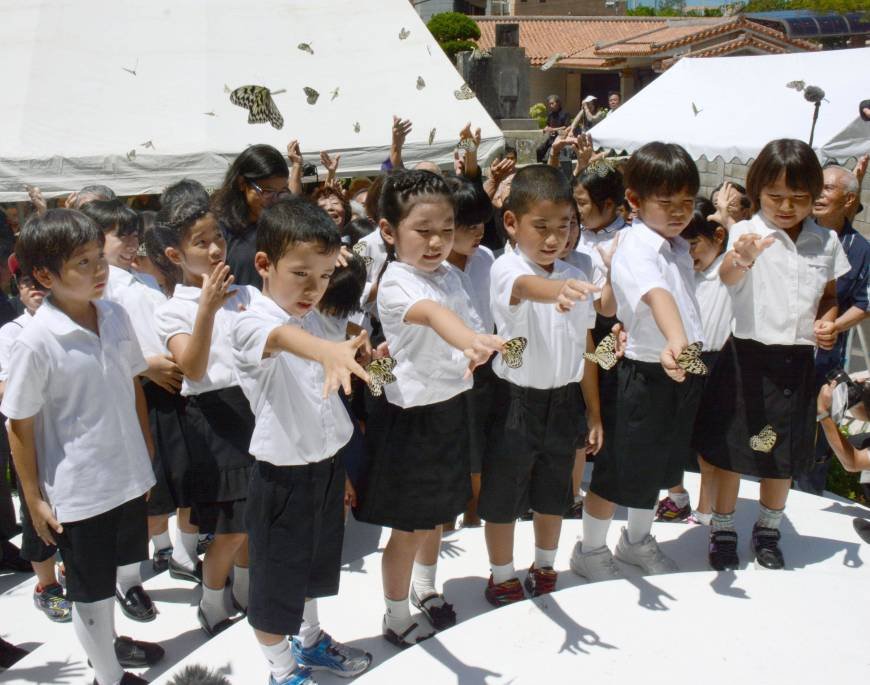 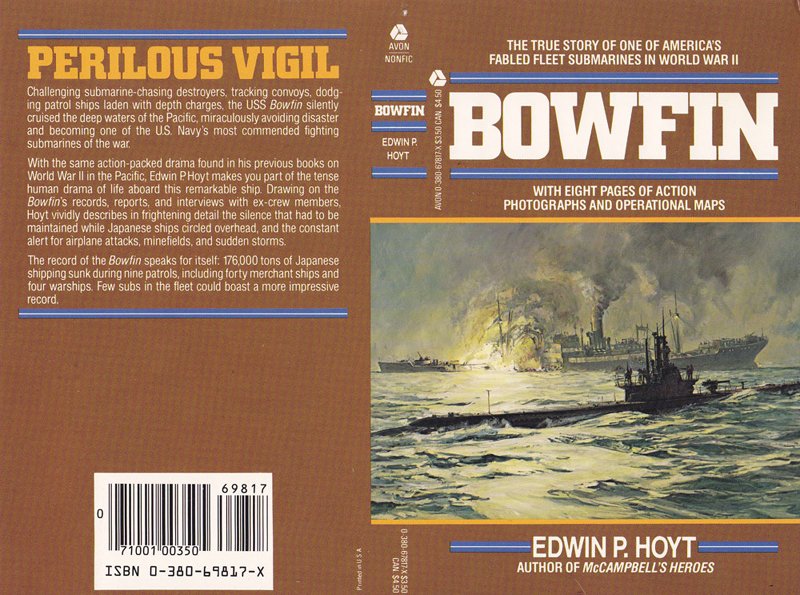 The Bowfin's battle flag, depicting the 39 merchant ships and 4 military vessels claimed sunk. The single French flag represents a Vichy French merchant ship which was sunk off Saigon in convoy with Japanese vessels. 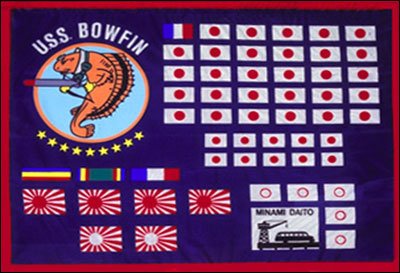 USS Bowfin launched from the Portsmouth Navy Yard in Kittery, Maine on 7 December 1942, exactly one year after the Japanese surprise attack on Pearl Harbor led to the declaration of war in the Pacific. The ship's auspicious birthday caused her to be nicknamed the "Pearl Harbor Avenger," a prophecy she would amply fulfill during her nine war patrols from mid-1943 until the war's end in 1945. The Bowfin and her crew operated throughout the Pacific, primarily near the Philippines and the islands of Japan, and by the time the Empire of Japan capitulated, she had sunk 44 enemy vessels for an approximate combined 176,000 tons (though the official postwar estimates are significantly lower--a common discrepancy much contested by submarine veterans).

The story of the Bowfin in many ways parallels the wartime development of the U.S. Navy's submarine fleet, which came into its own in the difficult proving grounds of the Pacific War. For though the United States possessed the largest submarine force in the Pacific in December 1941, like many of the Allied navies its technology and tactics were relics of World War One--the first conflict to have applied submarines in warfare on a wide scale. Having to deal with much vaster distances in the Pacific, American submarines possessed important features that the German U-boats (which had revolutionized naval warfare during World War One) did not, such as air conditioning and water distilleries, but new approaches had not been aggressively implemented to keep up with rapidly advancing weapons and detection technology. American submarines were armed with defective torpedoes that had undergone inadequate prewar testing and failed to make a significant dent in Japanese shipping during the first year of the war. Moreover, prevalent but obsolete strategic thought viewed the submarine as merely a support echelon to the traditional surface battle fleets of wars past.

Bowfin began service as the winds of change took effect. High-ranking naval commanders began to see the true potential of the submarine as a weapon in its own right, unshackled from general fleet scouting duties and able to operate deep within enemy territory to disrupt the movement of troops and supplies. Furthermore, reports on the defects of the Mark 14 Torpedo were being investigated by early 1943, and Bowfin would only be forced to use them for her first year of service--indeed, firsthand reports in March 1944 from Bowfin's skipper, Commander Walter T. Griffith, after the sub's fourth patrol were instrumental in dismantling the last resistance to replacing the defective torpedo models. The introduction of improved torpedoes caused a sharp upswing in the number of kills made by American subs.

Bowfin herself was a representative of the submarine fleet's rapid modernization: as a Balao-class sub, she was designed as an upgrade to the older Gato-class, which had been introduced in 1941. Though many Gatos built as late as 1943 continued to serve, the Balaos soon formed the backbone of the increasingly robust American submarine service, with over 120 built during the war (roughly 77 Gato-class subs saw action). The Balao-class featured structural improvements that granted a greater maximum depth than the Gato-class, helping the submarines avoid detection or antisubmarine attacks like depth charges.

These myriad improvements bore fruit. Reports vary widely as to how many Japanese vessels were sunk by American submarines, but they number in the thousands. By mid-1945, the Japanese merchant marine had been torpedoed down to approximately a quarter of its prewar size. This had a devastating effect on the industrial capacity Japan required to carry on the fight--as an island nation, many of the materials needed to manufacture weapons, tanks, planes, and warships had to be brought in by sea. Bowfin was in the thick of it, preying on vulnerable convoys throughout Japanese-controlled waters. As the war progressed and American forces "island-hopped" toward the Home Islands, Bowfin helped tighten the noose, even venturing into the Sea of Japan on her ninth and final patrol.

Though highly commendable from a military perspective, the human cost of unrestricted submarine warfare was often horrific, and Bowfin's crew would only discover the full extent long after the war. On 22 August, 1944, Bowfin attacked a convoy in the Philippine Sea and sank several ships, including an unmarked freighter named the Tsushima Maru. The freighter's cargo, unfortunately, was over 1,500 civilians evacuated from Okinawa--more than half of them schoolchildren. 1,482 civilians perished when the Tsushima Maru went down, roughly equivalent to the death toll of the Titanic. Of the 834 children aboard, only 59 survived. Originally kept secret by the Japanese government, the news was released after the war. Bowfin's crew was only to find out the deadly price of their attack on the unmarked vessel twenty years after the fact. Today, a museum in Naha, Okinawa commemorates the lives lost and features photographs of many of the children who were killed.

USS Bowfin returned home at war's end with a Presidential Unit Citation (earned during her second patrol), Navy Unit Commendation, Philippine Presidential Unit Citation, and many decorations for her officers and men. Of the 288 U.S. Navy submarines that served during the war, Bowfin ranks in the top 20 for total enemy ships sunk. The venerable submarine was decommissioned soon after the armistice but reactivated as a training vessel in 1951 at the onset of the Korean War. She remained in service as such throughout the 1950s and 1960s in San Francisco and Seattle, finally to be retired and struck from the Navy list on 1 December 1971, just days before her 29th birthday and the 30th anniversary of the Pearl Harbor attack.

But she was not bound for the scrap heap like so many of her sisters. Only months after her decommissioning, the Secretary of the Navy was approached by  World War Two submarine veteran and Pearl Harbor survivor Admiral Bernard A. Clarey, who was interested in acquiring and preserving the vessel as a monument to the brave submarine crews of the war. A 1956 act of Congress allows

"the Secretary of the Navy to transfer by gift or otherwise, any obsolete vessel of the Navy to any U.S. non-profit organization who would promise to restore and preserve the vessel at no cost to the U.S. government and its taxpayers....no part of the submarine may be activated for the purpose of navigation or movement of the submarine under her own power."1

The Bowfin would also have to be "maintained in a manner that would not be a discredit to the U.S. Navy or to the proud heritage of the submarine."1 Under these stipulations, ownership of the sub was transferred in 1972 and she was towed to Pearl Harbor, where the search for a permanent berth commenced. In 1978 the non-profit Pacific Fleet Submarine Memorial Association (PFSMA) was chartered to maintain custodianship of the submarine, which found its present home in the historic harbor in 1980. Since April 1981, the museum ship has been open to the public as a living testament to the sailors who served beneath the surface of World War Two's unforgiving waters. In 1989, its mission expanded when it merged with the Pacific Submarine Museum, which had not been able to remain convenient for public visitation while on its previous station inside the Pearl Harbor Submarine Base.

Today the museum houses thousands of artifacts related to American submarine service, including a one-of-a-kind scale cutaway mockup of a Cold War-era C-3 Poseidon ballistic missile. Admission to the submarine itself includes an audio tour. In addition to these public exhibitions, the museum maintains a massive research library open by appointment to qualified researchers, submariners, and their families.

Open Daily from 7 am to 5 pm Closed on Thanksgiving, Christmas and New Year’s Day