The Wind Spirit sculpture is the centerpiece of the Gaines County Museum in Seminole, Texas. 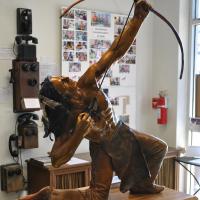 The Gaines County Museum in Seminole, Texas, seeks to “promote the collection, preservation, educational interpretation, and displays of the artifacts, documents and events most representative of Gaines County.”

The museum also attempts to represent the five major cultures that contributed to the formation and development of the county:
1.  Comanches
2.  early Anglo pioneers (who set up ranches and farms)
3.  Hispanics
4.  Black Americans from whom the city derived its name
5.  the German-speaking community (Mennonites)

The county was Comanche country until the U.S. Army campaigns of 1875 and 1876. Buffalo hunters moved through the region in the 1870s, and established ranches to remain in the area after the game disappeared. Farming developed in the county in the early 1900s, and by 1905 the population was sufficient for the establishment of a named county, with the town of Seminole as its seat. 1907 saw the building of a courthouse; a jail was built in 1909. By 1910, 206 farms and ranches were scattered throughout the county, growing corn and fruit trees (mostly peaches). Cattle ranching was the primary focus, however, with 32,250 cattle roaming the ranges.

The Dust Bowl and the Great Depression of the 1930s and 1940s devastated the economy of the county. New irrigation techniques developed during the late 1940s revived agriculture. Farmers abandoned the flood method of irrigation because the sandy soil would not hold the water, and began utilizing the vast stores of underground water with sprinkler irrigation. Mechanization also helped turn what had been a desolate area into a blooming garden. Tractors and other machinery displaced the old technique of plowing one row at a time behind a team of horses.

The population of the county gradually increased after the 1940s, rising to 8,909 in 1950, 12,267 in 1960, 11,593 in 1970, and 13,150 in 1980. In 2014 the county had a population of 19,425, of which 38.7 percent was Hispanic; about 58.3 percent of the population was Anglo, and 2.1 percent was African American. U.S. Highways 180 (west to east) and 385 (north to south) are the major roads. Communities include Seagraves (population, 2,609), Ashmore, Higginbotham, and Loop. Seminole (population, 7,110) is the largest town, market center, and county seat. A settlement of Mennonites has developed near Seminole. The community has its own school and church and maintains its agrarian religious traditions. Most of the Mennonite farmers moved to Texas from Mexico, where regulations against foreign ownership of land had become burdensome.