The NAS (Naval Air Station) Sanford Memorial is located in Sanford FL, at the entrance of the Orlando-Sanford International Airport. Established in 1942. Home to the Sanford Airport Memorial Committee and Park. The NAS Sanford has a fully restored RA-5C Vigilante aircraft which honors the Naval Air Station Sanford and all those who served at and supported the base. The Air Station played a major role in training pilots in WW2, the Korean War, the Cold War, the Cuban Crisis, and the Vietnam War. Today it's used as a commercial airport, both domestic and international.

One of the original hangars of the base that was first built. 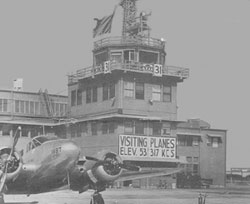 Inspection committee members enjoying a lunch on the base. 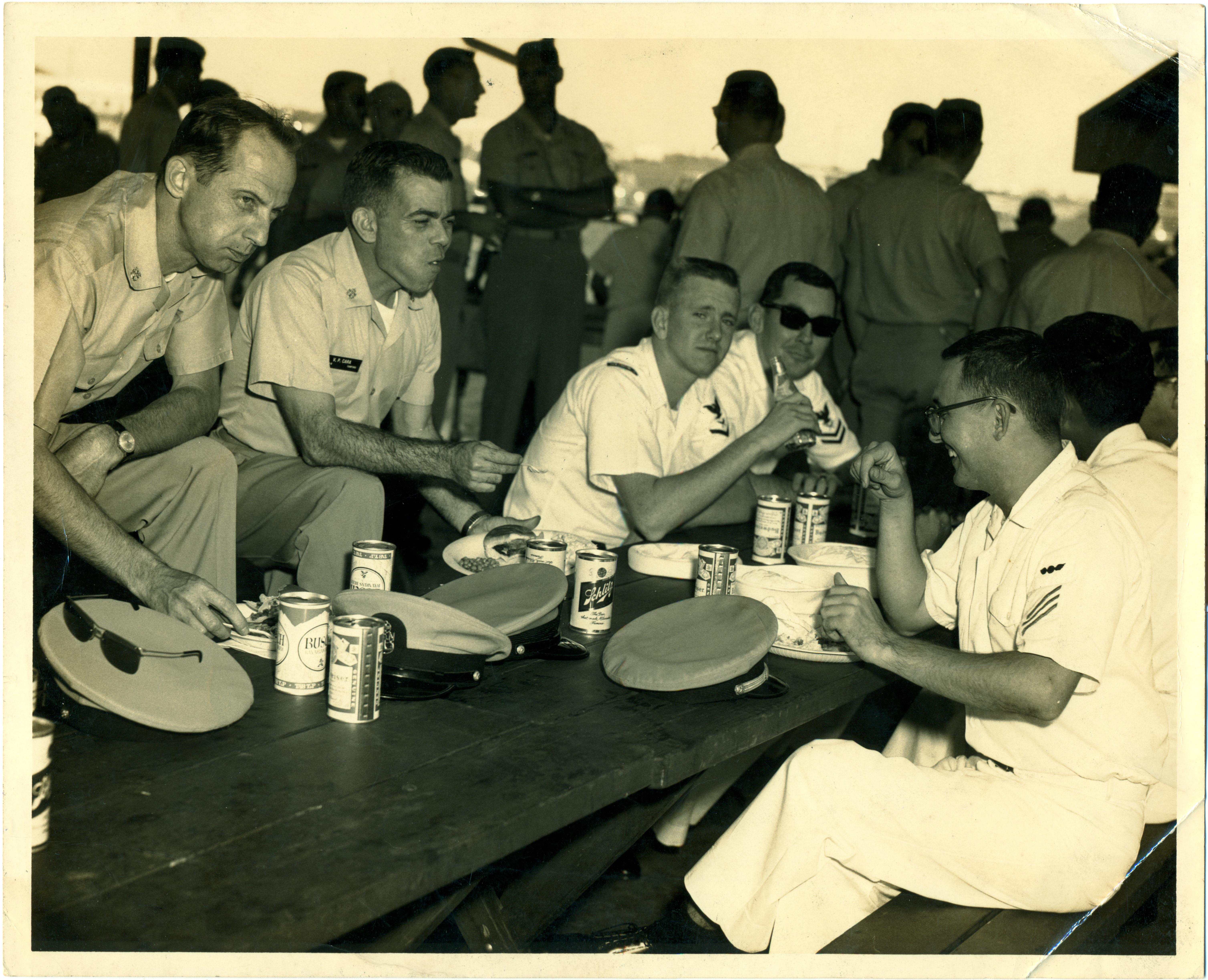 Henry Fazinni, a sailor, next to the sign for the NAS Sanford. 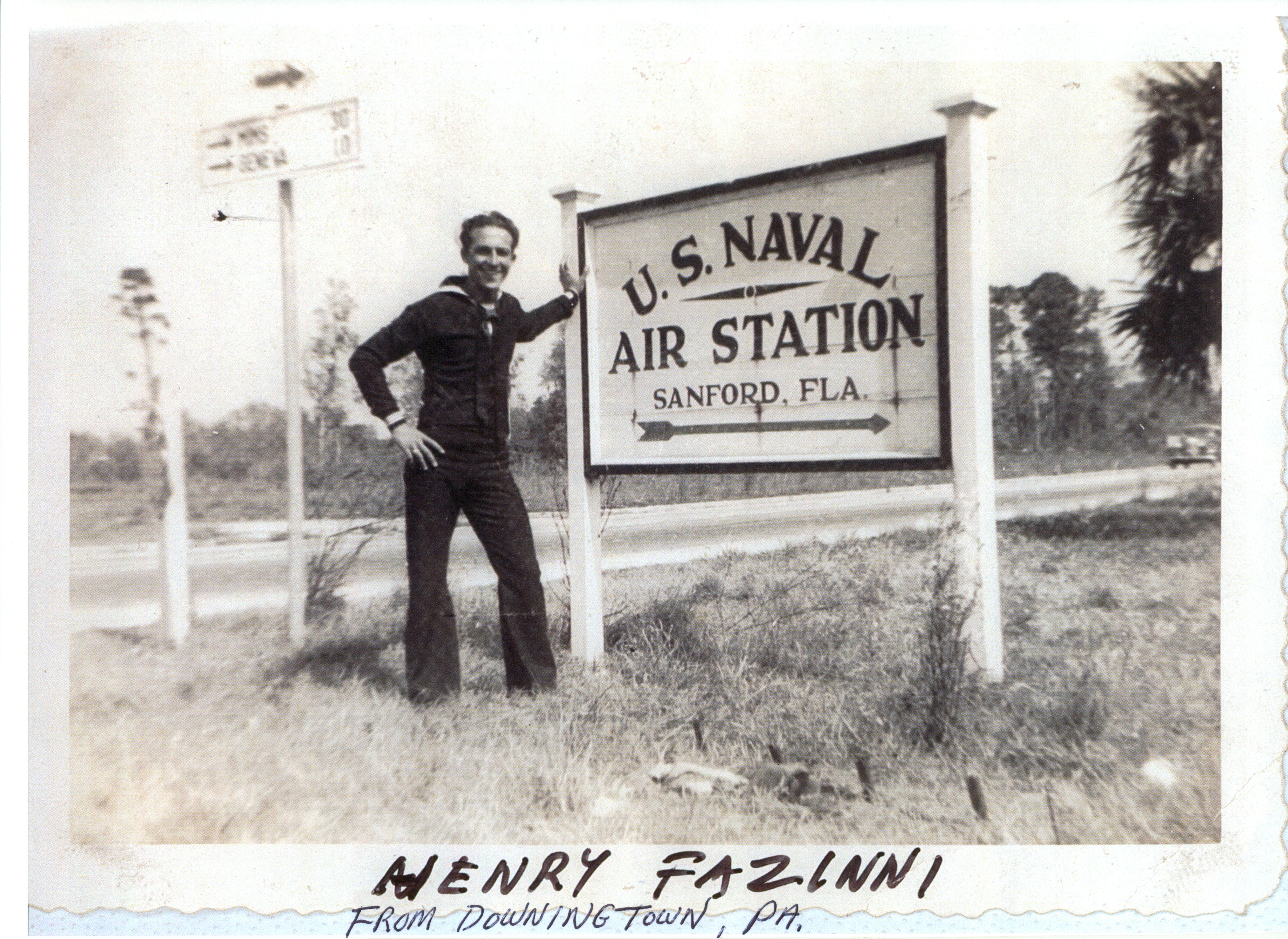 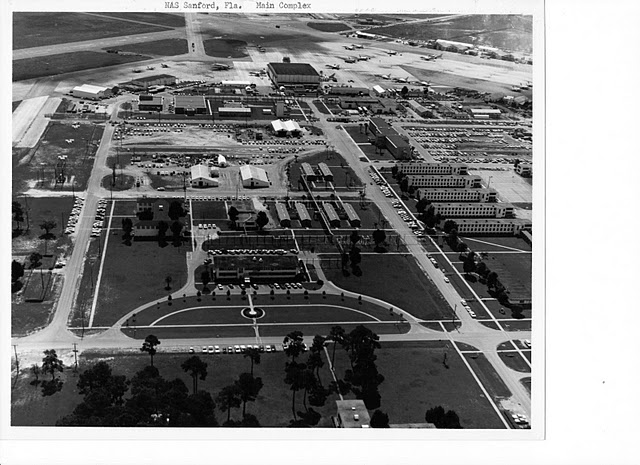 One of the original hangars of the base that was first built.

Inspection committee members enjoying a lunch on the base.

Henry Fazinni, a sailor, next to the sign for the NAS Sanford.

The site, first built in the 1940’s, was deeded to the United States Navy on June 11, 1942. The Navy felt they needed additional naval training sites and the base was officially commissioned on November 3, 1942 and became the Naval Air Station Sanford. NAS Sanford would train approximately 50% of the Navy’s carrier-based bomber and fighter pilots. The Navy selected a site in Sanford, Florida as a base for the Naval Air Operational Training Command. Sanford gave 865 acres to the Navy, who then purchased 615 more acres to finish the project. Four 6,000 foot runways were built by local contractors and were used to support the nearly 300 aircraft housed by the end of World War Two. PV–1 Venturas were developed during World War Two as a result of an agreement between the Navy and the USAAF(United States Army Air Forces). These aircrafts were first distributed to the NAS Deland before being distributed to the NAS Sanford station. These aircrafts were exceptional technology at the time and NAS Sanford was part in helping turn the tide in their own way. By the end of the War, the station was home to 385 officers, 1,385 enlisted men and had trained over half of the naval aviators piloting carrier-based fighters involved in the pacific theater. In 1946, with the end of World War Two, the station’s job was complete and it was decommissioned. The City of Sanford acquired the base and renamed it the Sanford Airport. As the Sanford Airport, the site accommodated several tenant between 1946 and 1950, including the New York Giants training camp, a retirement home, a hospital, and a small shopping mall. The Sanford Airport was just one of the things that gave rise to Florida’s popularity after WWII. Dr. David J. Coles states in his book Florida World War II Heritage Trail, “ The Second World War marked the emergence of Florida as a modern, influential state. The conflict spurred economic development and lead to a post war population surge that made Florida one of the most populous states in the nation by the dawn of the 21st century.”(Coles, P.2)

When the Korean War would begin in 1951, the Navy once again acquired the Airport for training. They used it again as an auxiliary air station to train carrier-based pilots including fighter, attack, and reconnaissance aircraft when the Vietnam War began. The SAMC (The Sanford Airport Memorial Committee) gives a summary of the NAS during the Korean War, “In June of 1955 the base became home to Reconnaissance Attack Wing One. January 1957 saw the arrival of the first A3D Skywarriors,the Navy's largest carrier based bombers.They were followed in 1960 by the North American A-3J known as the Vigilante. The first RA-5C Vigilante arrived in Sanford in December of 1963. This aircraft was designed as a nuclear bomber but was later converted to a reconnaissance aircraft and played a major role in the Vietnam conflict.” The SAMC also states that, ”NAS Sanford eventually became home to ten Vigilante squadrons and their families.” In 1968 Congress closed the Sanford NAS and moved all of their assets to Albany, Georgia. As of then The Sanford NAS operates as the Orlando Sanford International Airport. The SAMC states on their website that, “The RA-5C Vigilante was designed and built by North American Aviation as an advanced supersonic attack aircraft. It was the largest supersonic carrier aircraft in the Navy. Originally designed as a bomber, it was later realized that it was much more effective in the role of a high speed reconnaissance aircraft.” The first RA-5C Vigilante flew on June 30, 1962. The Vigilante was put into action during the Vietnam War along with the squadrons that were assigned to NAS Sanford, Florida.Eventually in 1968, Congress relocated all squadrons and aircraft to NAS Albany, Georgia and closed the base.

NAS Sanford was home to many important U.S. Navy personnel, including aviators and ground personnel. “The airfield was named after LCDR Robert W. Ramey, a decorated WWII pilot. He sacrificed his life in 1958 while saving his crew before his A3D Skywarrior exploded and crashed. Captain Kim Kimmons was the last NAS wing commander before the base was closed and moved to NAS Albany, Georgia in 1968. Commander Leroy Heath and Lt. Larry Monroe set a new world altitude record of 91,451 feet while flying an RA-5C Vigilante. They were both awarded the Distinguished Flying Cross and Air Medals.” These men’s heroic acts are listed in the NAS Sanford Memorial website.

The City of Sanford realized that if the base closed it would pose an economic threat to the local economy. In order to reduce that treat, the City negotiated with the federal government to purchase the old NAS property for the sum of $1.00. In order to promote the industrial aspects of the Airport, the Sanford Industrial Commission was established until it was replaced in 1970 by the City Department of Aviation. All other operations –administrative and operational – was controlled by the City. In 1971, the City of Sanford created the Sanford Airport Authority. Since 1971 the Sanford Airport Authority has been responsible for the operation, maintenance, and development of the Airport and its facilities.

Without the Naval Air Station, Sanford wouldn’t be the city it is today. Originally a rural celery-farming community, home to predominantly African American residents, the city was impacted both positively and negatively due to the Air Station. As more and more enlisted white soldiers and their families moved into the area, racial tensions grew as the Black residents were pushed out of their neighborhoods. The Cold War saw a major demographic change in the city – in a 1940 census, half of the population was Black, but by 1960 it was only 11 percent. When the base was decommissioned in 1968, it dealt a major financial blow to the city of Sanford. The base provided jobs for thousands of Sanford citizens and the closing of it led to the eventual migration of the middle class whites away from Sanford and Seminole county as a whole.

NAS Sanford and Its Impact on the United States and The City of Sanford,FL. History Engine. https://historyengine.richmond.edu/episodes/view/5605.