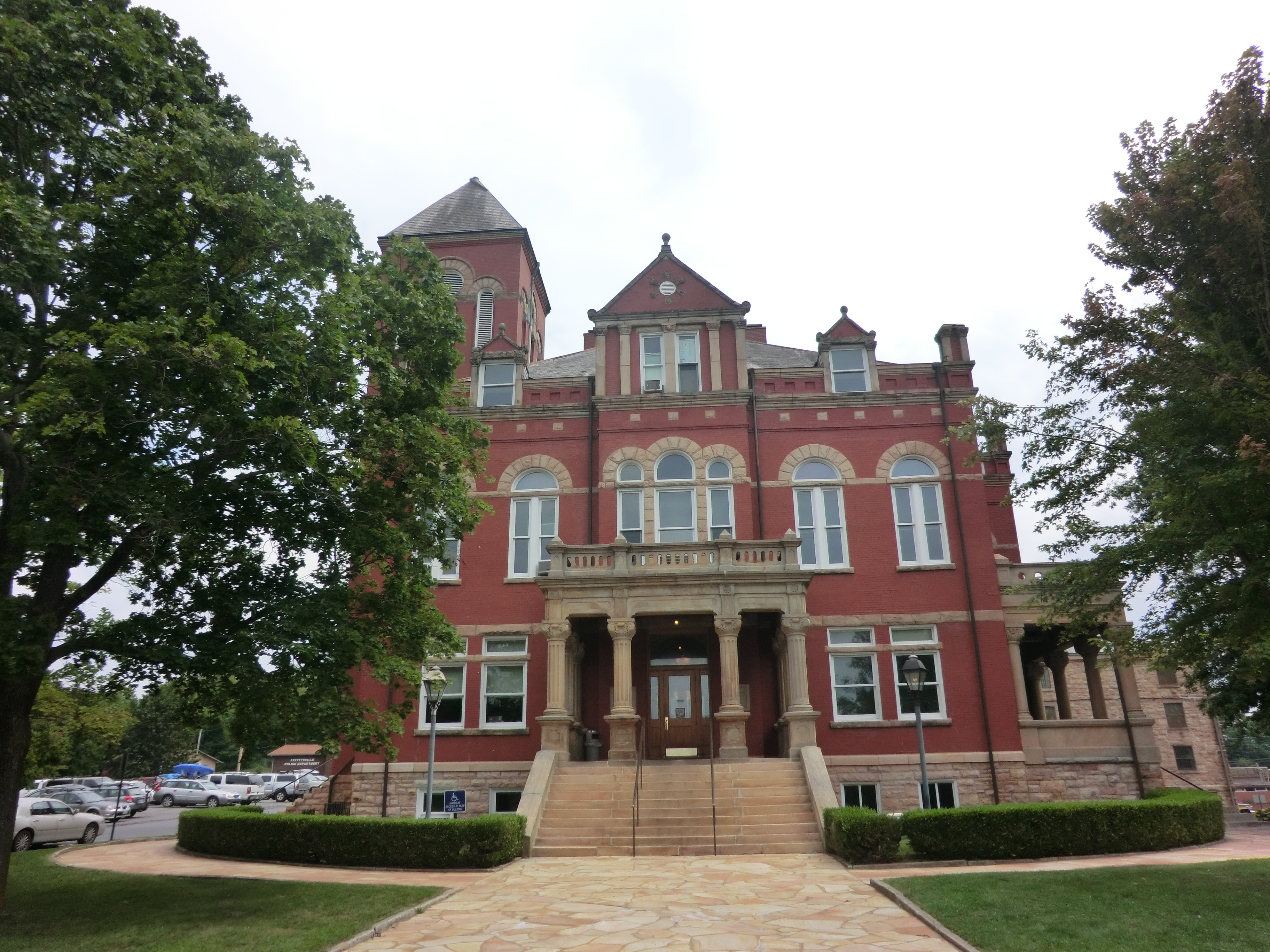 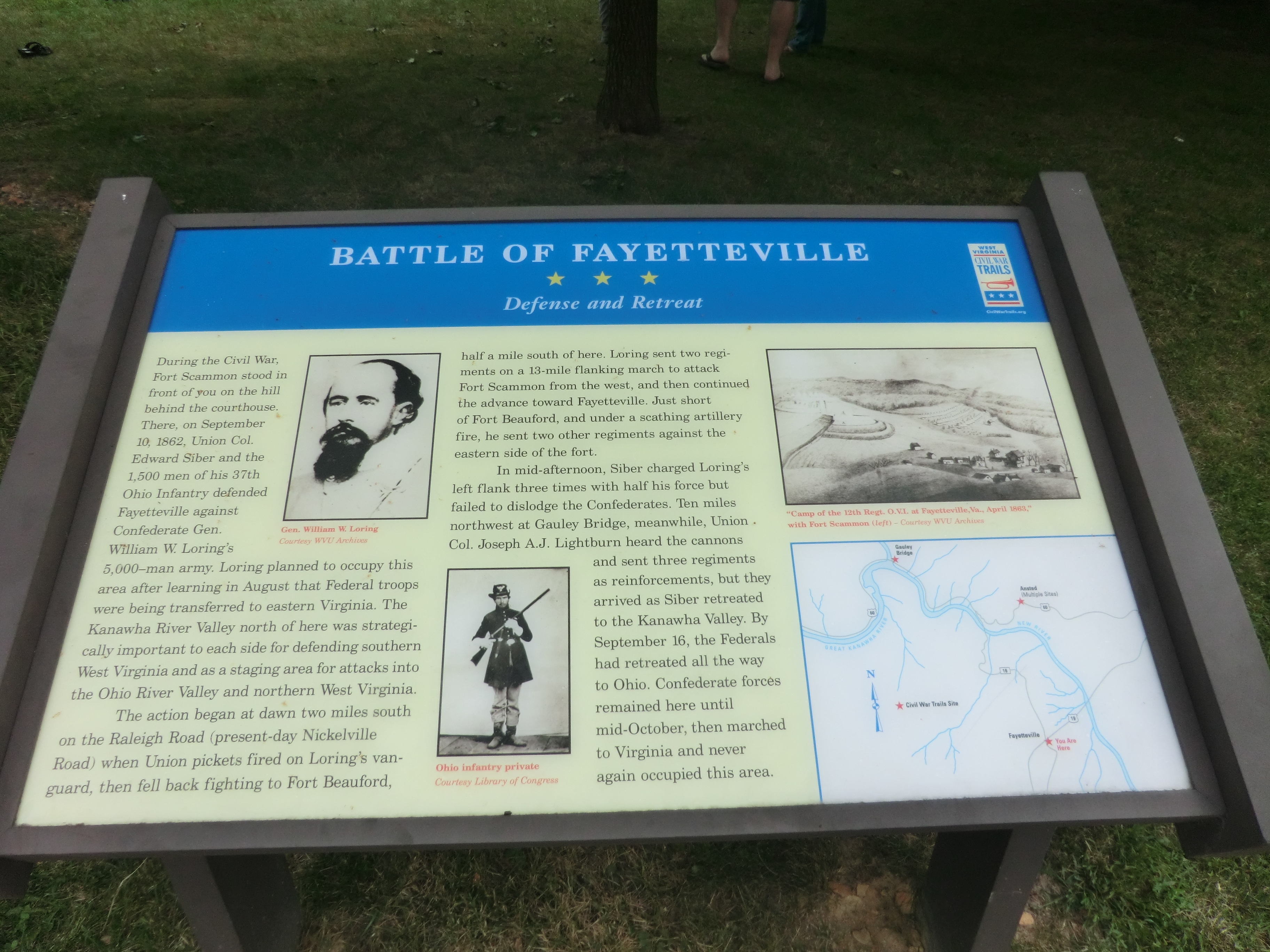 Confederate General Robert E. Lee recognized the tactical potential of the Kanawha Valley area between Fayetteville and Charleston in western Virginia (modern-day West Virginia).  This area was occupied by Union soldiers, with their main force encamped at Fort Scammon in Fayetteville. In response, Lee planned a coordinated attack on the fort.

Confederate forces simultaneously attacked the front and rear areas of the fort.  Union leaders made a counter-attack to the rear of the fort but this action was unsuccessful in forcing the Confederates to withdraw. Recognizing that they could not surround and capture the Union soldiers, who were now on the defensive, Confederate forces pulled back to allow their withdrawal.  As they left, the Union troops set fire to the supplies within the fort.

Once on the road to Gauley, Confederates ambushed the Union troops and continued their fight with small skirmishes all the way to Charleston. The Union troops pulled all the way back to Point Pleasant, leaving a Confederate force of approximately 4,000 troops in control of the Kanawha Valley region. However, the Confederate leaders would not control this area for long.

A Civil War marker outlining the events of the battle at Fayetteville is located on the lawn of the Fayette County Court House. The marker is close to the area where Fort Scammon was located. The inscription on the Battle of Fayetteville Civil War Marker reads as follows:

“During the Civil War, Fort Scammon stood in front of you on the hill behind the Courthouse.  There, on September 10, 1862, Union Col. Edward Siber and the 1500 men of his 37th Ohio Infantry defended Fayetteville against Confederate Gen. William Loring’s 5000-man army.  Loring planned to occupy this area after learning in August that Federal troops were being transferred to eastern Virginia.  The Kanawha River Valley was strategically important to each side for defending southern West Virginia, and as a staging area for attacks into the Ohio River Valley and northern West Virginia.
The action began at dawn two miles south on the Raleigh Road (present-day Nickelville Road) when Union pickets fired on Loring’s vanguard, then fell back fighting to Fort Beauford, half a mile south of here.  Loring sent two regiments on a 13-mile flanking march to attack Fort Scammon from the west, then continued the advance toward Fayetteville.  Just short of Fort Beauford, and under a scathing artillery fire, he sent two regiments against the eastern side of the fort.
In mid-afternoon, Siber charged Loring’s left flank three times with half his force but failed to dislodge the Confederates.  Ten miles northwest at Gauley Bridge, meanwhile, Union Col. Joseph A.J. Lightburn heard the cannons and sent three regiments as reinforcements, but they arrived as Siber retreated to the Kanawha Valley.  By September 16, the Federals had retreated all the way to Ohio.  Confederate forces remained here until mid-October, then marched to Virginia and never again occupied this area.”

Fayetteville was founded by Abraham Vandal, a Revolutionary War veteran, and local farmer.  The town was originally named Vandalia; but was later changed to Fayetteville (before 1837) after Revolutionary War hero, Marquis de Lafayette.  Fayetteville is the county seat of Fayette County.  Fayetteville has a population of approximately 3,000 and has been featured as a “Top 10 Coolest Small Towns in America” (2006) by Budget Travel Magazine, and “Best River Town” (2013) by Blue Ridge Outdoors magazine.  Fayetteville is also the home of the New River Gorge Bridge; the third longest single arch bridge in the world.