The Florida Citrus Tower is a 226-foot-tall tower and tourist attraction located in Clermont, Florida. Built in 1956, it was intended to allow visitors to observe the orange groves in the surrounding area. The antenna reaches over 500-feet above sea level, making this structure the highest observation point in the state. It serves as a tribute to Florida's citrus industry. 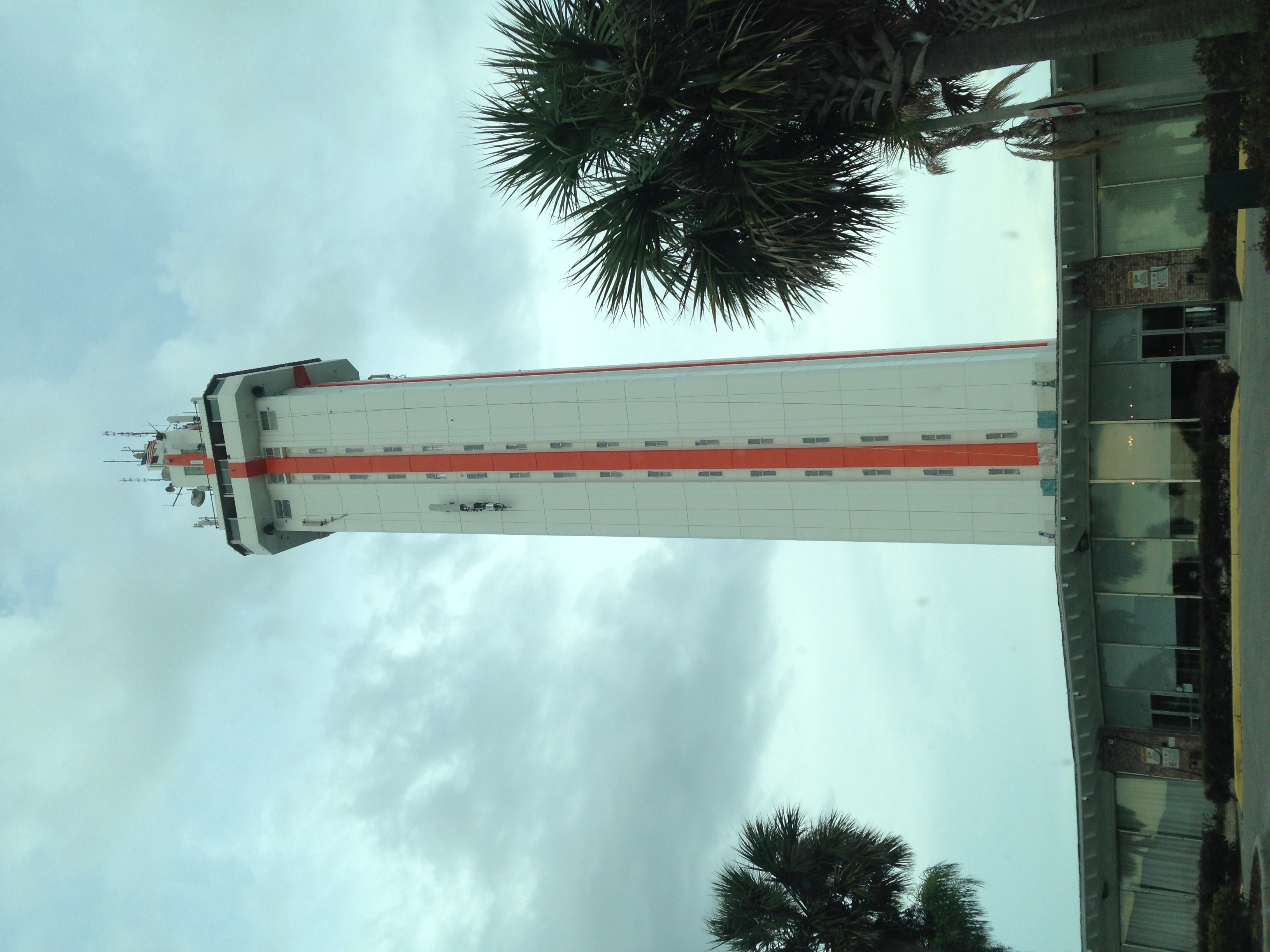 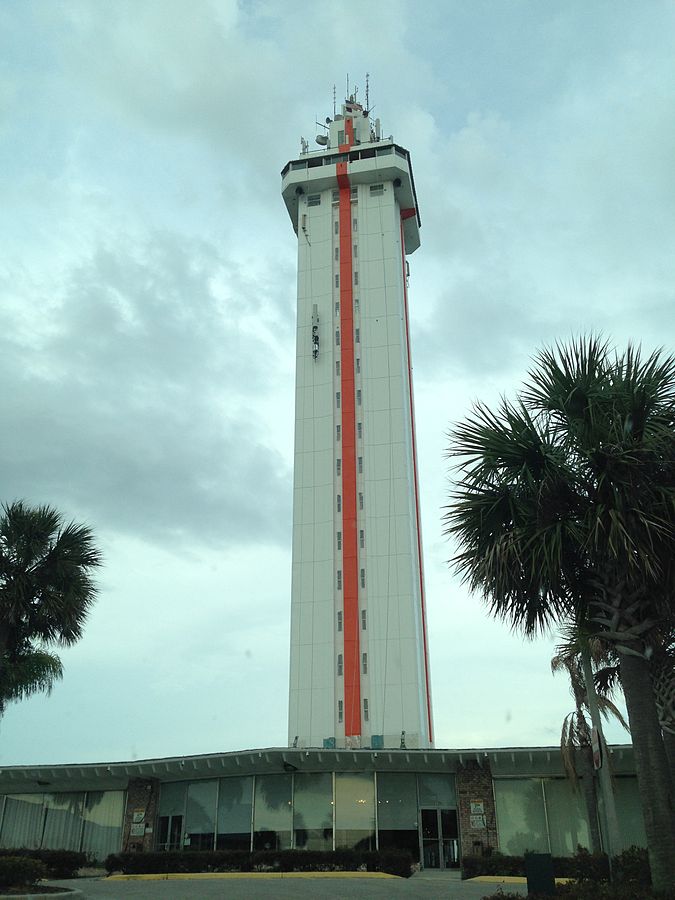 The Florida Citrus Tower is a 226-foot-tall building located in Clermont, Florida. It opened in 1956 after over a year of construction. Built on one of the highest hills in Florida’s ridge section, the original plans for the tower were for a modest 75-foot tall structure. Measured from the highest antenna, the tower is over 500-feet above sea level, making it the highest observation point in Florida. The tower quickly became the most popular tourist destination in the Orlando area. This high traffic was in part due to its position on Highway 27, and the site once brought in over 500,000 visitors a year.

Following the 1964 extension of the Florida Turnpike, which provided an alternate route through Central Florida, the Citrus Tower declined in popularity. Moreover, a series of freezes destroyed much of the citrus industry in the area. One of the many efforts to draw visitors back to the tower was a tram tour built in 1988. The tour visited a 4 1/2-acre grove behind the tower and educated guests on the history of citrus production in Lake County. None of the efforts were particularly successful, however, and the tower changed ownership several times. The current owner, Greg Homan, purchased the tower in 1995. In 2015, a repainting job added the distinctive orange line down the middle.

Currently, about 15,000 guests ascend the Citrus Tower and enjoy the view from the glass-enclosed observation deck. Other attractions on site are a wishing well, banquet facility, gift shop, and the Christmas light show. Next to the tower is a wax museum, the "Presidents Hall of Fame," which features a full-scale replica of the White House interior. The Florida Citrus Tower serves as a monument to Clermont's history and the importance of the citrus industry in Florida.

Before Walt Disney and Universal Studios, Florida had attractions that showed the beauty of the sunshine state. One of these attractions was Lake County’s Florida Citrus Tower. One of Florida’s most successful tourist attractions of its time. Built in the 1950’s this tower still stands tall today in the year of 2020. Originally the plan was to build the tower 75 feet but when construction finished the tower in 1956 the Florida Citrus Tower opened for visitors. After a last minute change of plan the tower stood over 226 ft tall and was 22 stories tall. The tip of its antenna reached 500 feet in the sky, imagine running 75 yards on a football field vertically! The Tower’s history is harsh and plentiful, just as mother nature will show us.(1)

The tower was created to allow its viewers to observe miles of surrounding orange groves, rolling hills and hundreds of spring fed lakes. Grieg Holman’s goal was to bring people to Florida. He achieved it, bringing in nearly 500,000 people to the tower for the first serval years of their opening. For years the tower and the city of Clermont flourished. In the mid 50s while it was being built, so was the construction of the Florida turn pike. This new road will allowed drivers to go from South Central Florida to North Central Florida in no time due to this new great highway people no longer needed to drive by the tower by passing the tower which everyone had to drive home from when coming and going while visiting the state. This small change in how people traveled caused business for the Citrus Tower to decline, and the worst had yet to come.

In 1957 Florida experienced one of its harshest winters ever, killing 80 percent of the orange groves in Lake County. One freeze could potentially bankrupt an average farmer at the time. The problem they faced in the 80s was that there wasn’t only 1 freeze but 3 major freezes. The citrus tower’s main attraction was the beauty of the orange groves and the untouched hills and to see nature and how we could create our own garden and almost foreign looking orange trees how they all line up perfectly in rows over the long fields and grassy meadows. People came thousands of miles to see the Famous Florida Citrus Tower.(Larson)

Just like the crops, business stocks rise and fall, some years they are good and some years they are bad. The towers business fell after enjoying its most visitors it had seen to this day. Nature struck first with one of many freezes to come. The first freeze came in December of 1983. The two day freeze caused nearly 1 billion dollars of damage and killed up to 120,000 acres of orange trees.

The farmers were slowly able to replant and rebuild from their losses, when suddenly the next major freeze happened in 1985. The weather gods were not forgiving. Development destroyed not only the farmers crops but they couldn’t provide for themselves anymore. were forced to sell their land.

This is how urban growth slowly started to take over. Developers started buying land and selling smaller parts of it to business owners who could afford it. Over time the once green and orange hills of Lake County had the parasite we call construction and urban growth. Mother Nature took the last punch 4 years later, the freeze of 1989 the worst of the 3 freezes. The tower continued to send people to the top. Now instead of being in the middle of long lush fields of oranges trees and lakes you are surrounded by concrete buildings and highways. This forced Grieg Holman to sell the tower and the land around. (Carrie)

The new current owners have really turned it around. Visiting the tower today has many more attractions such as a guided tour to the top of the building with very well trained guides who you can really tell love their job and the history of the building. Large businesses and individuals may rent out the top area for private functions as well. Also don’t forget to take advantage of the coffee shop at the base level. They have a young hip audience who do their studying there and just hang out. The ground floor also has an arcade, and bar for adults and children. The building also has a BBQ spot and plenty of things to do in the plaza. Recently the hours of operations have changed due to the discovery of the Disney fireworks being visible from the top. The Tower hosted a private event and the event went long, which lead to the discovery of the light show the guest were given that night. This small discovery was just put into practice for daily guest in February 2020. With word of mouth, the once popular Florida Citrus Tower might grab the attention of travelers again.(Winsburg)