This historical marker commemorates Joseph Lightburn, who served in the Union Army during the American Civil War. After the war ended, Lightburn returned to civilian life and became a minister. Reverend Lightburn led the Broad Run Baptist Church which is located a couple miles west of this marker. The church was established in 1804 and LIghtburn is buried at the cemetery. The marker is notable for referring to the Civil War as "the War between the States," a label that demonstrates the influence of the United Daughters of the Confederacy and other groups that sought to vindicate the Confederacy even in a state such as West Virginia. While Lightburn defended the Union and West Virginia seceded from Virginia to remain in the Union, pro-Confederate sentiment grew as a result of the UDC and other neo-Confederate groups who sought to revise the history of the antebellum South in ways that defended both slavery and secession. This view of the war minimizes the way that the war disrupted and often destroyed the lives of West Virginians. Many families were divided by the war and Lightburn himself found that he was fighting against childhood friend and fellow West Virginian Thomas Jackson served the Confederacy. 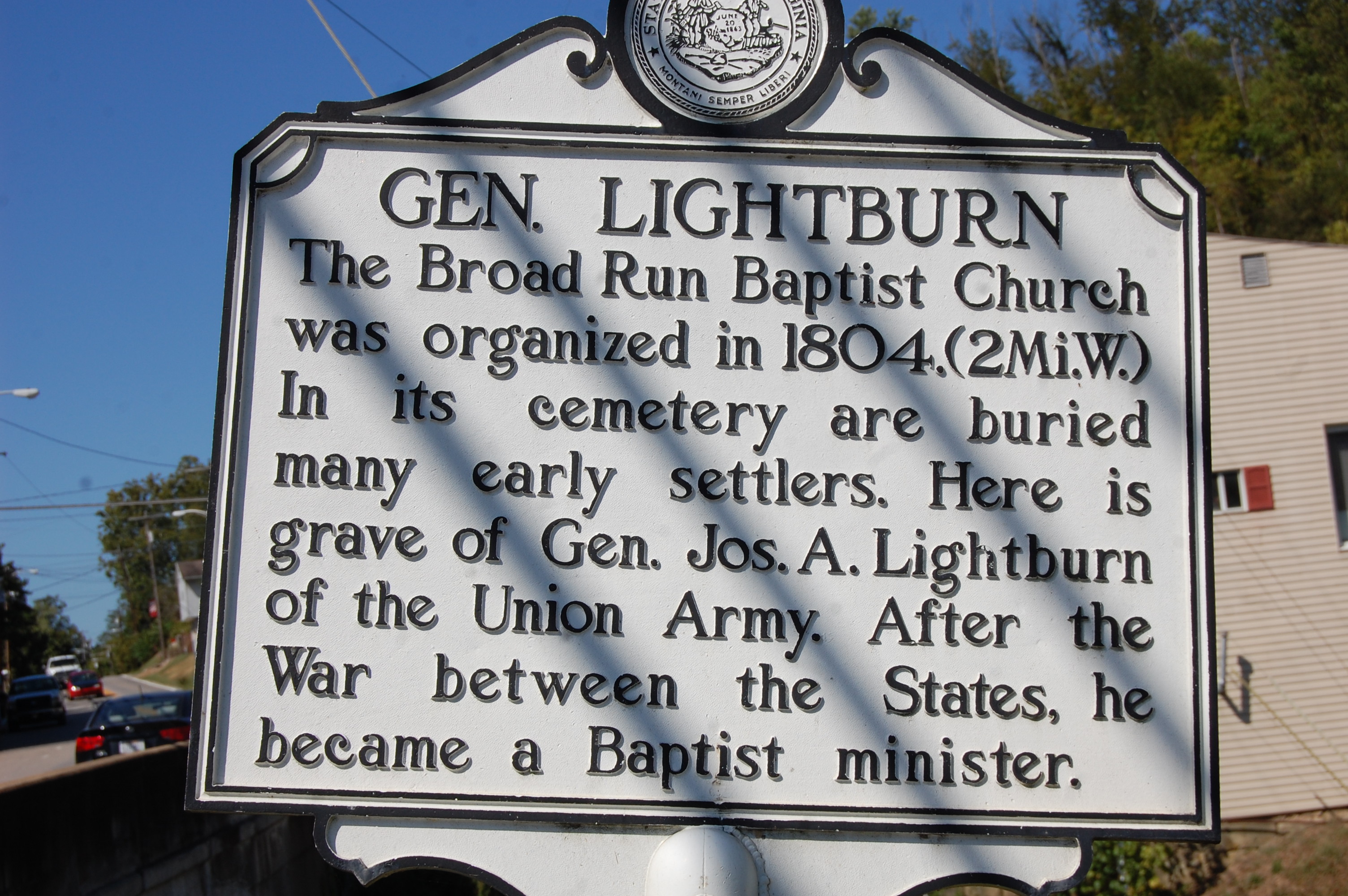 In 1840, Joseph Lightburn moved with his family to Lewis County, West Virginia. He was a childhood friend of Thomas “Stonewall” Jackson. He enlisted in the army in 1846 and left in 1851 as a sergeant. He operated the family farm and invited Jackson to Broad Run Baptist Church, where he attended. Thomas lived at Jackson’s Mill and rode horseback to the church.

On August 11,1862, General Cox and 5,000 soldiers were sent from the Kanawha Valley to defend Washington, D.C. This left 5,000 soldiers under the command of Colonel Lightburn to defend Charleston. Confederate Brigadier General Albert Gallatin Jenkins was sent to capture the area because it was a vital source of salt needed for meat preservation. On September 6, Confederate Major General Loring led 10,000 soldiers to confront the Union soldiers in Charleston. They succeeded in driving the Union Army to Fayetteville. On September 13, Charleston residents woke to the sound of artillery fire. Colonel Lightburn notified civilians to evacuate. As Lightburn's forces retreated, they set fire to many buildings to prevent them from being used by the Confederates. Union forces maintained a skirmish line during their fifty-mile retreat to Point Pleasant and kept their 700-wagon train from being captured. This incident became known as "Lightburn's Retreat." Union forces would recapture the Kanawha Valley about six weeks later.3

Lightburn later fought at Jackson, Mississippi in an effort to cut off supplies to Vicksburg. In May and June of 1863, he fought in the siege at Vicksburg. In an effort to cut off Confederate forces, Lightburn was sent with General William T. Sherman east towards the coast. He was injured during Sherman’s Atlanta Campaign in 1864. Lightburn was sent home to recover, and then returned to service in 1865.4

Two months after the War ended, he resigned from the army.  He spent the rest of his life as a minister, mainly at the Broad Run Baptist Church. He also served in the West Virginia Legislature. In 1901, he died in Broad Run, and was buried in the churchyard. The annual General Lightburn 5K run is held in Walkersville, West Virginia in his honor.