The Mud River Covered Bridge in Milton is one of seventeen surviving covered bridges in West Virginia. It is also the last Howe truss style covered bridge in the state. The fourteen-foot wide, 112-foot long structure was built over the Mud River around 1876 to accommodate increased traffic and commerce in the community. The bridge underwent few changes until a restoration project by the West Virginia Department of Transportation in 1971. In 2001, the bridge was moved to its current location on a pond in Pumpkin Park, the annual host of both the West Virginia Pumpkin Festival and the Cabell County Fair. The covered bridge was added to the National Register of Historic Places in 1975. 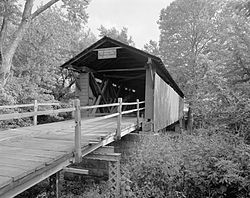 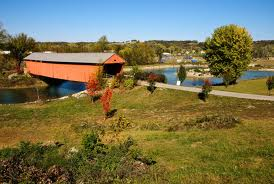 Interior view of the bridge with the Howe trusses visible 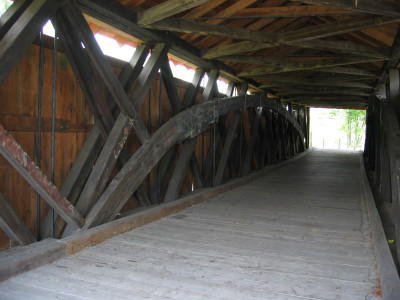 Architectural drawing of the bridge's trusses

Plaque near the bridge 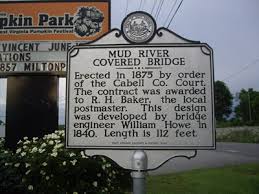 Covered bridges originated in Europe centuries ago and were an important component of the West Virginian landscape for many years. They were built over rivers and streams to create quicker, safer, and more reliable transportation routes. These simple structures were made with timber with triangular trusses for support. They were enclosed with walls and roofs to protect the bridges from the elements. Hundreds of covered bridges once existed throughout West Virginia, with most of them on turnpikes. Today only 17 survive, including the Mud River Covered Bridge.

The small town of Milton began growing steadily in the 1870s after the arrival of the Chesapeake & Ohio Railroad. To accommodate the increasing flow of traffic, the Cabell County Court commissioned the construction of a covered bridge to cross the Mud River in 1874. R. H. Baker secured the contract to construct the bridge, and work was completed by 1876. Milton was formally incorporated that same year. The fourteen foot wide, 112-foot long bridge is described as a Howe truss bridge. The style was developed in the early 1840s by William Howe, who included innovations such as a central arch, X-shaped trusses, and iron tie rods for additional support. The Mud River covered bridge greatly improved the quality of transportation in central Cabell County; it was heavily used by town residents, farmers, and travelers. It supported foot traffic, wagons, and later even automobiles.

For nearly a century the bridge survived with only minimal repairs and maintenance. Finally the bridge’s deteriorating condition led the West Virginia Department of Transportation to undertake a restoration project in 1971. Some beams were replaced, and steel girders were installed underneath for increased support; the original appearance was mostly maintained. Despite the improvements, the covered bridge was unable to keep up with the weight of modern traffic, and in 1985 use of the bridge was restricted to pedestrians only. It finally closed in 1996 and was moved a mile southeast for intended restorations. Work was delayed until 2001 when the bridge was moved to a pond at Pumpkin Park. Ahern & Associates Inc. conducted a $900,000 renovation of the bridge, strengthening it while also ensuring that it retained its original appearance. Today the covered bridge is open to the public for pedestrian traffic only. A nearby historical marker commemorates the bridge.