Located just outside of Alderson, WV in Greenbrier County, this pavilion reminiscent of Greek-style was built around 1834 and is the only remaining structure from the Blue Sulphur Springs Resort, a 19th-century mineral spa. In 1864, the Union Army burned the resort to keep the Confederate Army from utilizing the facilities. After the Union left the area, this pavilion was the only structure left standing. "The Blue" was added to the National Register of Historic Places in 1992 and is currently being restored by the Greenbrier Historical Society. 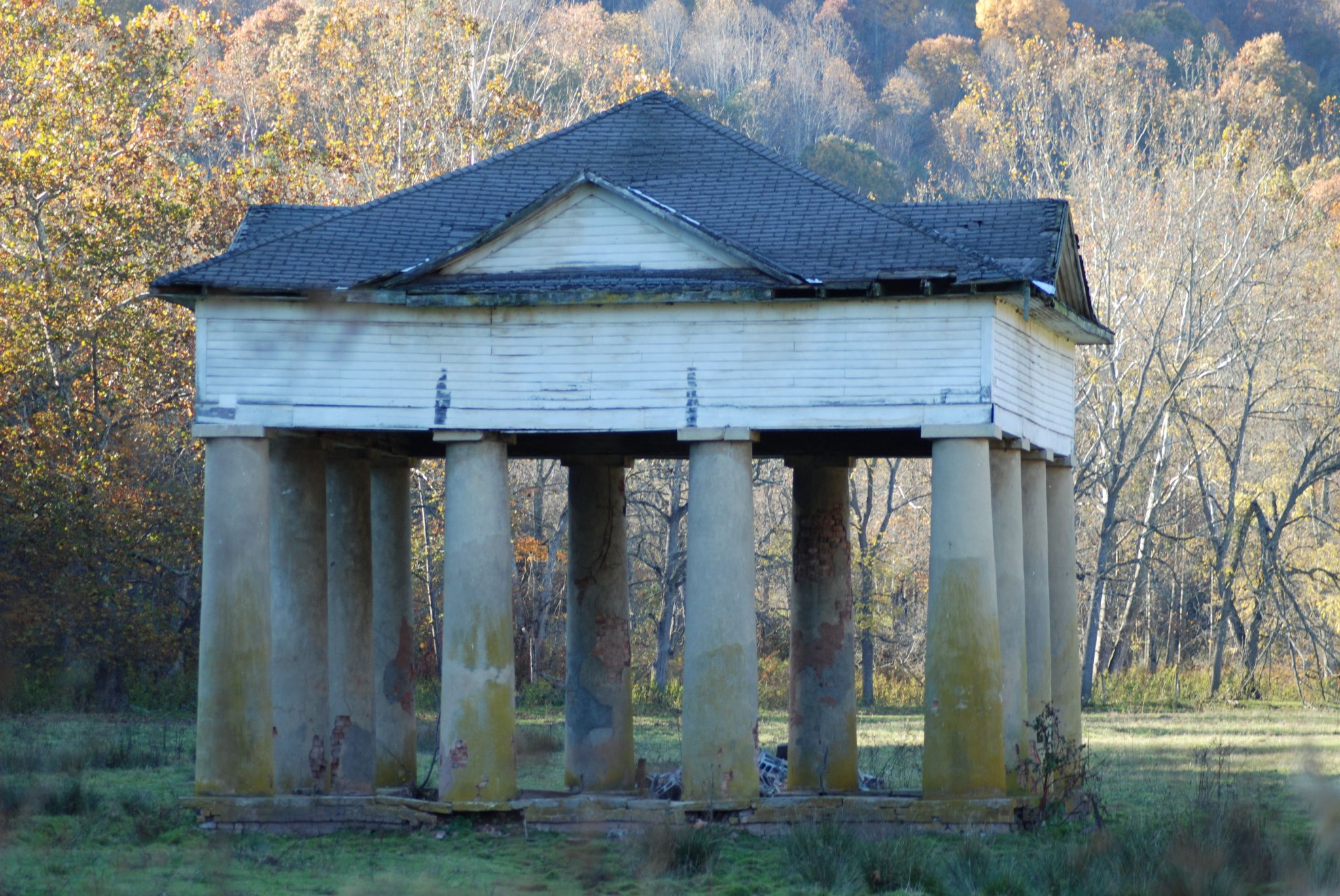 The Blue Sulphur Springs Resort in 1857 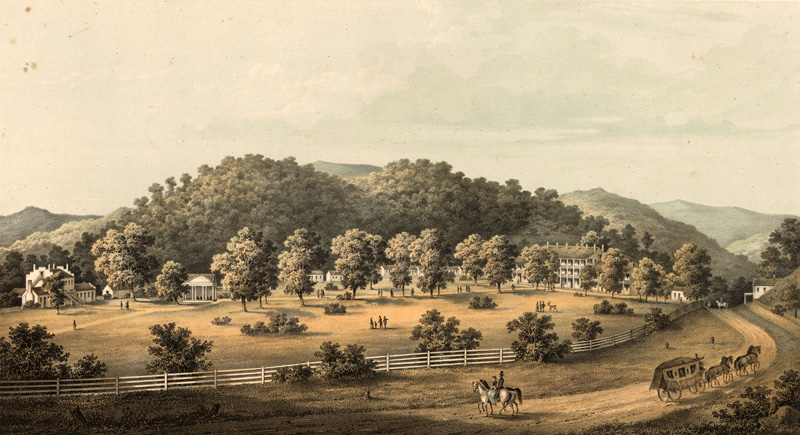 The pavilion remains standing in a beautiful rural landscape right outside Alderson, WV 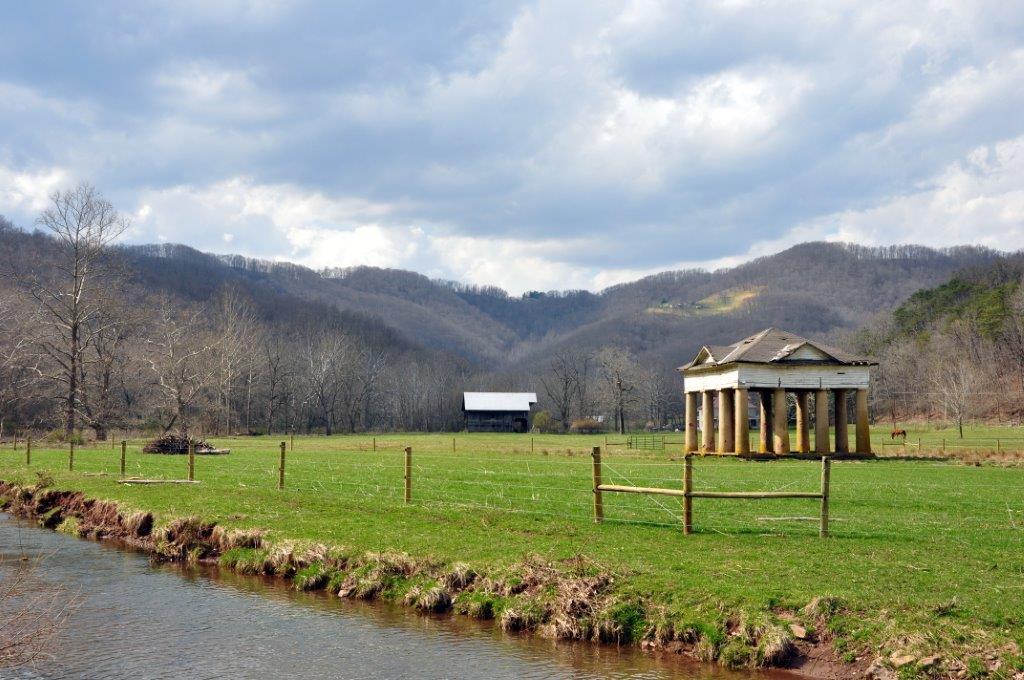 The pavilion was built directly over a natural spring which was believed to possess mineral water with the power to heal an assortment of physical as well as nonphysical ailments. 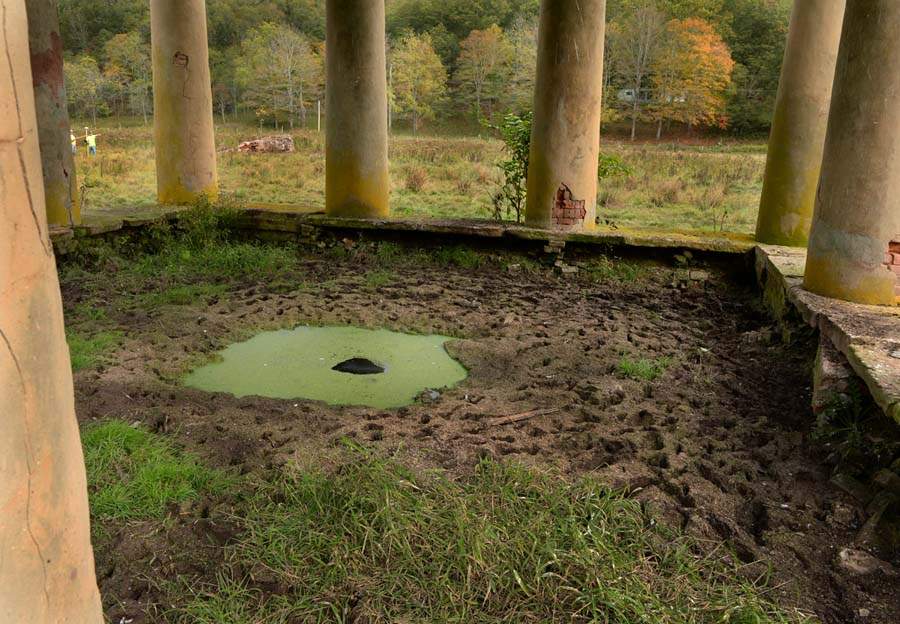 Despite it's crumbling stone, bricks, and wood, the pavilion has miraculously stood the test of time and elements. 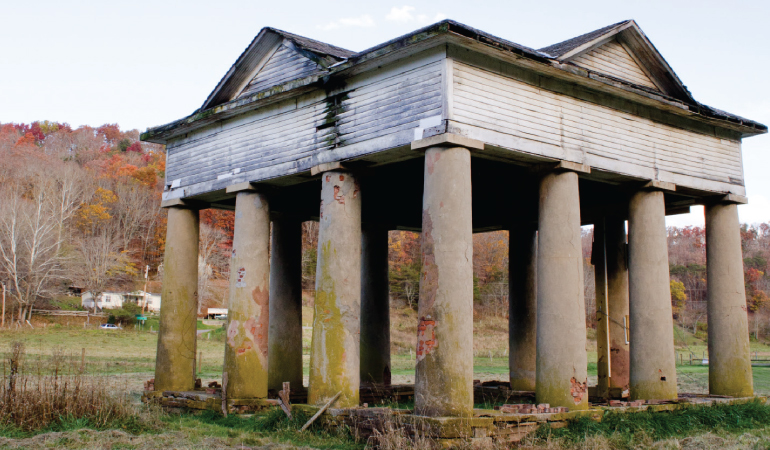 The Blue Sulphur Springs Pavillion, sometimes referred to simply as “The Blue,” is the last standing structure that was originally a part of a 19th-century spa resort known as the Blue Sulphur Springs Resort. The three-story high, 200-room hotel, built approximately between 1834 and 1838, attracted high-profile individuals such as some of the nation’s early presidents. A 2013 Charleston Gazette article reported that “Andrew Jackson, […] Martin Van Buren, Robert E. Lee, Henry Clay and Jerome Bonaparte, brother of Napoleon I of France” are of some of the historical figures that are known to have visited the spa1.

The Greek-style pavilion was built directly over a natural spring and was used by Dr. Alexis Martin, the spa’s resident physician, in prescribing the first mud baths in the U.S.2. The mineral water was also believed to provide healing of various physical ailments as well as nerve conditions. The resort, after experiencing less fruitful times, was eventually changed to a Baptist minister’s college and then used a Confederate army hospital during the Civil War until Union soldiers burned it down3.

No efforts of preservation have been made regarding the centuries-old structure until recently, thanks to the property’s landowner, who granted the structure and some land to the Greenbrier Historical Society. The miraculously standing pavilion has been classified as an endangered property by the Preservation Alliance of West Virginia and is currently being restored to its original grandeur2. The Greenbrier Historical Society chose the Mills Group to assess and make the plans for renovation: this plan includes reusing as much original material and incorporating interpretation of the pavilion’s history and restoration.4