This historic marker was dedicated in 1986 and commemorates the invention of the cotton gin by Eli Whitney in 1794. This invention reduced the need to remove seeds from cotton by hand—a time-consuming process that had precluded cotton from being produced on a large scale. Cotton gins made the processing of cotton much more economical than other fibers, giving rise to the growth of cotton plantations in the American South in ways that fueled the increase of chattel slavery in the early 1800s. Prior to the rise of cotton production, many leading Americans believed that slavery would slowly decline and be entirely replaced by free labor. After the invention of the cotton gin, American planters and slaves produced a total amount of cotton that doubled each decade from 1800 to 1860.

This historical marker was dedicated in 1986. 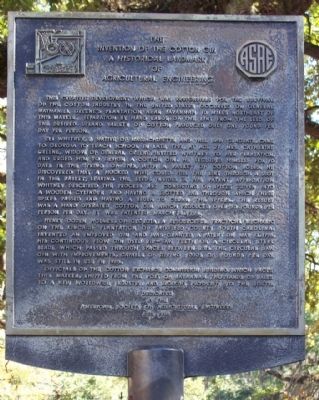 Eli Whitney was a native of Massachusetts and a Yale Law Graduate. He wanted to practice law but the need for income was more important at the time, so in 1792 he accepted an invitation from Catherine Greene (the widow of American Revolutionary General Nathaniel Greene) to work as a tutor on her plantation. There he learned how difficult it was for planters to remove the sticky seeds from the cotton. With Catherine's financial backing, Whitney spent the winter trying to figure out how to separate the seeds and eventually developed a gin. He received a patent for his invention on March 14, 1794. Henry Ogden Holmes improved the gin two years later and received his own patent in 1796.

The invention of the cotton gin spurred the growth of cotton production in the South and gave rise to the textile industry in the North. The invention had dire long-term consequences given its connection to slavery, but it also gave the United States an advantage in producing textiles at a time when Britain dominated the industry. As for Whitney, he did not make his fortune from his cotton gin but he did become rich after inventing a way to mass produce muskets.