The Cedar City Historic Rock Church sits on a lot prominently behind the local police station. Rocks from the surrounding area compose the building’s structure, which glow warmly as the sun descends over the hills. The church, still attended by local congregations of the Church of Jesus Christ of Latter-day Saints, is still being used in various fashions throughout the week. Completed by locals of the Cedar City area and dedicated on May 27, 1934 by LDS President Heber J. Grant, the Rock Church stands as “a monument to ingenuity born of the Depression years.” 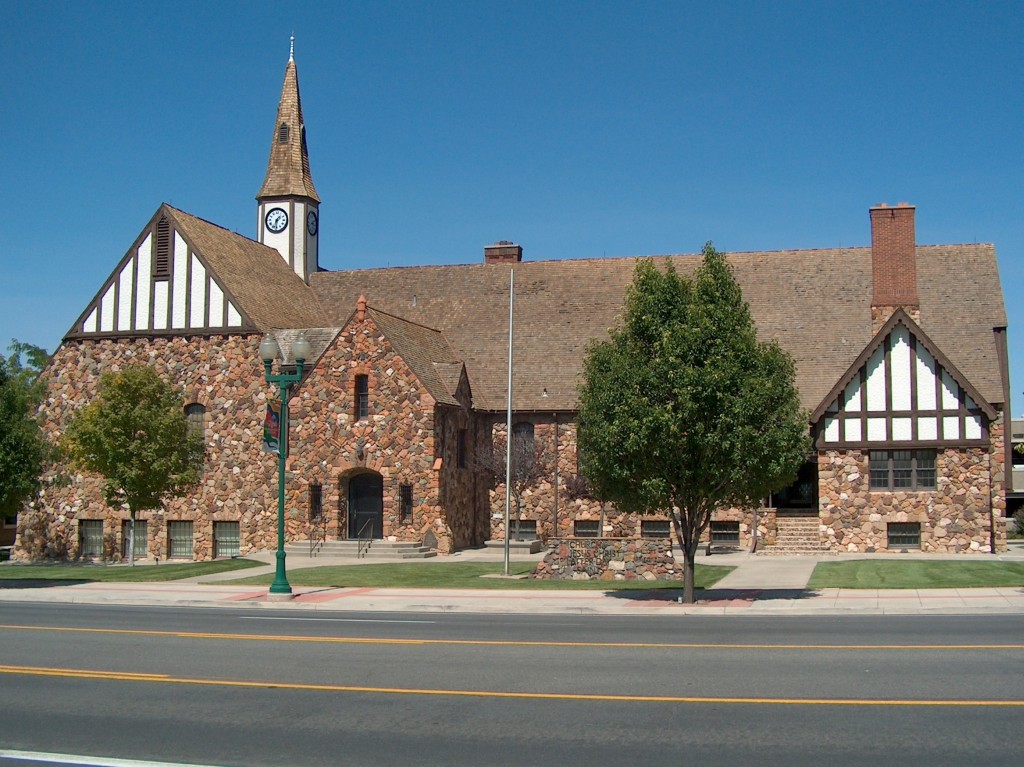 Of course, anything memorable must needs undergo a period of tribulation before being brought to fruition. The process began late in the 1920’s, when the U.S. government presented the idea to build a Federal Building in Cedar City. This idea filled the locals with excitement for “it meant added revenue and an opportunity for growth. There was a consensus reached to build the Federal Building directly where the Cedar City Tabernacle stood, though the decision was “not the government’s, but one made locally after months of negotiation.” One local Latter-day Saint congregation, the First Ward, met in the tabernacle to worship, but seeing as it “was in need of some extensive and costly repairs…it was agreed upon by everyone to sell [the] ground to the government.”

This decision to sell the property meant that a new meetinghouse must replace the old to accommodate the First Ward. Bishop Franklin B. Wood, local ecclesiastical leader for the First Ward, headed the project, and he and his counselors “were determined to build on the lot east of the tabernacle.” However, approval from church leadership in Salt Lake City was necessary before proceeding.

On May 13, 1931, as announced in the Iron County Record, church authorities approved the chapel plans. Bishop Wood and his building committee consisting of “Geo. A. Wood, Charles R. Hunter and William B. Adams, William V. Walker, Wallace Lunt, Warren M. Cox, Thomas Thorley, John Hopkins, Lafe McConnell and Alex H. Rollo…discussed plans and procedures for commencement of work.” They came to the conclusion that the chapel should be

Built out of local stone, a gray granite found near Iron Springs, to be used as trimmings for the arches, doorways, and windows. The other vari-colored rocks…found within a half mile of the chapel site…for spaces between and above the windows, and gable ends. It was also decided that local timber, yellow pine and spruce, would be used for all interior supports, joists, and rafters as well as sheetings and first floors.

George H. Wood, a local contractor and builder, was to supervise the work.

Around the same time, the Great Depression hit the United States, and Cedar City was not exempt. Still, the U.S. government purchased the old tabernacle site, and the Church received $45,000, which then “appropriated [$29,000]…to be used on the new chapel.” Not only this, but “contributions from individuals of the [First] Ward pledged with the total amount of $14,000.00.” Helen Foote, who spent some of her childhood in Cedar City, explained that “people who [were] dedicated members of the church would stretch themselves as much they could...Church was important.”

The First Ward banded together during this time. Because money to buy materials was a struggle, Bishop Wood declared that there would be an event for the congregation known as “Rock Week” from June 15-20. This event would be “a campaign of hauling rock for the walls of the chapel…and every member of the Ward…[who was] able to work single handed in assisting to load the wagons, [was] on hand to contribute their time and energies to this end.” The majority of the rock brought in came from “Bottle Rock,” in Coal Creek Canyon, almost two and a half miles away from town. This they did because the “material [was] all cobble rock of various hues and colors,” making it so that when “each rock…[was] broken in two, [it made] an excellent face…for laying in the wall.”

There was a good deal of energy and excitement for those involved, as well. Men who were working were “determined to bring in the most colorful rock…vieing with each other, and claiming…that the rock they deliver will be superior to that anyone else might bring in.” Despite the enthusiasm, most members did not work entirely for free, nor were they expected to. Helen Foote, whose father—Franklin B. Woffinden—assisted in the building of the chapel, remembers that her family and the community were paid in kind most days:

Anybody that had anything to share, they’d share it around and if you had fruit you’d trade it for vegetables…and there were people who had a little more money. And the ones that I ever heard of were very willing to share and make sure everybody had some food on their table. People were willing to trade food, or vegetables, or money for work.

Other processes went on to make sure the chapel neared completion. Iron was “mined locally for chandeliers and hinges were also used. Women wove wool carpets from homegrown wool dyed to harmonize with the cedar trim and pews.” “Bazaars, music concerts, bake sales, and auctions” took place to help finance the remaining costs of the chapel. Children “from nine years old up to 14 years,” sawed lumber−under supervision, of course−to make “a pretty fern stand or double deck table.” The children sold their works and contributed their earnings to the building fund. As well, the clock from the now vanished tabernacle—bought from Switzerland in 1861—now became a permanent reminder of the past, lying in the steeple of the new chapel.

The congregation laid the corner stone on November 15, 1931, and the opening day for the chapel held on February 22, 1934 where “over 1,200 people [attended] .” Dedicated by President Heber J. Grant on May 27 of the same year, he said in his remarks: “The Lord can only be pleased with the hard work, sacrifices and determination of everyone involved.” Bishop Wood also had the opportunity to speak, proclaiming, “I hope and pray that this chapel and Recreation Hall will always be used for which it was built for, the worship and wholesome recreation of all who enter, not only ward members, but strangers who may come seeking knowledge, also to be enjoyed by our friends, neighbors and our children for many generations.”

Today, Bishop Wood’s hope is living strong. To this day, the Cedar City First Ward continues to meet in the building, along with Twelfth Ward. Both of these congregations worship and use the recreational hall for many purposes, including “town meetings and wedding receptions.” The Rock Church stands as a beautiful monument to the dedication of the faithful residents of Cedar City not only to their God and leaders, but also to each other. Bishop Wayne K. Hinton of the Cedar City area in 1990 explained it best when he said:

The Rock Church is rather awe-inspiring, particularly when you think of the dedication of those people who built it in the midst of the Depression and the hand-labor that went into it…That causes us to contemplate and wonder at their commitment and dedication, to reverence the building and to be committed ourselves. It’s a unique, beautiful building with marvelous woodwork, and it’s also comfortable. That helps with the reverence as we worship.

This short drive through Cedar City begins at the Frontier Homestead Museum and State Park and includes several historic homes, museums, churches, and other landmarks.