The Sea Pines Forest Preserve was first inhabited 4,000 years ago by Nomadic Indians. Beginning in 1700 the location has been valuable for growing rice, indigo and cotton, and harvesting timber. In 1959, 572 acres were used to establish the Preserve by the Fraser family. Since then, the Preserve has expanded and improvements have been made. 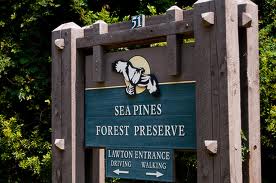 Nomadic Indians were the first to inhabit the Sea Pines Forest Preserve 4,000 years ago. These hunter-gatherers found shells in the salt marshes that were located in today’s freshwater wetlands. The Nomadic Indians were the ones to create the Sea Pines Indian Shell Ring. It is very likely this was a tribal plaza where they gathered for ceremonies and festivals. The area has been used for growing rice, indigo and cotton, and harvesting timber since 1700.

The Fraser family, who founded and developed Sea Pines, established a tract of 572 acres in 1959 for the Preserve. In 1970 legal covenants were filed dedicating a total of 605 acres for the wildlife habitat and outdoor recreation. Beginning in the early 1970s, trails were constructed on the Preserve. Construction of bridle paths, wetland boardwalks, observation decks, bridges and fishing docks followed. These additions have improved access to visitors and made the Preserve much more enjoyable.

With lakes located in the center of the preserve, Fish Island trail was built in order to allow motorist to drive to the lakes. The lakes were dug between 1968 and 1980. They are renowned for their birdlife and fisheries.

When visiting the Sea Pines Preserve visitors can expect to see the Indian Shell Ring located at the site of a 4,000 year old Indian Village. Acres of native flora bloom can be seen in the wildflower meadow near Lake Thomas. Marshes and wildlife can be viewed from the boardwalk and three observation decks at Old Lawton Rice Field. Traveling along the boardwalk through the Vanishing Swamp, visitors can explore a secluded forest.