The Sunset Grill is a restaurant created out of the former home of Uranium King Charles (Charlie) Steen. The restaurant has an amazing view that overlooks the breathtaking landscape of Moab, Utah. Unfortunately, in the early 1950s Moab was just a small farming community and as a result, this beautiful scenery of arches and canyon lands were places only a lucky few experienced. This all changed in 1952 when Charles A. Steen, geologist and prospector, made Moab known worldwide. 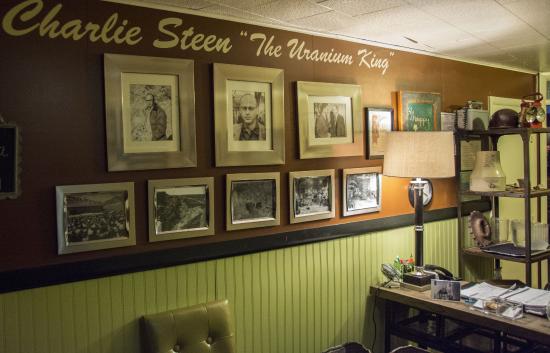 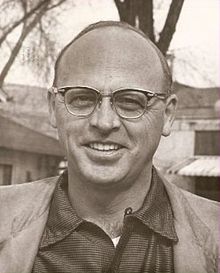 Moab, Utah is known throughout the nation for it’s beautiful scenery and proximity to the world-renowned Arches and Canyonlands National Parks.  However, a lesser known, but just as intriguing, monument sits high on the hillside, just off the north end of Moab’s main strip. The Sunset Grill is not only a restaurant that serves delectable plates of prime rib and fresh fish, but it also contains a history that is just as rich as its famous Chocolate Mousse Pie. The restaurant was opened in 1993 by John and Laurie Clayton, in honour of the late Charlie Steen.  The restaurant was the former residence of Mr. Steen and was remodelled to what we know it as today, the Sunset Grill.  Since its opening it has served guests from all over the world, doing justice to its legacy, as Charlie Steen was considered the “Uranium King.” His rags-to-riches story remains an essential part of Moab’s history.

Charlie Steen became famous when he gained a fortune after discovering uranium in the western United States. He grew up working as a typical labourer in the construction business.  However, his journey to fame began in a very simple manner. “Charlie was born Dec. 1, 1919 in Caddo, Texas, the son of Charles A. and Rosalie Wilson Steen. He worked his way through high school and college, attending first Tarleton College in Stephenville, Texas, where he and [his wife, Minnie Lee] met, and graduating from the Texas College of Mines and Metallurgy in El Paso with a degree in geology in 1943” (1). Charlie started working for Standard Oil, but was later fired for talking back to his boss, expressing his opinion, and wanting to do his own thing.  After becoming slightly depressed, he began to ponder about how he could make some money in order to support his family. At the time, he had three children with his wife expecting their fourth. He heard that the government was in great need of uranium and offering a large sum of money for the mineral. Charlie was determined to make a big find as he was very poor and needed the cash to support his family.

“On July 6, 1952, a geologist from Texas named Charles Steen, down on his luck and about to give up after two years of fruitless searching for uranium deposits in the area, finally struck it rich at his Mi Vida claim in Lisbon Valley southeast of Moab” (2).  Mi Vida turned out to be his largest uranium find. As cited, he was drilling just southeast of Moab in Big Indian Wash near Lisbon Valley which is currently a copper, natural gas, potash, and uranium mine. Charlie Steen had a sample of what he had drilled and later tested it with a friend’s Geiger counter. The sample made the needle go absolutely crazy and from that he knew that he had found some high-grade uranium. He soon made millions off his claim.

Charlie Steen privately funded his own uranium mill with 13 million dollars. This is the only mill to ever be privately funded. He was considered as a hero as he helped supply the U.S. with the Uranium it needed for its atomic bomb. The Times Independent characterized Charlie Steen as, “a man that struck it big when he made his largest uranium find, Mi Vida (my life)” (1). The article also shows us more of his heroic acts: it says that “for years he enjoyed being a popular figure in Moab and built many Moab homes, schools, and even donated $50,000 towards a new hospital” (1).  He wanted to leave his mark in Moab, and he did.  Steen built his mansion that many enjoy today as the Sunset Grill. His place was built for a quarter of a million dollars. It was built on top of red rock hill and is reached by driving up a long and steep drive. It had, and to this day has, the absolute best view from any restaurant in Moab; it is named because of the beautiful sunsets that can be witnessed from its patio.

Because of his drive, persistence, and great charity, many people have seen a more beautiful side of life.  He was a legend and his legacy, which remains in Moab, significantly influenced our great nation.  Charlie Steen is a very important and iconic feature who, by finding uranium, helped to establish what is now currently one of the top tourist attractions in Utah.  All those that visit the Sunset Grill learn more about his legacy and his generosity to help build the beautiful place that thousands visit each year.  The Sunset Grill is not only a great memorial to the “Uranium King”, but it also shows us that one simple man can make a huge difference in today’s society.  Thanks to Steen, many people have come to see the beauty of Moab and created their own personal memories there.