Union Depot was built in 1909 to serve trains operated by the Atchison, Topeka, and Santa Fe and the Missouri-Kansas-Texas Railroads. During the first two decades of the 1900s, the depot saw 16 passenger trains a day and numerous freight cars. It acted as an entrance to downtown Bartlesville for oilmen and entrepreneurs coming to the city in hopes of getting in on Oklahoma’s oil boom. Throughout its history, the depot has undergone several renovations, adding to its Mission/Spanish Colonial architectural style. Passenger rail service stopped running through Bartlesville in 1971, but today, the depot still serves the community, acting as the headquarters for the Bartlesville Regional Chamber of Commerce and the Bartlesville Development Corporation, as well as a gateway to Bartlesville’s railroad history and wider past.

Bartlesville's Union Depot was built in 1909. You can see the building's original red brick exterior here. 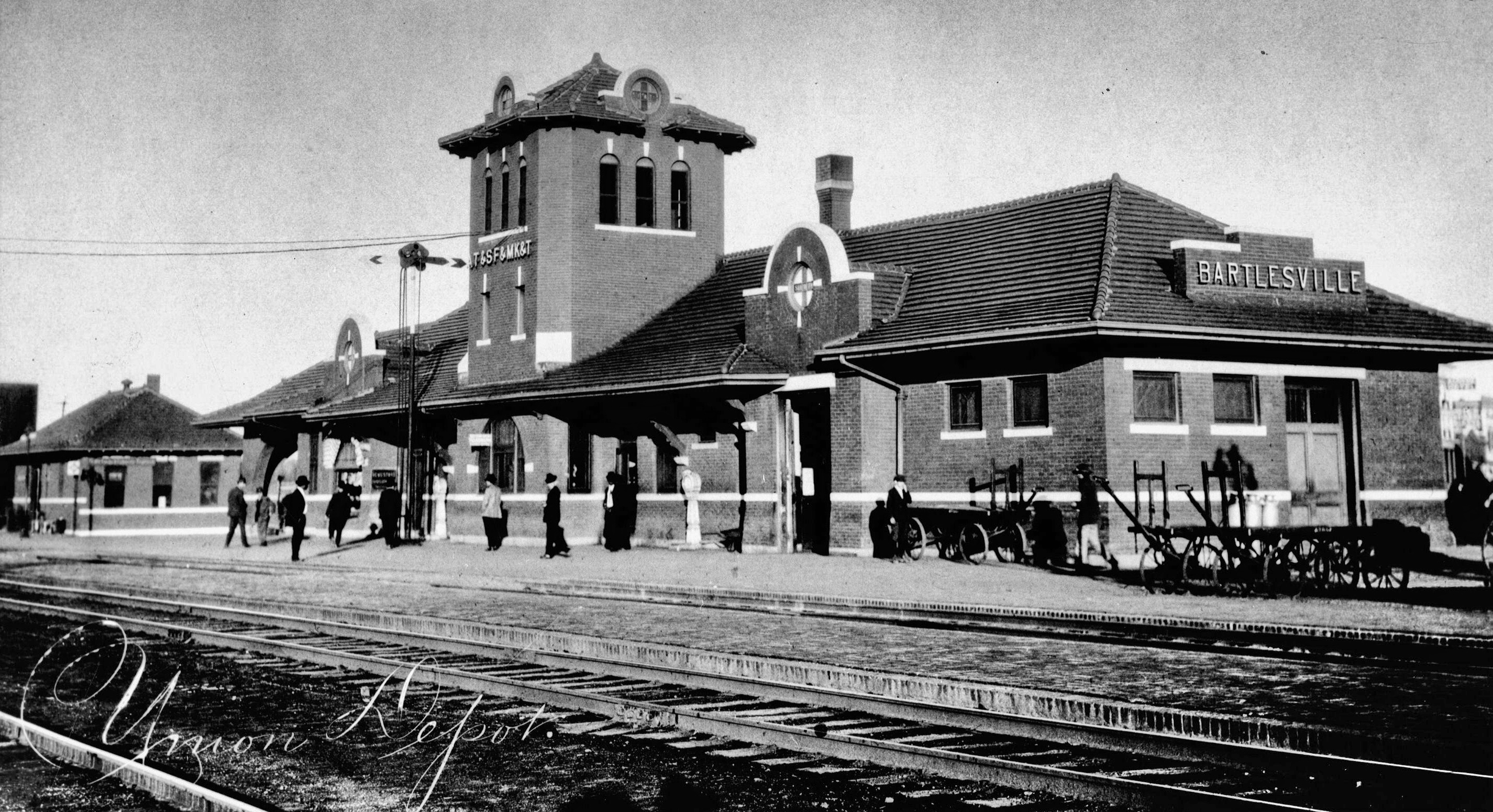 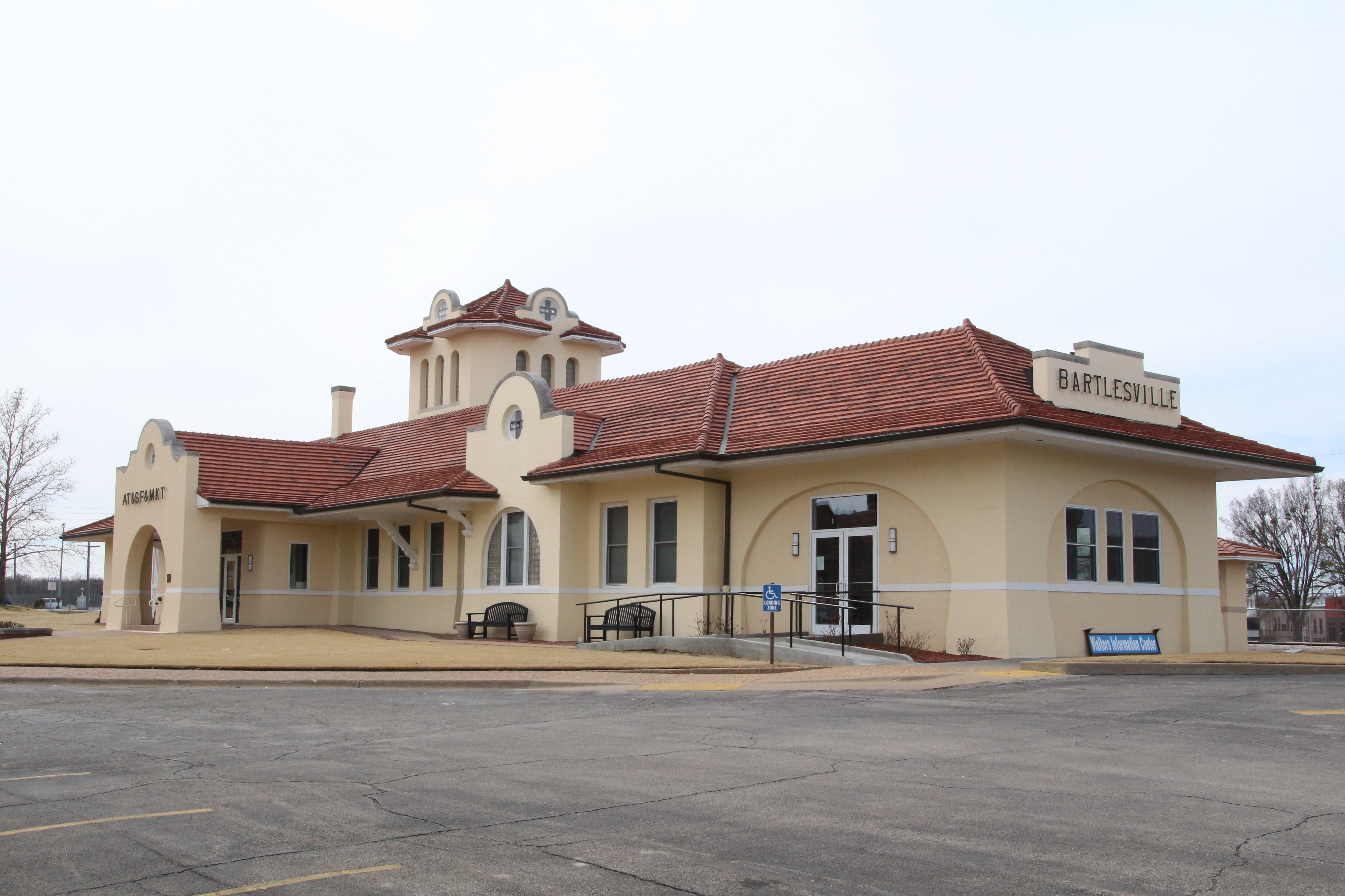 The Atchison, Topeka, and Santa locomotive 940 is the last train engine of its kind. 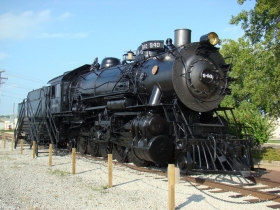 The railroad in Bartlesville acted as a passenger line and freight service. The Union Depot became the hub of that activity for the growing oil town after its completion in 1909. Originally built for $40,000 and constructed with red brick, the depot and adjoining tracks were large enough to accommodate an Atchison, Topeka, and Santa Fe line, as well as trains operated by the Missouri-Kansas-Texas Railroad. Before 1909, a smaller wooden frame building located a short walk south of the current facility acted as the train station for the town. However, Bartlesville’s growing oil business and steady population growth called for a more permanent structure to be built.

Rail service first came to Bartlesville in 1899, two years after oil was tapped at the Nellie Johnston Number One oil well. Jake Bartles, one of the town’s founders, was a strong advocate for the development of a railroad to Bartlesville. He hoped to have the line come right by his general store on the north side of the Caney River, but when the time came to begin laying tracks, the Santa Fe Railroad placed the line about a half-mile west of the river’s south bank, cutting Bartles off from the opportunities rail service was sure to bring. In response, Bartles moved his store about three miles north on the new line and founded a new town called Dewey.

The new sprawl of tracks throughout the Bartlesville region meant that the oil industry could officially take off. The Nellie Johnstone Number One was uncapped in 1899 and began producing hundreds of barrels of oil a week. Oil was also quickly tapped on nearby Osage lands that sat just to the west of Bartlesville. In 1900, tank cars first carried oil from Bartlesville north to a refinery in Neodesha, Kansas. During that same year, the Prairie Oil and Gas Company established a pipeline loading rack at the Bartlesville depot and laid pipeline to leases in Osage County, and in 1903, the company built a 35,000-gallon storage tank next to the station.

The discovery of oil and the incoming railroad changed Oklahoma’s landscape. Gone were the days of cattle drives. Now, livestock could just be placed on a train and shipped to northern markets. Old frontier merchants were also driven out, as goods easily flowed back and forth on dozens of train cars a day. During Bartlesville’s early years, 16 passenger trains came through the town every day, bringing men looking for work in the oil fields and speculators looking to get rich quick. Bartlesville was acting as the center of the Mid-Continent oil field, which spread out across Missouri, Oklahoma, and Kansas, and by 1904, 150 different oil companies listed the town as their headquarters. Like many other former frontier towns around Oklahoma, Bartlesville truly boomed from 1900 to 1920, with its population going from 698 at the start of the century to 14,417 two decades later.

As the oil business stabilized and automobiles became more common, passenger services slowed in Bartlesville, but the depot remained operational. The station had been built with Mission/Spanish Colonial style features, including a red tile roof and mission shaped parapets, and in 1946, the Atchison, Topeka, and Santa Fe Company renovated the building, adding stucco to the outer walls to match the company’s Southwestern image.

Railroad passenger service ended in Bartlesville in 1971. Today, about one freight train a day comes through the city, though the tracks around the depot are no longer used. The depot was sold to Phillips Petroleum Company, which, after renovating the site, donated it to the Bartlesville Regional Chamber of Commerce in 1984. Today, along with the chamber, the old depot houses the Bartlesville Development Corporation. The depot is also home to a renovated locomotive, tank car, and caboose. As part of an effort to preserve Bartlesville’s railroading past, the locomotive, which had sat in Johnstone Park for decades, was moved in 2008. The caboose followed in 2011 and the tank car joined the pair on the old tracks behind the depot in 2015. The towering Black engine is the last remaining Santa Fe-type “2-10-2” known to exist and has been preserved by numerous volunteers in 2010.

May, Jon D. Bartlesville, The Encyclopedia of Oklahoma History and Culture. Accessed May 2nd 2022. https://www.okhistory.org/publications/enc/entry.php?entry=BA026.

May, Jon D.. Washington County, The Encyclopedia of Oklahoma History and Culture. Accessed May 3rd 2022. https://www.okhistory.org/publications/enc/entry.php?entry=WA034.

This tour of downtown Bartlesville starts at the Nellie Johnstone Number One, the first commercial oil well in Oklahoma. It then takes you to some of Bartlesville’s most timeless buildings, moving north to south and cutting across downtown Bartlesville. The stops on this tour illuminate the city’s past as an oil boom town and the various communities that make up Bartlesville’s rich history. It also touches on a variety of historical themes, including segregation, political history, architecture, and sports history. The experience concludes at the Bartlesville Area History Museum, which you can visit Monday through Friday, from 8 a.m. to 4 p.m.