The World Golf Hall of Fame sets out to preserve and honor the history of golf and the legacies of those who have made it great. The Hall of Fame and Museum serves as a steward of the game through engaging, interactive storytelling and exhibits featuring artifacts, works of art, audio, video and photography important to the history of golf. It is a nonprofit institution and is allied with 25 national and international golf organizations, including The European Tour, LPGA, the Masters Tournament, PGA of America, PGA TOUR , The R&A and USGA. On May 19, 1998, the World Golf Hall of Fame opened in its newest home in St. Augustine, Fla. The Hall of Fame is the centerpiece of World Golf Village, a vacation destination with two championship golf courses.

The outside of the World Golf Hall of Fame. Photo from tripadvisor.com 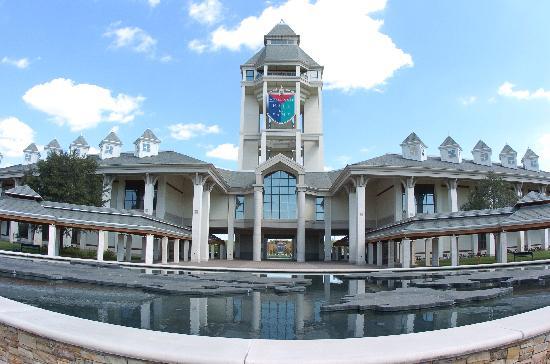 An exhibit at the World Golf Hall of Fame Museum. Photo from augustine.com

PGA TOUR Commissioner Deane Beman began to consider the benefits of having a PGA TOUR Hall of Fame near the TOUR's headquarters in northeast Florida and adjacent to the I-95 corridor in the late 1980s. Years later, after land for the project was finally secured, Beman called LPGA Commissioner Charlie Mechem and invited the LPGA to join with the TOUR in the project. The LPGA had a Hall of Fame for years on paper, but never a physical place where they could honor their great players appropriately. Once the LPGA confirmed to participate, the TOUR sought out other major golf organizations.

The USGA and the R&A agreed to contribute to the project, and the PGA of America then decided to close the former World Golf Hall of Fame in Pinehurst and consolidate it with the new project. Finally, the new World Golf Hall of Fame, at the World Golf Village in St. Augustine, was built. When people realized that this was no longer a PGA TOUR project but rather something beneficial for the whole world of golf, Beman and his associates at the TOUR decided that a new management organization was required, an entity that had the agenda of the promotion and honoring of the game's most significant contributors. The World Golf Foundation was formed, with an independent Board of Directors in 1994.

PGA TOUR Commissioner Tim Finchem was named Chairman, and the other major golf associations also had representation on the Board. It was always assumed that an outreach program would emerge from the Hall of Fame and the World Golf Foundation. It was Finchem's vision to bring the game of golf to youngsters who would never otherwise be able to experience the benefits and learn the values inherent in the game. Through his leadership, and the powerful support of Honorary Chairman President George H.W. Bush, The First Tee was planned in 1997. Today, the organization stands as the most successful youth outreach program in the history of golf.

"History of the World Golf Foundation." Accessed May 8, 2015. http://www.worldgolffoundation.org/about-wgf/history.

"Our History." World Golf Hall of Fame." Accessed May 8, 2015. http://www.worldgolfhalloffame.org/about-the-museum.