This Kensington Plantation House is one of South Carolina's more architecturally interesting and unique homes. It was built in the mid-1850s by Colonel Richard Singleton, the son of a wealthy cotton planter. The house is combination of the Second Empire style and a regular farmhouse design, reflecting Singleton's desire to have a unique home. Added to the National Register of Historic Places in 1971, it is currently not open for tours. 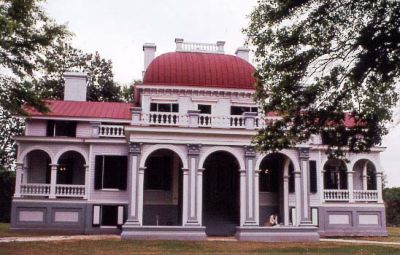 The land on which it stands has been owned by the International Paper company since 1981, which spent $1 million to restore the home. The company opened the house for periodic tours in 1984 and later partnered with the Scarborough-Hamer Foundation in 1996 to offer regular tours. This relationship ended in 2015 after an ice storm damaged the roof, severely threatening the interior and furnishings inside. The company asked the foundation to remove all of the items in the house, many of which were donated, to other locations. Thankfully, the company repaired the roof in spring of 2016. For updates about the house's potential reopening, check the company's Kensington Facebook page (below).